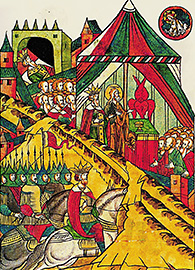 Like many, I was tempted to watch the television shows Lost and Battlestar Galactica (2004–09) when they aired. However, the reason I never did is that Battlestar Galactica ran for 75 episodes, and Lost for a whopping 121! Given my busy schedule, I could watch TV only sporadically, and I found myself unwilling to jump midway into a story that had already been running for several episodes or seasons.

So instead I gravitated toward movies, particularly trilogies or series whose movies could be viewed individually but could also be appreciated as part of a larger narrative. This way I could go to bed content after a two-hour flick that contained a beginning, middle, and end rather than lose sleep trying to cram 20 episodes of a miniseries into a weekend so that the story wouldn’t remain unresolved.

Maybe one can argue that the book of Isaiah, with its 66 chapters, is of the scale of a miniseries, but I like to think of it as on the scale of a movie series in the manner of Star Wars or Harry Potter. We can appreciate each section as a discrete unit as well as its contribution to the grand narrative.

In Chapters 34–35, we have in some sense a flashback to what has transpired in Chapters 1–33, and a “flash forward” to what will come in Chapters 36–66. In addition, we have the narrative of King Hezekiah in Chapters 36–39, which brings Chapters 1–39 to a completion and sets the context for Chapters 40–66. In other words, we will appreciate Chapters 34–39 not only on their own terms, but in terms of how these chapters contribute to the message of the book as a whole.

By the end of Chapter 33, we’ve arrived at the halfway point of the book. Ancient scribes recognized this as well. The Great Isaiah Scroll found at Qumran near the Dead Sea, comprising all 66 chapters of Isaiah, contains a three-line gap between Chapters 33 and 34, indicating that the scribe believed this to be a halfway point of the prophecy. The second half of the book of Isaiah begins with two chapters that are polar opposites of each other. Chapter 34 is downright scary, and Chapter 35 is glorious. How are we to make sense of these passages?

Chapters 34–35 are a poetic vision, and as such we as readers should not expect conventional rules of literality, chronology, and narrative. Images are key for understanding, and they are employed because they can be inclusive of themes and meanings that may otherwise be considered contradictory.

When reading these chapters, picture in your mind a diptych — a piece of artwork composed of two panels joined together by a hinge. Sometimes these diptychs would have sharply contrasting images or messages from one side to the other. Yet each side was never to be understood in isolation; the two sides formed a heterogeneous whole in which each side plays off the other.

So in Chapter 34 we have this frightening scene of God’s judgment upon Edom, and in Chapter 35 we gain a glorious vision of salvation in Zion. The following chart demonstrates how the chapters are connected and the contrasts [Author’s Note 1]:

In a manner similar to the role of Assyria and Babylon earlier in the book, Edom serves as a representative of the Gentile nations’ hostility toward God and his people, and is therefore deserving of wrath. The judgment Yahweh inflicts upon Edom in Chapter 34 is reversed, and in Chapter 35 restoration is granted for Zion. Both judgment and salvation are demonstrations of God’s “vengeance” (34:8; 35:4), and both are for Zion’s sake (34:8; 35:4).

God avenges, not for his own sake, but for the sake of his people and for their salvation. Not only must evil be dealt with and defeated in order to achieve salvation, but salvation itself is depicted as the reversal of judgment. That is, the very manner in which God inflicts judgment on Edom becomes the manner in which God heals Zion.

The takeaway from viewing both sides of God’s vengeance — judgment and salvation — is not, “If God is not for you, then God is against you,” or, “God is either your friend or he’s your enemy.” Instead, the lesson learned is, “God is both against your enemies and for you!” What Chapters 34–35 provide is hope. This is the hope that evildoers will be brought to justice, and the weak, blind, and lame will be restored to health. Yahweh has been, and always will be, the God of the oppressed, and he will bring redemption for them. God’s people need only to wait for the glory of the LORD to be revealed so that they can return in a grand homecoming.

Masters of Suspicion and Trust

In Chapters 36–39 we read a story of a king (King Hezekiah) and threats to the security of Jerusalem, a story that bears several similarities to Chapters 7–8:

On several occasions, Isaiah has already spoken of a Davidic king who would rule his kingdom with authority, justice, and righteousness, and protect Israel from threatening enemies (9:5–7). This king would possess the spirit of the LORD, fear the LORD, and place his trust in him (11:1–5). In 32:1–4, Isaiah announces a king who will reign in righteousness and justice, and bring safety and security to his people. Who could this be? According to the function of Chapters 36–39, one might conclude that Hezekiah embodies Israel’s messianic hopes. He reigns with justice and righteousness, and protects Jerusalem from Israel’s enemies. This assessment of Hezekiah is confirmed in 2 Kings 18:5–7a:

He trusted in the LORD the God of Israel; so that there was no one like him among all the kings of Judah after him, or among those who were before him. … The LORD was with him; wherever he went, he prospered.

What sets Hezekiah apart? Why is he so special? Is it his brains? Brawn? Wealth? Yes, he comes from the line of David, but we have already seen examples of Davidic kings, such as Ahaz, who don’t live up to this role. So what distinguishes Hezekiah such that some might identify him as the Messiah? It is his faith: He trusts in God. He is a man of prayer.

Ultimately, the assault on Zion is not on Israel’s military or political capabilities but on Israel’s faith and, therefore, on Yahweh. Rabshakeh, the Assyrian field commander, makes this clear in 36:4–10 and 36:12–20; and 37:8–13. According to Isaiah, the sin of Assyria is not military invasion per se, but blasphemy. The battle is not between the armies of Assyria and the armies of Israel. The struggle in Chapters 36–39 is not one of flesh and blood but one of faith. The word “rely/trust” occurs eight times in Chapters 36–37, so this will be a showdown of trust — whether to trust in the words of Isaiah or to trust in the words of Rabshakeh.

Faith is not the absence of doubt or suspicion. In our “postmodern” world, suspicion is king (and queen!). In the 20th century, three masters of suspicion — Marx, Nietzsche, and Freud — influenced some by (in)famously declaring “God is dead.” A Christian response is not to absolve ourselves of all suspicion. Christians can and ought to be suspicious of counterclaims to God’s truth. Faith is directing our suspicions and doubts in their proper channels. Hezekiah is to be suspicious of Rabshakeh’s counterclaims to Yahweh’s truth and instead place his trust in Isaiah’s prophecy. Faith is certainly not cynicism, but neither is it naiveté. True faith requires both trust and discernment.

To return to my opening analogy, if Isaiah were a movie series, after viewing Chapters 34–35, you might think you had rented the wrong DVD when you began viewing Chapters 36–39. Chapters 36–39 seem to have nothing in common with, and not to follow from, Chapters 34–35. Yet while a jarring transition occurs between these texts, taken together they communicate God’s intentions for his people. In Chapters 36–39, God makes it clear that it is for his own sake and for the sake of the Davidic king, in this case Hezekiah, that God preserves the city (37:35). What is this episode all about? God’s commitment to his Messiah and to his city Zion. What are Chapters 34–35 about? God’s commitment to redeem his city Zion.

What we see in Chapters 36–39 is a historical demonstration of God’s final destiny for Zion and his Messiah. But this is not the final eschatological fulfillment of these prophecies. We know this because there are another 27 chapters to the book! God’s ultimate Messiah and God’s final restoration of Zion are still to come. What we see in Chapters 36–39, then, is one fulfillment, one instance in which God’s intentions for his people became actualized. Or, in perhaps more familiar terms, this is one instance in which Matthew 6:9–10 is realized:

Our Father in heaven, hallowed be your name. Your kingdom come. Your will be done, on earth as it is in heaven.

Hezekiah’s responses to the Babylonian envoys in Isaiah 39:8 and Isaiah’s prophecy of coming exile (Isaiah 39:5-8) ought not to be understood as a lack of faith. Some view Hezekiah as a vain showoff vaunting his wealth before foreign emissaries and selfishly caring only for his own safety in the face of impending judgment. Perhaps this same story narrated in 2 Kings 20:12–19 ought to be understood in this manner, since 2 Kings tells the story how the failures of Israel’s kings led to the exile.

While exile is assumed to occur between Chapters 39 and 40, it is worth noting that, unlike in 2 Kings or Jeremiah, Isaiah never narrates the events of exile. Instead, in the book of Isaiah, Hezekiah is portrayed as an ideal king. Isaiah 39, then, should be viewed in the context of Chapters 36–38. In the previous chapters, the Davidic king is threatened by foreigners and sickness, and displays faith; and in Chapter 39 we see a picture of the righteous king ruling peacefully, as he ought. Now foreign nations come peacefully, to bring tribute rather than war. The prophecies of a peaceful Jerusalem, where the nations come in submission, are fulfilled in Hezekiah’s reign.