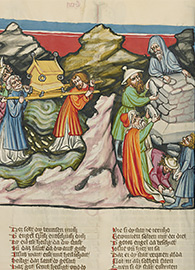 Psalm 121 is one of the shortest psalms in the Psalter — a mere eight verses — yet it succinctly relates how Israel is meant to view its covenantal God:

The idea of YHWH’s keeping watch over Israel in her “going out” and her “coming in” is probably meant to be a merism — a figure of speech in which two contrasting parts are used to encompass the whole. So, for example, when we read in Psalm 78, “May he have dominion from sea to sea,” it means “from one sea to the next, and everything in between.” The same goes for his watching over the “going out” and “coming in” that extends to wherever Israel may be at any time.

However, I think this psalmist’s statement is striking, because it represents well the connection between the unique events of the “Exodus” (the going out from slavery in Egypt) and the entrance into Canaan (the coming into the land of promise, where the LORD called them to rule and be a light to nations).

The glue that binds these two major events in the life of Israel is the guidance and protection of the LORD — who, just as the psalmist confirms, promises to be with his people; he reminds Joshua and his people two times in the book of Joshua, “I will be with you” (Joshua 1:5; 3:7).

Joshua 3:1–4:24, then, underscores the official step of “coming into the land” under the supervision of YHWH. There are two key parts to the story of the entrance into the land of Canaan. Joshua 3:1–17 narrates the miraculous crossing of the Jordan River, while Joshua 4:1–24 recounts the command of God that the people set up a memorial to commemorate this critical juncture in the life of Israel.

No Need for Dramamine!

Many interpreters of Joshua believe that the story of the crossing of the Jordan by Israel is the most important event in the book. Why is it so critical for the story? Let’s pause and jump to the end of the Bible for a moment.

In the book of Revelation, we are given a vision of the world at the end of the ages — what life will be like in God’s glorious eternity (Revelation 21:1–18). Streets of gold. Bejeweled walls. No sea …. Wait a minute. No sea? What does God have against the sea? Well, certainly he has no problem with water — it was used for rituals of cleansing and, eventually, connected to the Holy Spirit and new birth.

Nevertheless, in the ancient world, large bodies of water were sometimes viewed as symbols of chaos and evil. From the very beginning of the Bible — Genesis 1:2 — God separated the dark dome of “waters,” bringing order to chaos. We are told that Leviathan (yes, the sea monster) “frolics” in the murky sea (Psalm 104:26). Sea storms torment and sometimes kill sailors (Psalm 107; Jonah 1; Acts 27).

Remember, also, that when God grieved over humanity’s wickedness and decided to destroy the earth, he chose a flood of water as the means (Genesis 7), as if to bring chaos to bear again on earth, virtually undoing his act of ordering.

So when the Israelites stood before the Jordan River, which was positioned between them and the land “given” to them by their God, it was not a matter to take lightly. In fact, a close reading of Joshua 3 should cause the reader to make some key connections between the crossing of the Jordan and the famous parting of the Red Sea (as Israel fled from Egypt into the wilderness).

At the initial steps of the people of Israel into the Jordan, we are told that “the waters flowing from above stood still, rising up in a single heap” and that Israel was able to cross “on dry ground” (3:16–17; also 3:13). This language matches almost exactly the language of the Red Sea crossing (Exodus 14:16, 22, 29; 15:8, 9; see Psalm 78:13). As Israel looked back on these two key events, it was as if the seas, seen as the personification and embodiment of evil, had been conquered by YHWH:

When Israel went out from Egypt … Judah became God’s sanctuary, Israel his dominion. The [Red] sea looked and fled; Jordan turned back …Why is it, O sea, that you flee? O Jordan, that you turn back? …Tremble, O earth, at the presence of the LORD (Psalm 114).

There is another important connection to make. When Israel saw the “dry ground” appearing when the waters were divided, this may have made them think of God’s work of creation when he made dry land appear out of the watery abyss (Genesis 1:9). What would that communicate? In view of Israel’s marching into the land occupied by another group of people, it was a reminder, I am sure, that the God who is guiding them is the one God of the whole world, the creator of heaven and earth. Or, put another way, the God who “makes” (the seemingly uncontrollable sea as well as the land) is the same God who will “make” a way for his people.

The Jordan River became famous, after this threshold event for Israel, as a place where God did important and miraculous things:

The Ark of the Covenant

When the LORD had promised to be with his people — unlike the time of the wilderness journey to Mount Sinai — his presence wasn’t represented primarily in a fire or cloud. Israel carried the “ark of the covenant,” a special “box” that contained the Ten Commandments, remnant portions of the manna from heaven, and Aaron’s budding rod (see Numbers 17:1–11).

More importantly, though, Israel believed that the invisible LORD somehow was enthroned on the ark (see 1 Samuel 4:4; 2 Samuel 6:2). That does not mean that the Ark of the Covenant was an idol — it was not in the shape of YHWH (as he has no form), nor did the Israelites believe that he lived exclusively in or around this container. And idolatry, of course, was strictly forbidden.

However, in some special way, he was with his people with this ark. It was like the travel-vehicle of the LORD. The LORD was meant to go ahead of his people symbolically in this manner and lead the way beyond the Jordan.

It was not the bravest and strongest warriors who were sent first. It was the priests who carried the ark (3:6). In 3:4, we are told that the ark and the priests were supposed to go ahead of the rest of the people and they were to maintain a distance of two thousand cubits — that’s over half a mile!

The nature of the crossing of the Jordan, then, underscores two key points.

The 12 Stones of Gilgal

At the church that my family attends, we partake of the Eucharist every Sunday — that sacramental institution where you take bread and wine and “commune” with the LORD Jesus Christ. Why? Because he told us to. We are told by Luke and Paul that Jesus instructed his disciples to take the bread and wine as his body and blood “in remembrance of me” (Luke 22:19; 1 Corinthians 11:24).

I am sure Jesus set up this memorial institution because we are a forgetting people. In the famous hymn, Come Thou Fount, there is the memorable line: “Here I raise my Ebenezer, hither by thy help I’ve come.” Who is Ebenezer and why did God raise him? Actually, “Ebenezer” is not a who, it is a what. In 1 Samuel 7:1–12, we are told that the Israelites were able to overcome the Philistines in battle thanks only to God’s miraculous intervention.

So “Samuel took a stone and set it up between Mizpah and Jeshanah, and named it Ebenezer [which means the ‘stone of help’]” (7:12). Sometimes we need to carry out tangible acts of remembrance that give us a chance, later on in times of adversity and difficulty, to call to mind those works of God that teach us that he is present, he is loving, and he is strong.

In Joshua 4:1–24, a representative from each of the 12 tribes was called up to take a stone from the dry ground of the middle of the Jordan (as they were crossing) and set it up in the place where they camped on the other side (Gilgal). This is significant for several reasons.

Whenever my students comment that the Old Testament is dull or irrelevant, I am drawn to passages like Joshua 3–4 and I wonder how students react to these stories. As for Joshua 3, like Israel, we are constantly standing before great adversities and tumultuous rivers of decision and thresholds of the stages of our lives.

What does it mean to send the “ark” ahead of us? What does it mean to trust the God who stops mighty waters? Are there times when we think that he is our local God and forget that he is LORD over all — even the darkest, scariest, ugliest sectors of life? Dare we “sanctify” ourselves (3:5), carry out his presence into the world, and take hold of his promises?

What about the important act of remembering? Christians today, especially of the younger generations, are quite skeptical of institutions and rituals — “organized religion” is on the decline. We would rather be individuals who worship privately and without ritualistic actions.

That might be fine, except that Scripture reminds us (!) that we are a forgetting people. Stones need to be built for the same reason that Microsoft Outlook bleeps 15 minutes before a meeting that I would probably miss if I did not have that attention-getting device. For the same reason, my dentist’s office sends me an automated phone call the day before my appointment.

Whether it is celebrating Advent, baptizing a new believer, partaking of the loaf and the cup, or just lumping rocks together, there is nothing wrong with carrying out bodily, tangible expressions to remember something important; it is not different from celebrating an anniversary or birthday.

What can we do today, what sorts of things can we make, build, design, record, inscribe, and create, that will help our children, and their children, to remember the great things the LORD has done for us in our time and in times before us? Think about it.