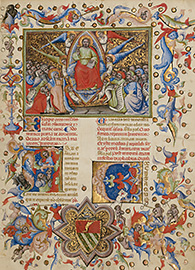 When one thinks of Israel’s status as God’s chosen nation, one might assume that Israel was to have little or no interaction with foreign nations, particularly when Israel was called to be holy — that is, set apart. Yet this is not the case. Genesis 12:1–3 demonstrates that Israel’s election from the outset was for the sake of the nations, and one cannot help but see constant interaction between Israel and other peoples throughout Scripture. So while Israel’s vocation might not be quite that of Seattle Pacific University’s mission of “Engaging the culture, changing the world,” one already sees in the Old Testament God’s concern for the nations.

We have already seen the nations play a prominent role in Isaiah 1–12, and this continues to be the case going forward. Chapters 13–23 are particularly focused on this theme, since this section contains oracles concerning foreign nations. Prophecies regarding foreign nations are oftentimes grouped together within prophetic books. The rhetorical formula “an oracle (maśśā’) concerning ____,” occurs 11 times within these chapters (13:1; 14:28; 15:1; 17:1; 19:1; 21:1, 11, 13; 22:1, 25; 23:1). The word maśśā’ is “a standard prophetic form of discourse in which the prophet attempts to explain how Yahweh’s actions will be manifest in the realm of human affairs” [Author’s Note 1]. Although the word means “burden,” in this case it ought not necessarily be taken in a negative sense, since some of the prophecies concerning the nations in Chapters 13–23 are positive.

Yahweh as God of Nations

Yahweh is neither for nor against the nations. Yahweh is already the God of the nations. God is neither xenophobic nor ethnocentric, and God’s people were not to have a policy of either isolationism or expansionism. Yahweh is opposed to pride and arrogance, whether demonstrated by foreign powers or demonstrated by God’s chosen people. Israel is God’s elect nation, but this role is one of instrumentality, so their privileged status is also one of responsibility. They are to be the means by which Yahweh extends his sovereignty and blessing over all the nations and creation.

What is clear is that these oracles concerning the nations have been organized in a manner that serves the theology of the book of Isaiah. They are not organized chronologically. Such is oftentimes the case with prophecies concerning the nations in prophetic books. What is important to observe in these cases is the manner in which these oracles were organized, and the function of this collection within the scope of the book. In Chapters 13–23, prophecies concerning Assyria occur in 14:24–27, even repeating the motif of Yahweh’s hand as stretched out (14:27; compare 5:25; 9:11, 16, 20; 10:4–5).

Prophecies concerning Syria and Ephraim occur in Chapter 17, quite a bit removed from Chapters 7–8, which narrate the Syro-Ephraimite crisis. Instead of Assyria it is Babylon — which did not pose a threat to Israel in the eighth or seventh century B.C.E. — that is first to be addressed in this section. What we see in Chapters 13–23 is a shift of perspective consonant with that of Isaiah 40–55. In the book of Isaiah, Babylon will replace Assyria as the preeminent threat to Israel and God’s purposes for the cosmos, and not only do Chapters 13–27 anticipate this shift, but they also describe the victory of the rule of God.

Viewed in this manner, Yahweh’s “consecrated ones” (literally “holy ones”), “warriors,” and “proudly exulting ones” mentioned in 13:3 are none other than the Babylonians, Israel’s pagan enemies. They compose the army of the LORD (13:4) and are the weapons of the LORD’s indignation (13:5). They will bring judgment upon the wicked and evildoers, and humble the arrogant and the proud. Historically it will be the Babylonians who will bring an end to Assyrian domination. With the death of Ashurbanipal [Author’s Note 2] in 627 B.C.E., the Babylonians began to revolt against the Assyrians, and in 612 the Assyrian capital Nineveh fell. For the next century, the Babylonians would be the dominant power in the Ancient Near East.

One might question the justice of God, especially when Babylonians kill infants (compare Psalm 137:9), rape women, and loot homes (Isaiah 13:16). In the book of Habakkuk, the prophet questions God’s decision to use the brutal Babylonians for his purposes. Habakkuk asks God — whose “eyes are too pure to behold evil” and who “cannot look on wrongdoing” (1:13) — how he can do such a thing. In Isaiah’s case, God demonstrates his justice by raising up the Medes (also known as Persians) to defeat and destroy the Babylonians (13:17–22). Whereas faith in Chapters 7–8 is to trust in God’s sovereignty to deliver, in these chapters faith is to trust in God’s sovereignty to judge. Chapters 13–14 anticipate the latter half of the book of Isaiah, where Babylon too will fall because of its wickedness.

Israel does not claim exclusive rights to be God’s agents in the world. We have seen that other nations, such as Assyria, can be commissioned by Yahweh to do his will. But the nations need to be cautious here; they must remember their standing in the cosmos. Claims of national sovereignty or theological nationalism are arrogant and outright false, since Yahweh alone is the sovereign one over all nations.

Once again, we are reminded how Yahweh is fundamentally opposed to all things high, lofty, proud, and arrogant (2:6–22) — whether it be the Assyrians (10:33–34) or the Babylonians (13:19; 14:11–15). For Israel to seek foreign alliances in hopes of national security is a rejection of Yahweh’s sovereignty, since doing so places one’s trust in the military strength of nations rather than in Yahweh, the LORD of hosts.

The End of the World as We Know It?

In 14:3–21, we read the taunt against the king of Babylon. This passage, like Ezekiel 28, which is an oracle against the prince of Tyre, has been interpreted to refer to the fall of Satan. In 14:12, the reference to the “Day Star” (NRSV) in the Septuagint (the Greek translation of the Old Testament) literally means “one who rises early in the morning,” and in the Vulgate (the Latin translation of the Old Testament) it was translated as “Lucifer.”

Early Christian interpreters associated 14:12 with texts that describe Satan as “a star that had fallen from heaven to earth, and he was given the key to the shaft of the bottomless pit” (Revelation 9:1; compare Revelation 8:10; Luke 10:18). It is this view that inspired John Milton to describe Satan’s fall from heaven in Paradise Lost [see Author’s Note 3]. So is 13:6–16 describing the end of the world and 14:3–21 speaking of the primordial world?

We have already seen that the judgment in Chapter 13 is cosmic in scale. The point that these chapters make is that the arrogance of Babylon violates God’s design for the whole cosmos (Chapter 14), and therefore its punishment will be cosmic in scope (Chapter 13). These chapters are not describing a primordial event, nor are they describing the end of the world; they provide a cosmic perspective on God’s judgment that takes place in history.

The remaining oracles concerning the nations are a collection of various prophecies that have been edited to contribute to the theme of Yahweh’s lordship over the nations. Isaiah 14:28–32 is an oracle concerning Philistia that took place in the year of King Ahaz’s death, which was in the mid-720s B.C.E. Whereas the original message was a warning to Philistia not to rejoice over the decline of Assyria, 14:32 indicates that their ultimate hope ought to be in Zion.

Isaiah 16:13–14 indicates that the oracle concerning Moab originates in the past, but now it has been set within the context of the Assyrian and Babylonian empires. Chapter 17 appears to originate from the Syro-Ephriamite crisis described in Chapters 7–8. The oracle explicitly addresses Damascus, but the mention of “Ephraim,” “Israel” (17:3), and “Jacob” (17:4) indicates that it is addressed to both Syria and the Northern Kingdom (Israel), if not more so to the latter.

Chapters 18–19 contain oracles concerning Ethiopia and Egypt, and they, unlike the other oracles in Chapters 13–23, include a prophetic symbolic action in Chapter 20, which provides the context to understand Chapters 18–19. Certainly Isaiah’s actions in Chapter 20 are bizarre and shocking, and it is difficult to imagine a purpose for them. Yet it is typical for prophets to engage in symbolic actions to illustrate and amplify their preaching (see, for example, Hosea 1; Jeremiah 19; 32; Ezekiel 4–5). For Isaiah, not only would his children serve as signs (8:18), but now he would as well. His nakedness reinforces the warning of the defeat of Ethiopia and Egypt in 18:1–19:16. God’s people are not to put their trust in Egypt, Ethiopia, or any other foreign power (compare to 30:1–7; 31:1–3).

Unfortunately the ancient practice of “saber rattling” continues today. Whether by politicians, CEOs, celebrities, athletes, generals, intellectuals, talk show hosts, bloggers, or even religious leaders, we are inundated with a lot of big talk. Add to this pride a layer of self-interest, and one hears attempts to theologically justify boasts of nationalistic, religious, socio-economic, racial, and sexist/sexual exceptionalism. In David Brooks’ 2012 address to SPU, he spoke of how our culture has shifted from one of self-effacement to self-advertisement. Bragging has become the norm and possibly even a virtue.

Isaiah 13–20 reminds us that not only is Yahweh the God of his elect, but he is sovereign over all peoples. Our response to this passage ought to be one of humility and openness. Who knows? God may use the unexpected to accomplish his purposes. In Romans 9–11, the Apostle Paul reminds the church that though the Jews were God’s elect people, it was because of their unbelief that he decided to include Gentiles. Paul instructs Gentile Christians not to grow smug, but instead to acknowledge the severity and kindness of God, since God can use anyone to accomplish his will, even the wicked.

Marvin A. Sweeney, Isaiah 1–39 With an Introduction to Prophetic Literature; The Forms of the Old Testament Literature 16 (Grand Rapids: Eerdmans, 1966), p. 22.