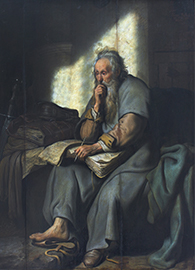 What’s Wrong With This Picture?

I learned about the book of Acts in a cramped and damp classroom tucked in the corner of our church basement, next to a belching oil furnace. When we got to Acts in our Sunday school curriculum, we only skimmed chapters 21–26 — for good reason. The energy of Acts fizzles at this point. Paul’s famed missionary journeys are over, so the maps tacked on our baby-blue classroom walls were no longer required viewing. And this section is filled with inscrutable names like Felix, Festus, Agrippa, and Bernice.

To perk you up, I’ll give another quiz, like on our first day together. A fill-in-the-blanks quiz. Feel free to read through the chapters in Acts before (or even while) taking this quiz. I don’t mind.

Answer to question #1. What would you expect to read after, “they praised God and …”? Something similar to when Peter, as Paul does now, told the Jewish believers in Jerusalem about God’s work with Gentiles? “When they heard this,” the Jewish believers in Jerusalem “praised God, saying, ‘Then God has given even to the Gentiles the repentance that leads to life’” (Acts 11:18). Now that’s what should follow praise!

If you answered with words like these, you were wrong. James’ response to Paul sounds more like sibling rivalry than brotherly love and keen interest: “You see, brother, how many thousands of believers there are among the Jews, and they are all zealous for the law” (Acts 21:20).

Ouch! Paul tells James in painstaking detail about God’s work among the Gentiles, and James responds with rival claims about the size and devotion of his own church in Jerusalem: thousands of zealots for Torah! Torah! Torah!

After three successful journeys, Paul lands in Jerusalem with a thud. James lets Paul know his reputation is a threat to the zealous thousands, because word has gotten around that Paul is preaching against Torah and temple. What threat?

Remember Stephen, whom some Jews accused of opposing temple and Torah (Acts 6:11–15)? What happened when these charges were laid against Stephen can’t be lost on James, head of the Jerusalem church: “That day a severe persecution began against the church in Jerusalem” (8:1). James is anxious this time around to avoid another large-scale persecution. So Paul, to demonstrate that he’s a faithful Jew, has to pay for other disciples to fulfill their Jewish vow (8:22–26). Welcome home, Paul!

Answer to question #2. Paul starts in Jerusalem and travels north to Caesarea, about 80 miles. On his second journey, Paul managed to travel 80 miles — from Athens to Corinth — in a single verse! “After this Paul left Athens and went to Corinth” (Acts 18:1). Now 80 miles takes him six chapters. His journeys have come to a screeching halt. Paul’s back in Jerusalem, and he’s going nowhere fast.

Answer to question #3. More than two years. These six chapters contain increasingly discouraging chronological markers. At first, Paul’s Jerusalem sojourn occurs on a day-to-day basis: “the next day” (22:20) or “in the morning” (23:12), even “nine o’clock tonight” (23:23). But once he is transferred in the dark of night and under close guard to Caesarea, progress slows to a crawl. Paul waits “five days” just for the high priest, his prosecutor, to travel from Jerusalem (24:1).

Then, smack in the middle of agonizing inactivity, Luke twists the knife. “After two years had passed,” Luke tells us, “Felix was succeeded by Porcius Festus; and since he wanted to grant the Jews a favor, Felix left Paul in prison” (Acts 24:27). A political favor holds Paul hostage, despite his energy, enthusiasm, and passion for mission.

Answer to question #4. A “whitewashed wall” (Acts 23:3). This is not Paul’s finest hour. He has just been slapped on the mouth, and he doesn’t know the order came from the high priest Ananias. So Paul backtracks.

Earlier, the Roman tribune ordered Paul to be flogged — no wonder Paul’s frustrated — without knowing Paul was a Roman citizen who shouldn’t be flogged. The tribune backtracked, too (Acts 22:22–29).

These chapters are full of such mistakes and mistaken identities. It’s a time of political confusion, with Paul passed around like a hot potato. The note of confusion underscores Paul’s fragile circumstances and uncertain future.

Answer to question #5. Zero. Zilch. Nada. The holy spirit doesn’t appear, act, reveal, fill, outpour once in these chapters. Never. Odd in a book whose outline promises the presence of the holy spirit from Jerusalem to earth’s wide bounds. What’s going on?

Well, you might want to assume the holy spirit is present. But Luke doesn’t assume this. Otherwise, why would he point out those times when the holy spirit filled speakers (e.g., Acts 4:8) or got lied to (5:3) or fell upon people (10:44–45) or crafted compromises (15:28)? Luke pinpoints the spirit’s presence at key moments in the history of the church. The spirit’s absence in Acts 21:18–26:32, therefore, is conspicuous. [Author’s Note 1] Not a single moment of inspiration captures our attention in the last quarter of the book of Acts.

Why the sudden drop off? Let me take a stab at this, though I may well be wrong. You make the call.

Earlier, while saying goodbye in Miletus to the Ephesian elders, Paul mused,

And now, [having been bound by the spirit] [Author’s Note 2], I am on my way to Jerusalem, not knowing what will happen to me there, except that the holy spirit testifies to me in every city that imprisonment and persecutions are waiting for me (Acts 20:22–23).

Paul refers here to prophets who predicted that suffering waited for him in Jerusalem. [Author’s Note 3]

Then, just before landing in Jerusalem, Paul visited the church in Tyre for seven days. “Through the spirit,” Luke writes, “they told Paul again and again not to go on to Jerusalem” (21:4). These few words intensify the warnings Paul has already received.

Yet he does. Paul heads to Jerusalem after having rejected the recurring and decisive words of prophets in several cities and the entire community in Tyre. Is it possible — let me underline that I’m not sure about this — Paul’s headstrong effort to be in Jerusalem in time for Pentecost was not inspired by the holy spirit? Perhaps the holy spirit wanted him to avoid Jerusalem altogether.

Has Paul messed up? Did he languish for two years because of his own stubbornness? These questions, as disturbing as they are, open up a remarkable window to God’s grace. In the book of Acts, we have a room with a view — a view of how deftly God works through the foibles, faults, and failures of human beings and institutions.

What’s Right With This Picture?

Despite Paul’s stubborn refusal to listen to the holy spirit, the gospel advances. And that lesson is what we can take away from the infuriatingly sluggish pace of these chapters.

Bureaucrats who do God’s bidding. My head spins when I try to keep the politicians in Acts 21–26 in order.

Not a very effective lot, yet terribly effective (if haltingly slow) in moving Paul from Jerusalem to Caesarea and, eventually, to Rome. Without an ounce of piety, a gram of devotion, a pinch of the holy spirit, they nevertheless help to fulfill God’s promise of mission to the earth’s ends (1:8).

We mustn’t be fooled by the apparent absence of God, the effortless ability of human beings to slow mission to a crawl. We mustn’t be fooled by these experiences into thinking God is not furiously at work behind the scenes. God is. Not just in tangible miracles, explosive growth, and storied success, but in the wake of our stubborn refusal to hear the holy spirit, in dank prison cells, where we wait years on end for nothing to happen, even in the apathetic hands of indifferent bureaucrats. We must never be hoodwinked into thinking God’s hands are tied. Never.

A seasoned missionary. Paul has grown up. When he lands in Jerusalem, bested by James and told to pay for the purification rites of other Pentecost pilgrims, Paul does so without a moment’s hesitation (Acts 21:17–26). He now knows the value of compromise.

Paul has matured in another way. Once able to hold throngs spellbound in the synagogue and agora, he is content now to speak to an audience of one, even if governor Felix listens for the wrong reason — hoping for a bribe (Acts 24:26). Paul delivers his final speech before a slender audience consisting of Agrippa, Bernice, Festus, “and those who had been seated with them” (26:30).

Their response is tepid. Agrippa’s reply drips with sarcasm, “Are you so quickly persuading me to become a Christian?” (26:28). There are no conversions, no dramatic claims to repentance.

The size of Paul’s audience has shrunk. The occasion for his speeches has shriveled to self-defense. Yet Paul, the seasoned missionary, is still insanely intense. He pleads with Agrippa, “Do you believe the prophets? I know that you do” (Acts 26:27), and he begs all of them to “become such as I am — except for these chains” (26:29).

A growing conviction. When the pace slackens, we have the luxury of learning something else about Paul, something we’d miss if we only saw him running about from city to city. In all of this waiting, Paul is growing —not weakening — in his conviction that God has called him to the ends of the earth.

We see this in the speeches Paul delivers before the Jews of Jerusalem (Acts 22) and Agrippa, Bernice, and Festus (Acts 26); in both Paul talks about his Damascus Road experience (Acts 9). Take a look at what Jesus says to Paul in each of these:

It takes just a glance to see that God says a whole lot more in Acts 26 (the second speech) than in either Acts 9 (the story) or Acts 22 (the first speech). What’s happened?

And what did Paul do for two years? That’s obvious from reading the speech in Acts 26. He read and reread his Bible. Most of the expansion — Paul’s clearest expression of his call — in Acts 26 is a wonderful mishmash of prophetic texts: Ezekiel 2:1, Jeremiah 1:7–8, and Isaiah 42:7 and 16. [Author’s Note 6]

Paul’s call to the Gentiles dawned on him slowly, as he travelled, prayed, preached, and studied. Time in prison wasn’t time away from God. Time in prison was time in God’s word, time to understand at the deepest level what God had called him to. Paul discovered the full scriptural, prophetic dimensions of his life’s work only when he languished in prison. What may look to us like a prodigious waste of time were possibly the most productive moments — two years of enforced inactivity — in Paul’s life. If his waiting seemed like an eternity, eternity opened to him as he waited.

Actually, the spirit isn’t mentioned until the very end of Acts (28:25), and even there the spirit is said to inspire the ancient prophet Isaiah — not Paul himself.

My translation. The words “having been bound by the spirit” are ambiguous about the spirit in both Greek and English, like what Luke writes earlier, “Paul resolved in the Spirit” (19:21). Is Paul bound by his own internal conviction? Is he bound by the holy spirit? Is he bound by some deep concord between the core of his being and the divine guide? Neither Luke’s words earlier, in Acts 19:21, nor Paul’s here, in Acts 20:23, ultimately clarify the particular way in which Paul is bound.

Some of these are from the Greek Old Testament, the Septuagint, which Luke used when he composed Acts.

<<Previous Lectio   Back to Acts   Next Lectio>>