Water From the Rock: Numbers 20 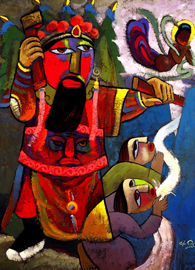 Why Moses Is Not Allowed to Enter the Promised Land

I have always thought that point number one makes this one of the saddest chapters in the entire Old Testament. Moses has long been Israel’s faithful leader and intercessor, through many difficult ordeals. Moses has had a close and intimate relationship with God — he has done what God commanded him to do, he has pleaded with God on behalf of the people time and again, he has been a prophet for God (Deuteronomy 34:10) and a friend of God (Exodus 33:11).

We are given a reason in verse 12 why Moses cannot enter the land, though the logic does not take away the heartrending nature of this punishment. But perhaps that is not a surprise: even when things make sense or can be explained through reason, they still can cause us grief.

Some note that what Aaron and Moses do in this chapter is the climax in a series of rebellions in the book of Numbers, starting with the rebellion of the people in Numbers 14 and followed by a rebellion of the Levites (led by Korah) in Numbers 16–17. Still, though the consequence of Moses’ action is clearly identified in 20:12 (and 20:24), the exact act of rebellion is less evident. A close look at what happens gives some clues.

The Significance of Kadesh

Numbers 20 starts by telling us about Miriam’s death — but only briefly, in just five Hebrew words. No reason is given for her death, nor is there any mention of mourning for her [see Author’s Note 1]. More information is given about the Israelites’ location, at Kadesh in the wilderness of Zin.

This spot is significant because the last time they were there was in Numbers 13–14: Kadesh is where the people rebelled after hearing the (false) report about the Promised Land from the spies. Numbers 20:2 introduces a familiar problem — there is no water, and so the people complain. This happened immediately after they were led through the Reed Sea, in Exodus 15:22–25. It also happened in Exodus 17:1–6. Even the content of the people’s complaint should sound very familiar to us by now: they wish they had never left Egypt.

Apparently the Israelites still do not understand how ludicrous is it for them to keep wishing they were back in Egypt, the place where they were slaves. Their complaint here also expresses their lack of trust in God and Moses. Though no water in the desert is, indeed, a serious difficulty, their spiritual amnesia means that they do not remember God’s provision of water in the past.

Moses and Aaron also do something familiar: they fall on their faces before God (20:6), who then appears to them and gives Moses a very specific set of commands: take the staff [see Author’s Note 2]; assemble the Israelites; and, before their eyes, order the rock to yield — or give — its water. The end of Verse 8 concludes: “Thus you shall bring water out of the rock for them; thus you shall provide drink for the congregation and their livestock.” Moses and Aaron start off well: 20:9 tells us that Moses takes the staff “as [God] commanded him.”

In 20:10 they assemble the congregation — so far, so good! — but Moses speaks, not to the rock, but to the Israelites, saying, “Listen, you rebels, shall we bring water for you out of this rock?” Then Moses strikes the rock two times (20:11). The desired result happens — water miraculously comes out from the rock. Verse 11 even emphasizes that it comes out “abundantly,” with enough for the congregation and their livestock.

Because you did not trust [see Author’s Note 3] in me, to show my holiness before the eyes of the Israelites, therefore you shall not bring this assembly into the land that I have given them.

The medieval rabbis gave a number of different explanations for how Moses lacked trust, and the following are worth noting [see Author’s Note 4]:

We can add to the first explanation that when water was provided from the rock in Exodus 17, Moses was commanded to strike the rock (Exodus 17:6). Some believe that Moses acted out of haste in Numbers, or just assumed that God commanded him to do the same thing now as then, and his lack of trust was seen in that he did not carefully listen to the command this time.

Others assert that Moses doubted that God could bring water from the rock if he only spoke to it, so Moses took matters into his own hands by striking it. One rabbi pointed out that because Moses was told to “take the staff” (Numbers 20:7), Moses would have expected to use it, because every other time the staff was used, “striking” was either specifically mentioned or implied (Exodus 7:17, 20; 17:5–6).

With respect to the second explanation, we might also remember that Moses seemed to doubt God’s ability to provide enough meat for the Israelites in Numbers 11:22, asking God, “Are there enough flocks and herds to slaughter for them? Are there enough fish in the sea to catch for them?” But then Moses was having a private conversation with God, whereas, in Numbers, Moses publically expressed his doubt before all the Israelites. Additionally, after seeing that God had provided more than enough quail, Moses should have trusted that God could similarly provide water.

The third explanation also needs some comparison with the parallel account of water being provided in Exodus 17. In Exodus 17:6, God stood before the 70 elders upon the rock, so when Moses struck the rock they could see God’s presence. But in Numbers 20, God’s presence had appeared only to Moses and Aaron (Numbers 20:6), so that when Moses asked, “shall we bring water?” there was no visible evidence for God’s involvement.

In other words, in a direct address to the Israelites, Moses ascribes miraculous powers to himself and Aaron instead of to God. In a single Hebrew word, notṣiʾ, “we shall bring forth,” Moses and Aaron might even be interpreted as putting themselves in God’s place. Thus, Moses does not just go against God’s command; his word could be interpreted as a denial of God’s essence, not showing God’s holiness before the eyes of the Israelites (20:12). The seriousness of that last failure is highlighted when the following verse repeats that it was by the waters of Meribah that the Lord “showed his holiness” (20:13).

The text here does not linger on what happened, but moves to tell about Israel’s attempt to move toward the land of Canaan through Edomite territory. The Israelites ask nicely for permission to pass through, sending a formal message (20:14). They attempt to garner sympathy, mentioning the hardships they have been through (20:14–16). They promise to stay on the main road, not trespassing through Edomite fields or vineyards, not even drinking water from their wells (20:17, 19).

But Edom refuses the request, going so far as to come out against the Israelites “with a large force, heavily armed” (20:20) [see Author’s Note 5]. This brief section has echoes from Genesis 32–33, when Jacob (otherwise known as Israel) prepares to meet Esau (otherwise known as Edom) after Jacob stole Esau’s birthright and blessing [see Author’s Note 6]. Despite Jacob’s concerns, which are not without warrant, Esau is gracious and forgiving: running to meet him, embracing him, falling on his neck and kissing him (Genesis 33:4).

Indeed, Jacob responds to Esau by telling him that, because Esau received Jacob with such favor, “truly to see your face is like seeing the face of God” (Genesis 33:10). In Week 7 of the Genesis/Exodus Lectio, Dr. Spina referred to this reconciliation as “radical.” But this seemingly warm reunion is followed by Jacob’s refusal to continue to journey with Esau by his side (Genesis 33:12–17). And the chill between Israel and Edom gets increasingly frostier until the book of Obadiah. Thus the description of Israel turning away from Edom (Numbers 20:21) is not only geographical, but relational.

The Death of Aaron

As the chapter concludes, the Israelites move south, from Kadesh to Mount Hor. Here, God tells Moses and Aaron of Aaron’s impending death, as a consequence for what happened at the beginning of the chapter: “because you rebelled against my command at the waters of Meribah” (20:24). All Israel watches as Moses, Aaron, and Aaron’s son Eleazar ascend the mountain (20:27), where Moses strips Aaron of his priestly garments and puts them on Eleazar, and Aaron dies. Then the Israelites mourn Aaron for 30 days — a noteworthy detail, because the typical length of mourning is seven days.

Again, this is a sad chapter, with the sin of Moses and Aaron enveloped in the deaths of Miriam and Aaron. Things do not seem to be going well for the leaders of Israel, nor for the rest of the congregation.

The geographical journeys through the book of Numbers, however, tell of more than just physical progress. Chapters 10–14 detailed the travel from Sinai to Kadesh, which began in high spirits but ended in disaster. This last phase of the wilderness trek from Kadesh to the steppes of Moab, by contrast, begins in gloom, but will end in blessing, as the next Lectio will show.

Additionally, it is important to note what 20:11 tells us about God: despite the error made by Moses, God gives Israel the water it desperately needs. In other words, even when God desires people to act and behave in certain exact ways, human behavior and human failure do not prevent God from providing.

This is in contrast to the reports of mourning when Aaron dies (Numbers 20:29) and when Moses dies (Deuteronomy 34:8).

It is not entirely clear whose staff is being referred to. Aaron had a staff that was used during the miracles of the plagues in Egypt (compare Exodus 7:9–12; 8:5, 16–17). God’s preference for Aaron over Korah was illustrated in Numbers 17:8 when Aaron’s staff  sprouted buds, blossoms, and almonds, and it was then to be kept before the ark (Numbers 17:10). Our text tells us that Moses took the staff  “from before the LORD” (20:9), so that could be Aaron’s staff, before the ark of the Lord. Then again, 20:11 seems to suggest that the staff belonged to Moses, clarifying that Moses “struck the rock twice with his staff” (italics mine). Moses’ staff was — like Aaron’s — used to perform miracles in Egypt. Exodus 7:15–17 tells us that it was when Moses struck the water of the Nile with his staff that the water turned into blood. Even more relevant, Moses’ staff was used in Exodus 17:1–7, in the previous instance of drawing water from a rock.

What NRSV has as “heavily armed” is literally, “mighty hand,” as in Exodus 13:9.

The connection is made explicit by the language used at the beginning of Israel’s message to Edom, “Thus says your brother Israel” (20:14).