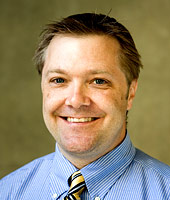 This quarter, the SPU community has been going through the book of Genesis, and this week we began of the narrative of Joseph. So this morning I want to read through Genesis 37 and then offer a few brief reflections.

We see a pattern in this chapter, one of disadvantage, dream, and despair. It is a theme that is not uncommon in Scripture — an unlikely character finds himself or herself, after some miraculous experience, called to do great things, only to be bitterly and tragically disappointed at the reality of what comes to pass.

We find that threefold pattern to be the case here in Genesis 37.

First, Joseph is at a disadvantage. He is the youngest (or next-to-youngest if you count Benjamin) of his brothers, all of whom despise him. Why do they despise Joseph? Because he is especially loved by their father, Jacob. The great love that Joseph’s father has for him makes life difficult.

This was especially true for someone else in Scripture, someone else who was loved by his Father but hated by those around him. And the same is often true for us. Sometimes, loved as we are by our Father in heaven, life can be hard for us because we are given responsibility to love others, even those who hate us.

Second, Joseph has a dream. He has a vision, given to him by God, that he shares (perhaps not very wisely) with his brothers, maybe in an effort to gain their acceptance or respect. This vision reveals that one day he will rise in stature, that one day he will be in a position to bless others. Of course, this dream serves only to make his brothers scoff and resent Joseph all the more for his impertinence.

This was especially true for someone else in Scripture, someone else who told others that he was in a position to bless them, a pronouncement at which others laughed and for which they hated him. And the same is often true for us. Sometimes, when we are given a clear vision of what God intends for our future, we see that our lives will be very good, lives that God will use to bless others, but we also see that our lives will not be very easy.

Third, despair finds Joseph. He encounters his brothers and they beat him. His beautiful robe, a mark of his father’s love, is torn from Joseph’s body. They conspire to kill him. He is held captive and then sold into slavery. His brothers bring Joseph’s robe back to their father Jacob, convincing him that Joseph has been killed by wild animals. And Joseph is inconsolable; he has lost his beloved son.

This was especially true for someone else in Scripture, someone else who was, for no reason, beaten, stripped, held captive, and killed. Someone else whose Father’s heart was broken at the loss of his Son. And the same is often true for us. Sometimes, even as our Father’s children, evil finds us, even in the midst of doing good.

But this was not the end of the story for Joseph. At the end of the chapter, we read that he is taken down into Egypt. There is much in store for Joseph. One day, he will rise in stature. One day, he will bless others, even his brothers who hated him. One day, his father will find what was lost. And because of Joseph, the descendents of the sons of Jacob will become the 12 tribes of Israel. And from those tribes will come the salvation of humanity.

We all experience disadvantage, and every once in a while we catch a vision of God’s reality for us, and then we despair when we find that reality is not the dream that we had imagined it might be. But we must take heart and keep hope, for God is constantly in the business of redemption, constantly bringing blessing out of curses, goodness out of evil, new out of old, life out of death. We see that truth in our own lives, we see it in the life of Joseph, we see it in the history of Israel, and we see it in the life of Jesus the Messiah, our Lord.