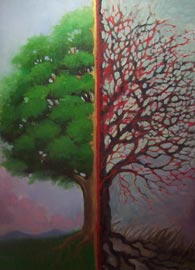 The Wisdom From Below

The first of the three negative examples addresses katalalia, “slander” — the word is literally “speak against” or “speak ill of,” and is an obvious continuation of the letter’s “tongue” theme. Like so many subjects in James, the prohibition against slander is well established in Jewish faith [Author’s Note 1] and must have been a problem in earliest Christian communities, given its regular presence in New Testament vice lists. [Author’s Note 2] As in the earlier “tongue” section, where cursing a fellow human is connected with cursing God (3:9), we are told here that the one who slanders is actually slandering God’s law (4:11).

This claim makes sense when one recalls the scriptural context of the “love your neighbor as yourself” command. Just two verses earlier the law insists, “You shall not go around as a slanderer among your people” (Leviticus 19:16). The believer who knowingly slanders another is breaking this command, and can therefore be said to be putting herself above the law. Such a person is clearly not a doer of the law (4:11; compare 1:22–25). Rabbi Jesus emphasized this point in his teaching: Since only God is able to save and destroy, Christians must avoid judging others at all costs. [Author’s Note 3] If only Christians today were known by this trait! Alas, judgmentalism is one of the primary charges leveled against believers today, and I fear the charge is valid.

The next negative example is also of one who “says” something (4:13–17): This person is planning a future business trip wherein he hopes to gain financially. Sounds innocent enough, doesn’t it? But James draws attention to this as an example of the arrogant wisdom from below.

These people might be called “practical atheists”; they may believe in God and say they love their neighbors as themselves, but they operate their lives according to a secular logic that proceeds with disregard for God’s rule. Like the rich fool in Luke 12:16–20, so also these people work to make money but fail to remember that they do not hold the keys to their own life and death. The line “you are a mist that appears for a little time and then vanishes” is a clear allusion to the Old Testament wisdom tradition that human life is transitory and the future is in God’s hands. [Author’s Note 4] Since “the fear of the Lord is the beginning of wisdom” [Author’s Note 5], they ought to say “If the Lord wills, we shall live and do this or that” (James 4:15).

As is often the case, James ends this mini-section with a memorable aphorism: “Anyone, then, who knows the right thing to do and fails to do it, commits sin” (4:17). Plain and simple folks: Sins of omission are no less serious than sins of commission. God will not judge us simply according to what we have done, but also for what we have left undone.

James has left for last what he considers to be the prime example: the arrogant rich who live in disregard of God and neighbor (5:1–6). His previous comments against the rich (1:9–11; 2:2–7; 4:1–2) are brought to a zenith here. The tone recalls Old Testament prophetic oracles against the rich, particularly those of Isaiah (e.g., Isaiah 3:11–4:1) and Amos (e.g., Amos 4:1–3). It is similar to the call to repentance at 4:7–10, but there it was a call to acknowledge guilt as a preemption of God’s judgment. Here it is directed to the rich person who has not repented: hence, these miseries are not just threatened, they are “coming upon you” (James 5:1).

Last week I noted Luke Timothy Johnson’s insight that the logic of envy involves over-associating being with having. Accordingly, judgment is depicted as coming upon the things the rich person has (riches, clothing, gold, silver), and these things “will be evidence against you and will eat your flesh like fire” (5:3). We might also note the past tense verbs in 5:1–6, indicating that somehow this destruction has already taken place. Once again we see that perception is key: Where the rich see nice clothes and fat wallets, James sees things that are impermanent and subject to destruction. Or perhaps he means it more literally? Are the clothes moth-eaten because they are hoarded and unused? Are the coins rusted because they are stowed away in a jar instead of being used to help others?

Regardless, by keeping their wealth for themselves they have simply “laid up treasure for the last days” (5:3) and fattened themselves as preparation for the “day of slaughter” (5:5). “Where your treasure is,” says Jesus, “there your heart will be also” (Matthew 6:19); the heart of the wealthy is so focused on acquisition that they can no longer hear the cry of those who enable their wealth, namely, “the laborers” who mow their fields, tend their gardens, do their nails, sew their clothing, and assemble their electronic devices. But God hears them; indeed, this God is the “Lord of Hosts,” an Old Testament term that describes God as a warrior coming with armies of angels to conquer and avenge. [Author’s Note 6]

The Old Testament is replete with examples of God condemning mistreatment of laborers:

There is a terrible irony at work here: Those who sought to secure themselves via wealth have, in doing so, put themselves in grave danger; they thought they could serve both God and money, but these are two incompatible gods with different allegiances required of their followers (Matthew 6:19–24). The former requires an outpouring of service to others, most especially “the widow and the orphan,” but the latter views the vulnerable as expendable tools poured out on the road to wealth (see Psalm 37:14; Amos 5:12).

Of course, the poor they “condemn and murder” are in fact the “righteous ones” (James 5:6) who are rich in faith and heirs of the kingdom” (2:5). By mistreating the poor, by embracing inequity as an unavoidable consequence of “the way things are,” they have demonstrated their allegiance to the wisdom of the world and have thus become God’s enemy.

The Wisdom from Above

What is the alternative for Christian brothers and sisters? Instead of the worldly “virtues” of envy, boastfulness and acquisition, James commends the virtue of “patience” (5:7–11) — that is, long-suffering endurance in the face of trial and opposition until “the coming of the Lord” when the humble will be exalted and the rich brought low. They should not “grumble” like the ancient Israelites who failed their desert trials (Exodus 2:23–24; 6:5, 9), for it is the wisdom of the world that promotes strife. Instead they must strengthen their hearts and remain disciplined peacekeepers, knowing that the Judge is coming soon. “We call those blessed who showed endurance” (James 5:11) is a clear echo of 1:12, “Blessed is anyone who endures temptation,” for the one who holds out in trusting faith will receive the compassion and mercy of God.

The “above all” indicates that James is now moving to the final key points of his letter. After so many negative examples of speech-acts, James now concludes his letter by listing off forms of righteous speech. The first (5:12) advocates simple, unadorned speech, and is a near direct quote of Jesus’ own teaching on the matter (Matthew 5:34–37). Those who bridle their tongues are known by their plain, honest speech that is direct and truthful, words offered without intent for persuasion or manipulation. “Anything else,” Jesus says, “comes from the evil one” (Matthew 5:37).

Those who are suffering (James 5:13) should talk to God about it, and should not conclude that they are being tempted by God (1:13). Neither should they turn to retaliation, acquisitiveness, slander, or grumbling (4:1–3, 11–12; 5:9). Those who are cheerful should likewise express this to God by singing songs of praise. In doing so they acknowledge God as the generous giver (1:5) of every good and perfect gift (1:17). Those who are sick should “summon” the elders of the church to receive prayer and anointing (5:14).

Note here that James posits a difference between “suffering” and “sickness”—the former is a kind of persecution that, when endured, brings growth in faith (1:2–4); the latter is the sort of suffering God wants to alleviate. The word “summon” connotes an official command, and reflects the “exalted” state of the “lowly” sick person (1:9); such a person is authorized to call for help and is thereby “raised up” in the community.

As Jesus does in the gospels, so also here James connects sickness and sin (compare Mark 2:1–12). Follow his logic: sin is a sickness that can be healed; therefore, “confess your sins to one another and pray for one another that you may be healed” (James 5:16). Of course, mutual confession results in healing because it humbles us before others — and, as we’ve clearly seen, humility is James’ prescription for what ails us. For those who doubt the power of righteous prayer, James turns to the example of Elijah (5:17–18), who was a suffering human being just like us, yet his prayer was able to stop the rain for three and a half years.

But let’s be careful not to lose our way with an over-used Christian word like “righteous”! The righteous people James has in mind are quick to hear, slow to speak, and slow to anger (1:19–20); they trust God and act obediently (2:23); they are peacemakers (3:18); and they are found among the righteous poor (5:6). Do you know such a person? Find her, confess your sins to her, and ask her to pray to God on your behalf.

The letter closing (5:19–20) sets forth a final imperative call in the form of a concluding statement that summarizes how James conceives of the Christian life. For James, faith is most certainly not an individual, “spiritual,” and therefore internal and “private” matter. No, Christian faith is a way of walking through one’s life that is inherently and necessarily a communal reality. Sin, it turns out, is “wandering from the truth” as we walk through the trials of life (1:2), and restoration involves being brought back to the path that leads to salvation. Such a “wanderer” must be brought back by a righteous brother or sister who has not lost her way, one who has faithfully navigated her way through the test and has stayed faithful on the way. Once again, it seems that James has the Old Testament book of Proverbs in mind:

Whoever winks the eye causes trouble, but the one who rebukes boldly makes peace.The mouth of the righteous is a fountain of life, but the mouth of the wicked conceals violence. Hatred stirs up strife, but love covers all offenses (Proverbs 10:10–12).

James imagines a wise Christian community dedicated to a performance of the faith (James 2:1–26); one in which mercy is considered more powerful than judgment (2:13); one that is pure, peaceable, gentle, open to reason, full of mercy and good fruits, without uncertainty or insincerity (3:17); one that considers humility to be the chief virtue, and arrogance and envy the chief vices (4:6–10); one where grumbling, slander, and judging are not tolerated (4:11–17; 5:9); one that is characterized by pure speech, prayer and praise, intercession, and mutual confession (5:12); one that practices mutual correction for the purpose of keeping one another on the path of salvation (5:19).

In such a community, sin has no power; it is literally “covered over” with love. As you think about your own faith and that of your Christian community, to what extent does it correspond to James’ description? What needs to change? Who is wise and understanding among you?

<<Previous Lectio   Back to James   Next Lectio>>