Selections From the Prophets Week 3 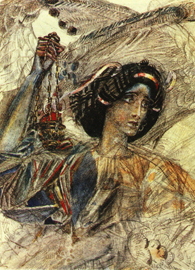 Imagine walking through a desert landscape, thinking about your day, what you will be having for dinner, or what you will be doing with friends and family the next week, when the following events occur:

As whirlwinds in the Negeb sweep on,
it comes from the desert,
from a terrible land.
A stern vision is told to me;
the betrayer betrays,
and the destroyer destroys.
Go up, O Elam,
lay siege, O Media;
all the sighing she has caused
I bring to an end.
Therefore my loins are filled with anguish;
pangs have seized me,
like the pangs of a woman in labor;
I am bowed down so that I cannot hear,
I am dismayed so that I cannot see.
My mind reels, horror has appalled me;
the twilight I longed for
has been turned for me into trembling.
They prepare the table,
they spread the rugs,
they eat, they drink.
Rise up, commanders,
oil the shield!
For thus the Lord said to me:
“Go, post a lookout,
let him announce what he sees.
When he sees riders, horsemen in pairs,
riders on donkeys, riders on camels,
let him listen diligently,
very diligently.”
Then the watcher called out:
“Upon a watchtower I stand, O Lord,
continually by day,
and at my post I am stationed
throughout the night.
Look, there they come, riders,
horsemen in pairs!”
Then he responded,
“Fallen, fallen is Babylon;
and all the images of her gods
lie shattered on the ground.”
O my threshed and winnowed one,
what I have heard from the Lord of hosts,
the God of Israel, I announce to you. (Isaiah 21:1–10)

What was normal and predicable has become starkly different and strange. Something grabs hold of you seemingly unannounced and propels your life into another reality that you didn’t expect but no longer can deny.

As strange and otherworldly as both the language and the volatile nature of this event sound, it is also familiar in many of the stories we encounter in popular culture:

The costumes are different, but the story is very familiar.

Popular culture has long been fascinated with the origin stories of its heroes — whether it is grand myths of ancient Greece with very human heroes such as Odysseus who face supernatural challenges, or the modern comic-book heroes called out of their previous lives into the mantled identities of Superman, Spider-Man, Batman, and the like. Origins are vital to any tale and become the basis by which we know who we are. Knowing where we come from helps orient us as to where we will go and to whom we will ultimately bind our lives.

As we continue to explore the prophetic tradition of the Old Testament, we are similarly reminded that origins matter. Unlike the fantasy realm of comic books, prophets neither hide their origin nor fear being discovered. There is no costume, no cape, no mask to separate them from the people. Yet, like many of our tales of heroes both real and imagined, prophets come into their lives through a sense of calling.

One of the distinctive aspects of the prophetic call is that, when the prophets employ the first-person singular “I” or “me,” they are putting themselves outside of and at odds with the fixed order of religious authority. As we see in Amos 7–9, Isaiah 6, Jeremiah 1, Ezekiel 1–3, Zechariah 1:7, and other verses, prophets are personally called out to serve the Lord, and, in separating themselves out from the establishment of religious tradition, they are left with little to no conventional resources by which to justify their statements, let alone their own sense of call [see Author’s Note 1]. Their reliance on the power and presence of the living God becomes that much more potent. Yet what we see in the prophetic call is that the Lord God does not merely commission those he calls; he literally inhabits and animates them.

“But suppose they do not believe me or listen to me, but say, ‘The Lord did not appear to you.’”

One of the most remarkable aspects of the prophetic call is that those who are called are free to question and turn away from it. As seen in Moses’ call in Exodus 3–4, Moses offers his arguments with God for choosing someone like him. What is important to note is that God neither disagrees nor denounces Moses’ assessment of his lack of suitability; rather, as seen in Exodus 4:12, God promises not merely that he will give a script but that “I will be with your mouth.”

The lives of prophets are also distinct from the lives of priests in the Old Testament, in that there is no previous faith, family heritage, or lifelong demonstration of piety that is a prerequisite for this calling. While Moses resided for years in the household of Pharaoh, it is the revelation that he is not of royal lineage that begins his journey as a prophet. Central to the prophets’ call is to highlight that it is not skill or pedigree that qualifies them for the call, but the call itself and the God who issues it.

The prophets received their call through God’s direct and very personal claim on their lives. In this, prophets were simultaneously separated from their past and empowered by it for a completely embodied life of service to the message of God to a particular people. This is clear in Amos, where he reminds the people,

I am a herdsman, and a dresser of sycamore trees, and the LORD took me from following the flock, and the LORD said to me, “Go, prophesy to my people Israel” (Amos 7:14).

This was more than a new profession: it was a totally new way of life, even at the sociological level, to the extent that a call meant relinquishing normal social life and all the social and economic securities which this offered, and changing over instead to a condition where a man had nothing to depend upon, or, as we may put it, to a condition of dependence upon Yahweh and upon that security alone. [see Author’s Note 2]

The call of the prophet also summons the prophet away from seemingly natural tendencies in order to live and work more fully in the world for the sake of God’s calling. In the case of Jeremiah, he is called from being a spiritual pacifist to calling down harsh threats to get people to change. In the case of Ezekiel, we see the opposite shift, where he moves from being a person prone to severe words and actions to being a prophetic presence of comfort and calm. 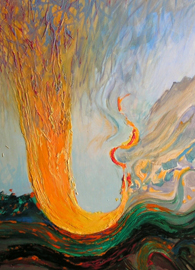 Enlarge“Therefore my loins are filled with anguish; pangs have seized me, like the pangs of a woman in labor ….”

The prophets look upon the world with the eyes of God and do not look through the world as though this existence were merely a transitory weigh station prior to an afterlife. No, the prophetic call refocuses the vision of the individual to see, taste, hear, and touch the particular and very real context of day-to-day life. The eyes of the prophet see the stones of the road, the faces of the weeping, the smell of excrement, and the twinned choirs of laughter and sorrow intermingled yet boldly evident to the awakened heart.

Over and over, God will ask the prophet a sublimely simple question: “What do you see?” The answer is forged in plain speak — a bowl of fruit, a plumb line, an olive tree. It bears no theological gloss and is completely unvarnished from distracting rhetoric. As we heard (and felt) through our passage from Isaiah 21, the fully embodied call upon the prophet takes over all that they are: he is drawn into a whirlwind, he sees clearly the torment of the people, he hears the cries of the downtrodden — and this vision of body, mind, and soul leaves him in solidarity with those who are on the threshing floor.

As we have seen, heard, and felt, these feelings of call are found not only in the grand epics of ancient times and the comic book films of our multiplexes, but also in political exiles, common sheep herders, and former sons of Pharaohs.

And perhaps, yes perhaps, they are found in someone like you.

The prophetic call in fact gave rise to a new literary category, the account of a call. In Israel the connection between a person’s experiences in his religious and cultic life and the way in which he expressed himself by means of the spoken or the written word was such a direct and living one that any innovation of importance at once made itself apparent in the realm of form: an old form was modified, or a new one was brought into being. Here I mean the innovation by which the accounts of prophetic calls were given in the first person singular…, [T]he “I” the prophets speak of is expressly exclusive. The men who speak to us in these accounts were men who had been expressly called upon to abandon the fixed orders of religion which the majority of the people still considered valid – a tremendous step for a man in the ancient east to take  …”