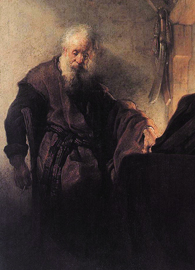 When one begins reading Romans, one notices stylistic idiosyncrasies right away. For instance, Paul likes long sentences; really long sentences. (Believe it or not, they tend to be longer than the sentences by this author!) Paul also breaks from conventional epistle or letter protocols in the opening verses of Romans (as we noted last week).

The natural flow of the letter would be to have 1:1 move right into 1:7; but Paul includes 1:2–6, all of which grammatically constitutes one relative clause within the sentence.

Why the break in verses 2–6, and what is its significance here? The running prose of 1:2–6 does two things:

What Paul initially signifies through this short aside will be indicative of the epistle as a whole. The apostle is attempting to tease out how this faith in Jesus Christ can be at the same time in continuity with what has gone before in the history of Israel and reconfigured to include all the nations of the world.

This tension is a significant one, for it redefines what it means to be a Jew and what it means to be a Gentile, in one fell swoop. In the case of Jews, Paul sees the gospel as not simply commencing with Jesus but being culminated, fulfilled, in the Christ-event. All that has gone before is integrally tied to what is now being proclaimed and taught by the apostles. In Paul’s estimation, a faithful Jew would count Jesus as Lord. Such a belief, though, would (and did) bring Paul into deep conflict with the Jewish leaders of the day.

As for Gentiles, Paul sees Gentiles as heirs of the promise, too. The power of salvation is for everyone who has faith — to Jews first and (just as importantly) to Gentiles as well (1:16). This inclusion of the Gentiles is controversial not only from the Jews’ perspective but also from the Gentiles’: Paul believes that all nations and all peoples are bound now to this God who for some time was thought to be the exclusive deity of Israel.

If this gospel is for everybody, then, the reasoning goes, everybody needs it, and Paul proceeds to show how, in fact, “ungodliness” and “wickedness” are not just Jewish problems; they are human problems.

What Paul does here is engage in a species of what could be termed “natural theology,” in the sense in which he states that all have some “plain” knowledge of God that makes “ungodliness” and “wickedness” inexcusable (1:18–20).

Some people have been moved to say that this bit of universal knowledge is intimately tied to a moral code or compass. The 18th-century philosopher Immanuel Kant comes to mind here. He said in his second Critique that the two things that fill us with the most awe and wonder are the starry heavens above and the moral law within. Whatever may be the case, Paul’s point here is not to offer an abstract set of principles by which to prove God’s existence.

In the depiction of this ungodly and wicked situation, Paul proceeds to talk about its symptoms, and they are sundry. In 1:29–32, Paul gives a catalogue of these vices and habits, ones that we see readily on display in others and in ourselves. Often these are overlooked because of what precedes them in the text — namely, some of the most outright biblical indications regarding homosexual practice.

Given the contemporary climate, Paul’s words here are disputed, negotiated, and cited in the culture wars related to homosexuality. It is true that the Bible never celebrates homosexual practice. Quite the contrary, it is viewed as something other than what God desires. However, it would be unwise to pick and choose parts of this passage in order to win a particular debate. Paul’s point here is not to offer an account of human sexuality [see Author’s Note 1].

The Cruciality of Attentive Worship

So what is Paul’s point? The gist of the argument is that all human beings have some sense of God available to them, and this sense is denied through a lack of attentive worship. They know God (whatever shape this may take — moral code, idea of God, or something else) and yet they fail to honor God and to be thankful to God. Humanity’s basic problem is one related to faulty worship. Humanity worships other things in God’s place, and the consequences of faulty worship are dire.

Judgment Shrouded in Mercy and Grace

But God’s judgment is not a hopeless judgment, for, as God shows time and time again within the biblical witness, God’s judgment is shrouded in God’s mercy and grace. That is why, as difficult as our situation can be in this life, it is all the more glorious when God breaks in and offers us the gospel. This recognition is haunting by the way that Paul begins Chapter 2: “Therefore you have no excuse, whoever you are, when you judge others; for in passing judgment on another you condemn yourself, because you, the judge, are doing the very same things.”

Going back to the homosexuality debates, it is fascinating that the beginning of Chapter 2 is often not included when parts of Chapter 1 are cited in these wars. Does God have an ultimate desire for us as sexual beings? Yes, God created us as such. Are matters of sexuality important in the body of Christ? Yes, of course, although we ought to ask the question why we are so prone to emphasize homosexual practices to the neglect of, say, covetousness, strife, haughtiness, boastfulness, and the other practices mentioned in these verses.

Will we have to give an account of what we worship? This is a major point of this passage: We are ultimately responsible for what/whom we worship, and only God knows the degree to which we are faithful in this task. We are all at different stages in this process, and, whereas self-monitoring, accountability, speaking the truth in love, and other practices are part and parcel to what it means to be in Christian fellowship, judgment is not one of them. Judgment is God’s alone to enact.

And God will judge accordingly; God will judge both the Jew and the Greek — that is to say, all peoples — and do so with no partiality (2:11). Only God knows how to do this in a fair and equitable way. Jews have the law, whereas Gentiles don’t; this will not hamper God’s judgment in any way. All will be judged appropriately in a way that you and I cannot fully grasp, because we are not God, and hallelujah for that.

It may be hard to know what is going on in Chapter 2, in that such broad strokes about the human condition were painted in Chapter 1, and then Paul moves to talk about how we treat one another, addressing the specific topic of hypocrisy. It may be the case that Paul has the Jewish-Gentile interface in mind once again regarding specifics related to the Roman communities.

The larger theological point, however, is that God’s judgment relativizes any subsequent judgment on our part. In fact, it does not just relativize our judgment, but makes it null and void, since anybody who judges will also be judged by God. What God will do on that final day of glory ought to determine how we live and treat one another today.

There is no way to put ourselves in the place of Paul’s original hearers, to see the looks on their faces as Paul pretty much goes back to “square one” in the opening verses of this letter. Paul is taking the Jews to task (“You aren’t any more special than others just because you have a history with God”) as well as all other peoples (“You’re not off the hook; you too are being held accountable”).

On the one hand, it is scary to think that we are all going to have to give an account for the kind of worship we render; we will all have to come to terms for what and for whom we live. And yet the notion is quite freeing as well. God has no favorites; certain people don’t have advantages with God just because of who their parents are or where they were raised, went to school, or attended church. The gospel is for all because all equally need it, and that recognition says something about the glory and beauty of the God we serve.

Given the space constraints of this medium, it would be impossible for me to offer a significantly suitable discussion of this topic that is dividing the church today from within. But two points are in order.