The Blind Leading the Blind 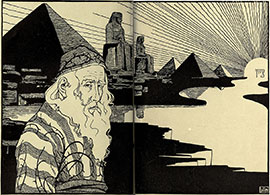 If you have ever found yourself in a difficult situation, you know that diagnosing how you got into the mess is often the first step toward making things better. In this week’s section, the people of Judah are in a mess and things look like they might get worse. They need to develop a plan. They ask Jeremiah to approach the LORD. The LORD’s prescription to the people’s plight requires them to accept the diagnosis that their situation is the direct result of God’s judgment on their idolatry. The thing about idolatry, however, is that it often induces a case of spiritual blindness so that you can’t properly diagnose your own illness. This is exactly where the people of Judah find themselves.

In the aftermath of Ishmael’s murder of Gedaliah, Johanan and his men set out in pursuit of Ishmael. It appears that Ishmael has taken many captives with him. When the captives see Johanan coming to rescue them, they run away from Ishmael. Ishmael and some of his men, however, escape back to the Ammonites (Jeremiah 41:11−18).

Here is the situation as chapter 42 begins. Gedaliah, the governor appointed by the Babylonians, is murdered. The man who murdered him has escaped. The leaders of the remaining Judeans assume that the Babylonians will want to hold someone responsible for killing their appointed governor. They want to flee before it is too late. They plan to go to Egypt in the hopes of finding safety there. This seems to be the most prudent course of action.

Before setting out for Egypt, the leaders of the Judeans ask Jeremiah to pray to the LORD about what they should do. Jeremiah agrees, but it becomes clear that the Judeans really just want divine confirmation of their plan to flee to Egypt (Jeremiah 42:1−6).

After 10 days, Jeremiah returns with an answer from the LORD. Although the Judeans vow to follow the word of the LORD in this matter, it is clear that they see only one conceivable course of action: flight to Egypt. If one has been reading Jeremiah carefully for the previous 41 chapters, it is not surprising that God delivers a different answer: stay in the land and God will keep you safe.

This situation provokes a series of conflicts over the cause of Judah’s demise. First, we read in Jeremiah 42:7−12 that the LORD takes responsibility for the disaster which has befallen Judah. This is not Nebuchadnezzar’s doing. Rather, it was the work of the LORD from beginning to end. Because the LORD directed these events, one might take heart from that same LORD’s commitment to “build” and “plant” the people in the land if they remain. The LORD promises to be with them and to save them if only they will remain. This answer to Jeremiah’s prayer on behalf of the Judeans, requires three crucial things from the Judeans. First, they must implicitly, at least, recognize that their situation is due to God’s judgment of them; Jeremiah has been correct from the outset. Second, they must believe that the God who has exercised judgment on them for their sin also loves them and always has. Finally, they must recognize that the God who loves them and judges them for their sin is also capable of saving them and securing their future.

Taking on all three of these convictions is demanding. One can perhaps sympathize with the Judean leaders who simply want to follow the politically prudent path of flight to Egypt. On top of this, however, the LORD promises further judgment and disaster if they go to Egypt (Jeremiah 42:13−22). Of course, if you do not believe that God is the cause of your current predicament, or that God loves you and wants to save you, or that God can accomplish this, then you probably are not too worried about this promise of disaster.

Despite, or perhaps because of, their vow to do whatever God tells Jeremiah, the leaders are compelled to claim that God did not speak to Jeremiah. Instead they argue that Jeremiah is simply conveying the views of Baruch. They seem to think that Baruch is merely a Babylonian sympathizer, though we are not given any real reason for this (Jeremiah 43:3). Instead of developing this strange claim further, we are simply told that the Judeans set off for Egypt, compelling Jeremiah and Baruch to go with them.

When they arrive in the Egyptian city of Tahpanhes, the word of the LORD comes to Jeremiah again. He is instructed to bury some stones in the pavement in front of Pharaoh’s palace. Jeremiah is then told to announce that Nebuchadnezzar will set up his throne right where these stones are. The Babylonians will come and wreak havoc on Egypt (Jeremiah 43:8−13). Again, it is not simply the announcement of this coming disaster which is significant. Rather, it is also the assertion that “the LORD of hosts, the God of Israel: I am going to send my servant King Nebuchadnezzar of Babylon” (Jeremiah 43:10). The LORD is directing these events. This is not simply the prediction that one of the world’s superpowers is going to attack and defeat another superpower. It is the bold, prophetic claim that the LORD is using Nebuchadnezzar to accomplish God’s will.

The Blindness of Idolatry

Quickly enough, as chapter 44 begins, the Judeans come under direct judgment. As the LORD sees things, these Judeans have heard the repeated prophetic message against idolatry; they have seen the devastation that has come on Judah because of her refusal to abandon idols and turn to the LORD. Nevertheless, in Egypt they are continuing to make offerings to other gods (Jeremiah 44:6).  Because of this, God promises that they will never return to Judah. They will die in Egypt, objects of horror and ridicule.

The response of the Judeans again manifests a basic conflict over how to understand the causes of Judah’s demise. In Jeremiah 44:15−19, we read the most explicit account of this conflict in the entire book. These men and women of Judah do not attribute their predicament to the LORD’s judgment. Rather, they think it is because they have stopped making offerings to “the queen of heaven” (Jeremiah 44:18). They attribute any prosperity they experienced in the past to their offerings to this queen of heaven (Jeremiah 44:17).

This is a straightforward conflict over how to account for, and respond to, the circumstances of the people of Judah. The troubling element here is that there is very little basis from which to change the views of the Judeans. Their account is plausible to them. Even from Jeremiah’s perspective, one can see why the Judeans’ account makes sense to them. Their idolatry has blinded them to such a degree that they cannot see in any other way; they cannot hear the voice of the LORD. Their idolatry has rendered them blind and deaf to such an extent that further idolatry seems to be the only reasonable response. Maybe they should increase their offerings to the queen of heaven? Even the reality of the fall of Jerusalem and all of the disasters that God has brought upon them cannot penetrate their darkness. They, of course, recognize that the fall of Jerusalem is a calamity, but they do not connect those events to the LORD and the LORD’s judgment. Instead, they attribute it to their failure to make offerings to the queen of heaven.

Jeremiah is in a situation in which success seems only a distant possibility. This is a further testimony to the fact that when a prophet has come on the scene, the situation is usually so far gone, the blindness and deafness so ingrained, that it becomes difficult for the audience to discern why repentance might be called for, much less what repentance might actually entail.

In response, Jeremiah reasserts that the Judeans’ current circumstances are exactly the result of the LORD remembering the idolatries of the people. Jeremiah is quite clear: “It is because you sinned against the LORD and did not obey the voice of the LORD or walk in his law and in his statutes and in his decrees, that this disaster has befallen you, as is still evident today” (Jeremiah 44:23).

Moreover, because the people have so adamantly rejected the word of the LORD and committed themselves to further offerings now that they are in Egypt, God is equally committed to “watching over them for harm and not for good” (Jeremiah 44:27). They will all die in Egypt.

Furthermore, God promises a sign: Pharaoh will be defeated by Nebuchadnezzar, the same king who defeated Zedekiah. Of course, this is not much of a sign. To those opposed to seeing the LORD at work in Nebuchadnezzar, it is equally likely that Nebuchadnezzar would attack Pharaoh for geopolitical reasons and defeat him because of his superior army and tactics.

The point here is not to deny God’s providential action and oversight of all things at all times. Rather, it seems worthwhile offering several cautions and qualifications here. First, it is almost always very difficult to discern divine causation in any specific event. Christians should be especially cautious about claiming that certain events are signs of God’s judgment of others. The friends of Job learn that difficult lesson. Secondly, when it can be discerned, God’s hand is usually discerned after the events, not before or in the midst of them. Hence, it is often hard for one’s attribution of divine causation to consistently guide behavior.

Christians, like the people of Judah, need to understand themselves and the world around them in relationship to God. Unless one does that well, it is very difficult to sustain faithful living. Christians can generally do that kind of discernment without having to attribute divine causation to specific events and without having to know God’s rationale for acting one way rather than another. We do need to be able to discern the shape of faithful living in the various contexts in which we find ourselves. However, to discern this, we do not need to know when and how God causes specific events.

The upshot of this is one of the truths that lies at the heart of Scripture: While God’s ways in history may be difficult to discern, especially in the short term, God’s desires for our lives are largely revealed to us in Scripture. Close attention to these desires is the best way to avoid unproductive confrontations with prophets such as Jeremiah.

This section concludes with God’s promises to Baruch in chapter 45. Like Jeremiah, Baruch has been faithful. He has suffered for his fidelity. Hence, even though God is going to “break down,” and “pluck up,” even though those Judeans in Egypt face disaster, God will spare Baruch’s life (Jeremiah 45:5).