Selections From the Prophets Week 2 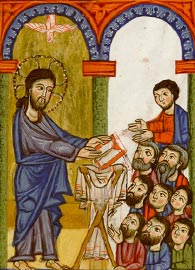 At the end of our introductory comments on the prophets, we noted that Jesus states in the Sermon on the Mount,

Marcion of Pontus — Wrongly Dividing God Into Old and New

An early church leader named Marcion of Pontus argued that we didn’t need to listen to the Old Testament. While Marcion was one of the first to delineate a list of texts useful for Christian worship and growth that would develop into our biblical canon, he also felt that the texts found in the Hebrew Bible not only were subordinate to the texts we call the New Testament, but ultimately pointed to a God who was wrathful, vengeful, and violent in ways that are at odds with the peacemaking, grace, and mercy of Jesus’ ministry. To this end, Marcionism, as it came to be known, was a teaching seeking to divide and remove the Hebrew Scriptures from those of the New Testament by seeing the God of the Old Testament as utterly incompatible with the God of the New Testament.

In the early ecumenical councils of the Church, bishops and leaders of the faith denounced Marcionism as a heresy and underscored the unity of God [see Author’s Note 1], asserting that the God who called Abraham, flooded the earth under Noah’s ark, and spoke to David in the midst of his sin was the same God who came to the world incarnate as Jesus.

Yet while Marcionism was actively denounced as a heresy centuries ago, there are still echoes of this view whenever Christians underscore the priority of the works of Jesus proclaimed in the New Testament over and against the works of God proclaimed in the Old Testament. Churches will often give just the New Testament or even a single gospel to new members. In this way, churches can subtly if not overtly reinforce Marcion’s claim and renew the heresy.

To say that Christians are “people of the book” is to say that we are people of the full canon of Scripture and that, without the prophetic witness of the Latter Prophets (see the first Lectio of this series), the New Testament would not exist, nor would we even be able to see and understand the Messiah who comes as Emmanuel, “God with us.”

The experience of reading prophetic literature evokes a sense of déjà vu, or “haven’t I heard that before?” The prophets, as we discussed last week, draw the listener ever closer to the heartbeat of the living God and remind the people of what God has said, continues to say, and will forever be calling us to.

The gospel writers evoke this reminder by continually citing the prophetic literature in the narrative of Jesus’ ministry, showing direct connections to the past promises of the prophets now coming to full fruition. For example, in these New Testament passages, we see numerous direct citations of the prophets [see Author’s Note 2]:

These represent only a small sampling of direct citations drawn out of the prophetic witness and placed into the real time of Jesus’ earthly ministry and the life of the early church.

Jesus as the Prophetic Word Made Flesh

Fulfilling the Prophets to Overflowing: Jesus Reads and Fulfills the Prophecy of Isaiah

Nowhere is this more clearly demonstrated than in the fourth chapter of Luke’s gospel. Here Jesus is teaching in the synagogue in Nazareth, where he would have been raised — his “hometown” of sorts. As we hear in Luke 4:22, Jesus is referred to as “Joseph’s son” — known by his family relations more than by his own merit.

One of the central portions of a synagogue service was when an appointed person would stand and read from the Hebrew texts following the recitation of the Shema, Deuteronomy 6:4–5:

A teaching of the text would then follow this reading.

Here in Luke’s gospel, Jesus is the appointed reader and reads a passage from Isaiah 61. Often in the gospels we have references to only the first few verses of a passage, such as Jesus’ words from Psalm 22 while on the cross — “My God, my God, why have you forsaken me?” It is important to see these instances in a similar vein to hyperlinks on a website — sections of a larger truth claim that once clicked on opens to a fuller, deeper, and more profound reality. The short citation of Isaiah 61 in Luke 4 is an example of this.

Isaiah 61 has been titled “The Year of the Lord’s Favor” in some translations, since it points to the assurance of Isaiah that God has not forgotten his people, that there will be a specific, particular point in time and space when the God of Abraham, Isaac, and Jacob will bring reality into fullest focus through the coming of creation’s Messiah. The ministry of the Messiah will be framed and defined around these words (61:1–2):

The Spirit of the Lord GOD is upon me,
because the LORD has anointed me;
he has sent me to bring good news to the oppressed,
to bind up the broken-hearted,
to proclaim liberty to the captives,
and release to the prisoners;
to proclaim the year of the LORD’s favor,
and the day of vengeance of our God;
to comfort all who mourn ….

As Jesus read from Isaiah 61, all who would have been listening would surely have known the power of these words. Yet, as Jesus completes his reading of this passage, he makes the bold pronouncement that turns the focus away from the text and onto himself. As we hear in Luke 4:20–22:

And he rolled up the scroll, gave it back to the attendant, and sat down. The eyes of all in the synagogue were fixed on him. Then he began to say to them, “Today this scripture has been fulfilled in your hearing.” All spoke well of him and were amazed at the gracious words that came from his mouth. They said, “Is not this Joseph’s son?”

There are three points to reflect on from the Greek text in Luke’s gospel that remind us of Jesus’ role in fulfilling the prophetic call of the Old Testament:

The challenge for us of these words of grace is to hear them anew just as the listeners did when Jesus first spoke them into being. That collapsing of time and space, of doubt and faith, of truest words and truest grace, is our legacy right here, right now. Like those in that congregation in Nazareth so many years ago, we have also heard these words of grace uttered by Emmanuel. Today — not yesterday in some historic past nor tomorrow in a distant galaxy far, far away — God is with us, and we who are the Body of Christ “bear witness” to the words of grace made manifest on Calvary. This is “the acceptable year of the Lord” — this year, today. This is the year that is founded and forged on good news to the poor and liberty to the captive.

We who have heard this scripture fulfilled are also “martyred” by it. Our lives are not to be the same any more — our lives don’t even exist in ways that this world can possibly comprehend, because this in-breaking of the Word of Grace is the overflowing of all reasonable attempts to make meaning. We have been grafted to grace by Jesus, as a branch is grafted to the vine, and so all our life flows from that source — not our occupations, not our status, not our pride or any accomplishments of our own making. It is understandable why this message is such good news to the poor and the captive.

Vincent Van Gogh once elegantly wrote that Jesus is the truest and greatest artist, since Christ “is more of an artist than the artists; he works in the living spirit and the living flesh; he makes men [and women] instead of mere statues.” [see Author’s Note 3] This was the reality promised by the prophets that we will encounter in the weeks to come. The words of God that the prophets spoke and embodied were always pointing forward to the horizon of the Incarnation and beyond. God has always been straining and reaching for us to hear and embrace the coming promise found in Christ Jesus. When we hear and embrace the words of grace offered by God in Christ we begin to fulfill beyond our imagination that which has been promised and proclaimed by God and now is in flesh and dwelling among us.

Old Testament scholar Walter Brueggemann in his important book The Prophetic Imagination underscores the importance of seeing Jesus both in the line of the prophetic tradition yet at the same time offering something completely novel:

Jesus of Nazareth, a prophet, and more than a prophet I argue, practiced in most radical form the main elements of prophetic ministry and imagination. On the one hand, he practiced criticism of the deathly world around him. The dismantling was fully wrought in his crucifixion, in which he himself embodied the thing dismantled. On the other hand, he practiced the energizing of the new future given by God. This energizing was fully manifested in his resurrection, in which he embodied the new future given by God. [see Author’s Note 4]

For, as we see and hear in the ministry of Jesus, this “release” that Jesus proclaims is indeed a true and all-encompassing release — a release to all captives in the spirit of Jubilee found in Leviticus 25 and Deuteronomy 15 — the tradition where Israel would forgive those in debt, and those with plenty would “release” their holdings to those in need. Jesus’ words are truly comfort to the afflicted, but they are affliction to the comfortable as well.

The denunciation of Marcionism is implicit in the ‘according to the Scriptures’ of the Niceno-Constantinopolitan Creed of 381 (First Council of Constantinople), and in lists ‘of the divine scriptures’ such as that in chap. 2 of the Decretum Gelasianum, the early chapters of which some manuscripts and many (but by no means all) modern scholars associate with Pope Damasus and the (non-ecumenical) Council of Rome in 382.

One Comment to “Seeing Jesus through the Prophetic Literature: Luke 4”