Relating to the State: Romans 13 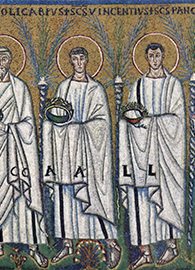 Christianity has had a mixed relationship with the state from its beginning. This ambiguity begins with Jesus: Although he was handed over by the crowds, Jesus ultimately was crucified as a threat to the well-being of the state. He was publicly tried, charged, and crucified. Early Christians continued to be considered threats to the state because, among other things, they would not engage in emperor worship.

The example of Polycarp is illustrative here: Polycarp (d. 156 A.D.) was an elderly bishop of the city of Smyrna who eventually was accused by the authorities for his refusal to acknowledge Caesar as Lord. For Polycarp, there was only one Lord/Emperor/President, and he was Jesus Christ.

Now what kind of threat is an old man who simply denies this sort of allegiance to Caesar? In every other respect, he was law-abiding and honorable. In fact, those who came to arrest Polycarp began to feel guilty because Polycarp was so gracious to them (through actions that Paul commends in Romans 12).

Yet Polycarp was taken to the arena and given one last chance to recant. His response: “For 86 years I have been his servant, and he has done me no wrong. How can I blaspheme my King who saved me?” He was therefore burned (and then stabbed) to death, just like many before and many after him. [see Author’s Note 1]

Polycarp didn’t seek to be a martyr; he was not looking for trouble. Rather, trouble came to him as he tried to live faithfully before God. In engaging the culture and attempting to change the world with the gospel of Christ, the church often finds a world that is hostile and antagonistic to the worship of God. As Polycarp found out, worshiping God is sometimes perceived as unpatriotic.

“Be Subject to the Governing Authorities”

With this state of affairs being the case for the early church, it is hard to understand where Paul is coming from when he begins Chapter 13 by saying, “Let every person be subject to the governing authorities; for there is no authority except from God, and those authorities that exist have been instituted by God.”

What?! Does that mean that Jesus and all the martyrs of the faith have been tortured and killed by authorities that have been placed in their positions by God? Is Paul so naïve as to say that God puts a Nero (the troublesome emperor at the time of Paul’s writing of Romans), a Caligula, a Hitler, and a Stalin in power? Does that mean that God approves of what these authorities do when they commit atrocious acts against humanity?

The previous examples highlight the apparent absurdity of Paul’s claims, but from another perspective they make quite a bit of sense. What Paul says in 13:1–7 is unique in Paul’s writings, and so one has to be careful here. Let’s say that the ruling power is not a despotic dictator but one of, by, and for the people. Let’s say that this ruling power generates its authority with the consent of a population.

This state of affairs would mean that the governing authorities preserve order, execute justice, and the like. If this were the case, then the ruling authorities could serve some important societal functions. The church and state could share some common concerns in terms of interests related to preserving order and executing justice. Paul’s point is that the church and state can be instruments God uses in particular ways for particular ends.

The problem, of course, is that Romans 13 can be used by those in power to maintain their power by suggesting that (1) the power they have is from God, and so (2) what they do is ultimately approved by God, since God gave them the power to begin with. As in so many cases, both individual and societal, the Bible can be manipulated in many different ways for people to argue for what they ultimately want. The same is true with regard to Romans 13 and political rulers.

An Ordered Way of Living

So what are we to make of what Paul is saying in Chapter 13? First, let us remember that immediately preceding this chapter (remember: chapter and verse numbers were added later, so the flow of Paul’s argument would be easier for Paul’s first audiences to see and hear than it is for us today) Paul is asking the Roman churches not to be vindictive, to allow God to establish justice, and to repay evil not with evil but with good.

Expressed otherwise, the Roman Christians are to live the Christian life fully on display before their enemies. This is an ordered way of living because it does not conform to unruly or rebellious tendencies that would only perpetuate and worsen situations full of tensions and conflicts. Christians can’t simply take the law into their own hands and establish their own forms of justice; the Christian call is not to be a political rebel.

In a few instances, Paul highlights that the ruling authorities are God’s servants to establish order; they avoid the danger of anarchy. As Paul states, “For rulers are not a terror to good conduct, but to bad. … Do what is good, and you will receive [the authority’s] approval; for it is God’s servant for your good” (13:3–4). The state functions to provide order and to promote the common good; when it does so, it fulfills its role within the economy of God’s creation.

Clearly, Paul is not granting the state a “blank check,” a license to do what it wills, but as long as it fulfills its mandate to preserve and promote the public good, the state is worth respecting. Paul does not consider the alternative — when the state falls short of its duty — though, certainly given the examples from history, it often has done so.

Called to Be Good Citizens

Since Paul is not covering this issue from all the angles possible, it may be the case that Paul is addressing some insurrectionist or revolutionary tendencies he may have come to know about the Roman congregations. Given that Christianity was and is a different kind of community or fellowship with its own understanding of who its Lord is and what justice is, the temptation to implement this vision via whatever means possible has always existed.

Paul’s concern here, however, is not to give an account of Christian politics. Rather, he simply states that Christians should be good citizens before the state, fulfilling their duties and complying with the law of the land — whether it be paying taxes, respecting and showing honor for the authorities, or the like. In this regard, Christians are called to be nothing less than good citizens. In fact (and in contradistinction to certain outspoken atheists today), early Christian thinkers believed that Christians made the best kinds of citizens.

Who wouldn’t want all citizens of a given polis to live in harmony with one another, to rejoice with those who rejoice and weep with those who weep, and so forth? Christians have something at stake in preserving the common good, for it is their belief that things like goodness, truth, and justice stem from God.

But it is unimaginable that Paul would be thinking that respecting or honoring the authorities implies that one should deny Christ as Lord. As Christians, we are called not to live and die for the state, but to live and die unto God, the one who has promised to raise us with the same Spirit and power that raised Jesus. As Christians, we are called to worship not the state but the one true God who is Lord over all. Anyone who reads Romans 13 as a permission to collapse God and the state not only has misread Paul but has totally misunderstood what the gospel calls for.

The Primacy of Love

Just as it is dangerous to say that one person exclusively speaks for God or that one person merits the devotion that is due God, so is it a mistake to do so with our collective entities. The Christian account of how to live is not simply obeying the Ten Commandments and avoiding harm or evil; rather, as Paul states further in Chapter 13, love is the fulfillment of the law: All the commandments are summed up in the great love commandments. Paul highlights loving one’s neighbor as oneself, but we would do well to remember that this is only one part of the love commandments; we are also commanded to love God with all our heart, soul, mind, and strength.

And for Christians, the love of God is fully on display in one person, the man from Nazareth called Jesus. That Jesus was tried by the authorities when they themselves weren’t sure of the legitimacy of the charges shows that the state, like individual people, gets it wrong sometimes. The Jews didn’t get it, Pontius Pilate (and so the political authorities) didn’t get it, and, pre-crucifixion, Peter didn’t get it either.

When anybody or any collection of people stands against Christ, then Christians cannot follow along; in their estimation, they find this posture by a person or a state not simply to be an act of religious intolerance but an act of aggression against the new order called the Kingdom of God. Unlike Pilate, Christians know what/who truth is, and part of their call is to live according to that truth, even if it means “inviting trouble.”

Was the elderly Polycarp, a man who was generous and kind even to his accusers, really a threat to the state? Interestingly enough, because of Polycarp’s allegiance to Christ, the state certainly thought so. May we heed Paul’s admonition to “put on the Lord Jesus Christ, and make no provision for the flesh, to gratify its desires” (13:14).

An accessible translation of the Martyrdom of Polycarp can be found in Michael W. Holmes, The Apostolic Fathers in English, 3rd ed. (Grand Rapids: Baker Academic, 2006).