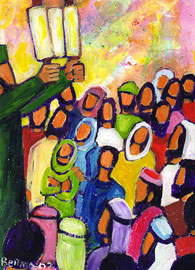 EnlargeThe Lectio, One Year In

A year ago the Center for Biblical and Theological Education at SPU began a venture in the production and distribution of Lectio: Guided Bible Reading. Many of you have traveled with us via this online program through Genesis/Exodus, Matthew, Romans, and Old Testament selections from Israel’s story (from a golden calf to a talking donkey) — a journey that has given witness to God’s promise from Isaiah 55:10–11:

For as the rain and the snow come down from heaven,
and do not return there until they have watered the earth,
making it bring forth and sprout,
giving seed to the sower and bread to the eater,
so shall my word be that goes out from my mouth;
it shall not return to me empty,
but it shall accomplish that which I purpose,
and succeed in the thing for which I sent it.

Our desire has been to serve as guides in your encounter with Scripture, helping you explore God’s Word, so that you might fully embrace a life of discipleship. Reports indicate that this has been a blessed endeavor; hundreds of you have recounted how God has used the Lectio for his purposes in your lives and the lives of your families, friends, and communities of faith. As I reflect on this first year of the Lectio, I am thankful for God’s faithfulness and for the blessings of sharing his Word with you, both over the past year and in the years to come.

Nehemiah 8 records a parallel venture for the Israelites in which they come together around God’s Word — though, as the story begins, they are an exiled people. Under Nehemiah’s leadership they have rebuilt the walls of Jerusalem to restore the dignity of their community. They have just settled into their towns when the text tells us,

[A]ll the people gathered together into the square before the Water Gate. They told the scribe Ezra to bring the book of the law of Moses, which the LORD had given to Israel (8:1).

In response, Ezra the scribe-priest brings the Law before the assembly and reads it aloud. In this amazing account,

He read from it facing the square before the Water Gate from early morning until midday, in the presence of the men and the women and those who could understand; and the ears of all the people were attentive to the book of the law (8:3, emphasis added).

When Ezra opens the Word, the people all stand up, and when he praises the LORD, they all lift their hands in response, shouting “Amen, Amen,” and then bow down, worshipping with their faces to the ground. Verse 9 also tells us that they wept as they listened, though there is no explanation given for the tears. I love the way the text describes Ezra’s and the other Levites’ role as they read from Torah:

They gave the sense, so that the people understood the reading (8:8b).

What a tremendous picture of God’s people — they come together longing for an opportunity to hear the Word of the LORD, listen attentively for hours, and worship in tears. Note the significant role of the priests: they make what was heard understandable. Some commentators suggest the language of Torah was being translated into the vernacular.

Regardless, the priests not only make the Scripture comprehensible to the everyday Israelite, but they proceed to instruct the people in response — a call to celebrate rather than to weep, a call to share the celebration with those in need (8:10). And the Israelites respond in obedience, eating choice food and drinking sweet drinks, and sending to those in need. Why?

[B]ecause they had understood the words that were declared to them (8:12).

Let’s pause and allow this picture to penetrate our hearts and minds. What does it look like for God’s people to understand Scripture? How can we today hear, understand, and respond to God’s Word? A few observations:

The Joy of the LORD

Then he said to them, “Go your way, eat the fat and drink sweet wine and send portions of them to those for whom nothing is prepared, for this day is holy to our LORD; and do not be grieved, for the joy of the LORD is your strength.”

What a statement — the joy of the LORD is our strength? We may have heard this multiple times, but what does it mean? Many have tried to parse these words and connect all kinds of dots. However, it remains a mystery how my strength and God’s joy can be intertwined. Nonetheless, one point is unmistakable: it is in the context of God’s Word being known and understood by his people that this mysterious truth is declared. The joy of the LORD is our strength, particularly when we as his people come in readiness to hear his Word, when we recognize the role of the scholar to help guide us, and when we respond faithfully to what we hear.

This same pattern of interaction with God’s Word (coming in readiness, recognizing the role of a scholar, and then responding in obedience) shifts slightly in the subsequent passage beginning in Verse 13:

On the second day the heads of ancestral houses of all the people, with the priests and the Levites, came together to the scribe Ezra in order to study the words of the law.

Interestingly, this second tier of interaction with the text indicates more comprehensive engagement on the part of those gathered:

And they found it written in the law, which the LORD had commanded by Moses, that the people of Israel should live in booths during the festival of the seventh month (8:14).

At this point, although the Israelites recognize the role of the scholar, they aren’t just listening and having others interpret Torah for them; rather, the heads of families along with the priests and Levites are themselves finding truths in God’s Word, commandments which they proceed to implement in the life of the community.

This responsiveness later results in reshaping an historic tradition, the Feast of Tabernacles (from Deuteronomy 13:16), so that it now focuses on a celebration of God’s law which was to be read every day throughout the feast.

At this point God’s people have moved from responsive listeners to active participants in the investigation of God’s Word and in the shaping of a faithful response. Those who came at first asking to have the Word read and explained to them, now become those who are making meaning of the text themselves as they explore it with the priests and Levites. This indicates a significant development in the life of the community, as God’s people begin to ponder and probe what the text means and how it is lived out.

Announcing a New Level of Engagement With the Lectio: Enabling Comments

I’m pleased to announce a second tier of engagement for our readers with the Lectio, one that will enable you to interact more directly with the text. Lectio now has a comments feature at the end of each reading that will allow you to ask questions, comment, and explore further the biblical text with the guide, and with other readers. We’ll review your comments, post them (as appropriate — the guidelines are posted below), and, if a response is called for, respond or ask others to respond.

As we get ready to begin the Autumn Quarter Lectio on Joshua/Judges with Professor Nijay Gupta next week, we pray this new feature will deepen your ability to process and make sense of the text so that you can respond faithfully to God’s Word. I encourage you to continue to come to the text with great readiness, recognizing the value of the scholar’s role, but also hungry to explore and interact yourself. And I give all praise to our gracious God for enabling this online resource to continue to serve, in essence, as a town square — a gathering place for us to come together around God’s Word and thus to experience the joy of the Lord as our strength.

May it be so. Blessings!

<<Previous Lectio   Back to Selections from Israel’s Story

14 Comments to “Reflections on Nehemiah 8”