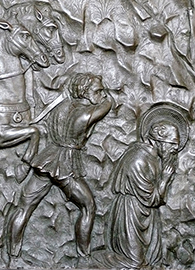 Paul concludes his Epistle to the Romans in more personal terms, addressing his audience in a more direct manner. Especially because of the exhortations that characterized much of the latter part of the letter, Paul may have wanted to make sure that his motives were understood. He expresses his confidence in the Roman churches, he truly believes that they are “full of goodness, filled with all knowledge, and able to instruct one another” (15:14).

Yet Paul has spoken in the way he has in order to fulfill his calling as a minister and an apostle of Christ. He tries to soften the blow by suggesting that his words aim only to remind his hearers, but it is clear: Paul has an obligation to God to do all that he can to make sure that the gospel is preached and that the fruit of his labors, the Gentile Christians, may be acceptable to God and sanctified by the Holy Spirit. He uses temple-oriented language to drive the point further: Paul considers his work as one of a priest who has presented his work and sacrifice, the Gentiles, before the altar of the Most High.

We get a small glimpse of the apostle Paul in these concluding reflections. He is careful to acknowledge that he doesn’t intend to step on anyone’s toes; he did not establish the church in Rome (legend has it that Peter did, although that claim cannot be verified historically), nor does he wish to build on or take over the foundations already in place; he is not about coming in and reaping the benefits from the hard work of others (as ministers have been prone to do ever since).

Paul’s Passion, Commitment, and Zeal to Proclaim the Gospel

And yet clearly he is a man profoundly committed to the gospel with a hard-to-believe zeal to reach the nations for Christ. He is willing to go to great lengths and distances to fulfill his apostleship; plenty of the world had not heard the gospel yet, and there was still much work to be done (including in Rome, but it appears that Paul wishes to make known very clearly his point in wishing to visit the Roman church: it wasn’t for a takeover of sorts).

Paul had little time to take side-trips or excursions. Such business occasioned for Paul plenty of opportunities to boast, but he is not interested in such self-promotion. He has passion, commitment, and zeal to proclaim the gospel, but he is in no way interested in being opportunistic, nor does he operate from a sense of entitlement.

And so Paul explains that this desire to minister has prevented him from coming to Rome sooner, but that, once he completes his trip to Jerusalem, he intends to go to Rome as a pit stop on his way to Spain. It is not clear why Spain is such a focus, except that it represented a border of the Roman Empire; it was viewed as the most western locale in the Mediterranean world, and so it would have important symbolic importance. There is no indication to us that he made it to Spain, and so that aspiration most likely did not get fulfilled. 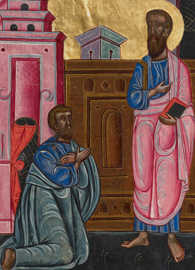 As for his desire to visit Jerusalem, it possibly stemmed from a number of reasons. The reason he cites here is so that he could relay an offering from the churches in Macedonia and Achaia to those in need in Jerusalem. Despite Rome’s being the heart of the Empire, Jerusalem still was the main base for early Christianity, and, given the many ministries at this base, it would be only natural for Christian congregations throughout the Empire to desire to support the home base. Another reason is that Jerusalem had been the source of some tension regarding Paul’s ministry.

As we may recall, Paul’s reputation often preceded him, both his past as a persecutor of Christians and his present as a bold proclaimer of a gospel that included both Jews and Gentiles. Therefore, this financial gift, one that Paul carried with him (a move that undoubtedly opened the possibility for unforeseen difficulties along dangerous paths and means), would be a sign of good measure (both its offering and its acceptance), a demonstration of charity that could potentially salve any misunderstandings or hard feelings that were harbored regarding his person and ministry.

Paul knew that going to Jerusalem was a dangerous undertaking, not only in terms of getting there but in terms of what would follow once he arrived. He urges the Romans to pray earnestly on his behalf (his single personal request he makes to his readers), because he anticipates (and rightfully so) that he will be persecuted by the Jews there. As a Jew who was taking such a radical stance on Jewish-Gentile relations, Paul was running a huge risk in returning to a place where he would inevitably face severe opposition from the Jewish establishment.

After the Conclusion, the Final Chapter

The concluding verse of Chapter 15 (“The God of peace be with all of you. Amen.”) sounds like a normal-enough way to finish the letter; it comes across as a compact, natural break. And yet Romans continues with a final chapter, one that is interesting on its own terms.

The first impression one has of this concluding chapter is that Paul knew quite a number of people (approximately 25 individuals, the highest number of personal greetings within the Pauline writings) from a community he had never visited. Undoubtedly, this familiarity would stem in part from the community in question: As the capital of the empire, Rome would have many people (at least for that time period) coming and going from the city.

Add to that reality the expulsions of Jews that had occurred around the time of Paul’s writing, and one has further factors leading to the possibility of Paul’s coming into contact with those who had been or were going to Rome.

The first person mentioned in Chapter 16 is a woman by the name of Phoebe: “I commend to you our sister Phoebe, a deacon of the church at Cenchreae, so that you may welcome her in the Lord as is fitting for the saints.” Most likely, she would have been the courier of this letter. Much has been made that she is called a “deacon” by Paul. Although it is not clear exactly what that title entailed, it no doubt implied some level of leadership in the church.

Mentioned also are Prisca (some translations “Priscilla”) and Aquila, who are most likely the couple well known to Paul as indicated in Acts 18. Much has been made also of Junia (16:7), who, most likely a woman, is counted among the apostles. Other than these names and their associations, little is known about the rest of the names (with the important exception of Timothy). Paul’s attentiveness in greeting his many acquaintances partly indicates the importance of community and relationships in the early church.

Paul finishes the epistle with a final piece of advice and a doxology. The advice calls for discernment and care in negotiating what has been taught to the Romans via the apostles in light of the threats of dissension and strife from outside sources and false teachers. The doxology is a beautiful passage of Scripture, highlighting once again the primacy of Christ, Christ’s fulfillment of the ancient prophecies, and the inclusion of the Gentiles as members of the covenant.

As we know from Acts, Paul did eventually make it to Rome, although the story is a sad one. We see in Acts what was mentioned in Romans, that Paul was intent to go to Jerusalem and afterward to visit Rome itself (Acts 19:21–22). Throughout his travels, Paul created controversy, among both Jews and Gentiles, and so he was made aware, through the Spirit in the form of testimonies, that imprisonment and persecutions awaited him on his way to Jerusalem (Acts 20:23); his conviction of such trials was so that he in turn notified the Ephesian elders that they would never see his face again, a point that grieved them tremendously (Acts 20:25, 38).

Despite repeated prophetic warnings both at Tyre (Acts 21:4) and at Caesarea (Acts 21:11), Paul was intent to go to Jerusalem; his responses to such warnings showed he was readying himself for the worst, “‘For I am ready not only to be bound but even to die in Jerusalem for the name of the Lord Jesus’” (Acts 21:13).

Paul finally arrived at Jerusalem (Acts 21:17) and reported all that had happened during his travels; however, Paul found out that rumors and lies had been spreading on his account, and. despite efforts to purify and present himself adequately before the people, he was captured by a crowd that began to abuse him with the aim of killing him (Acts 21:31).

Eventually, he gave his testimony, noting how he was once a persecutor of Christians, yet he was called by Jesus himself to minister to the Gentiles. His Roman citizenship helped give him some time while he was accused by the religious authorities before the governing powers. During a very dark hour, Luke notes, “the Lord stood near him and said, ‘Keep up your courage! For just as you have testified for me in Jerusalem, so you must bear witness also in Rome’” (Acts 23:11).

Escaping an assassination plot and being tried several times over a span of years, Paul finally arrived in Rome, although not in the way he had envisioned when he wrote the epistle. Because of his appeal to the Emperor, Paul had been taken to the imperial capital, but along the way had suffered shipwreck and all kinds of other hardships.

On arriving, he once again disputed with the Jews of the city; some of them believed and some did not. Acts ends with a theme that is prominent in the epistle, namely the rejection of the gospel by the Jews, and the evangelization of the Gentiles on the horizon. And that is all we hear of Paul at Rome in the New Testament. Legend has it that Paul was martyred in Rome shortly thereafter, most likely never reaching his goal of Spain, and leaving the church bereft of one of its greatest figures.

Because of its content and context within the apostle’s life, the Epistle to the Romans is sometimes considered Paul’s “last will and testament.” Although that characterization may be a stretch, it is fair to say that in Romans we see a glimpse of what Paul was preaching and teaching throughout the Mediterranean world. Its sheer power and imaginative reconstrual of what it means to be God’s people are an intellectual and spiritual marvel.