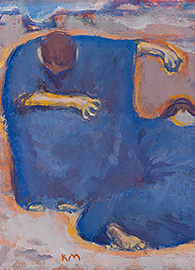 Psalms 79 and 80 are communal laments, whereas Psalm 81 is a glorious psalm of worship. All three psalms are connected to Asaph, about whom little is known except that he, or at least his family, is involved in priestly and liturgical ministry. [Author’s Note 1] It is instructive to see juxtaposed psalms in which the people lament abject defeat, followed by a psalm that contains not only praise but a divine admonition — which, if heeded, would mean that there would never again be cause for the prior laments.

Psalm 79 begins its lament by citing the worst offenses imaginable: nations have encroached on God’s inheritance (Israel), defiled God’s holy temple, and laid Jerusalem (the site of the temple and the city of David) in ruins (Psalm 79:1). This is almost certainly a reference to exile. This event is much more than a military defeat or a political reversal. Exile connotes losing, due to covenant disobedience, the signs and symbols of the presence and promise of God. It is almost literally a fate worse than death. The language used to describe devastation on this scale is lurid: Israelite bodies have become food for birds and beasts, while so much blood has been shed that burial of the fallen is not even possible (79:2–3). It is little wonder that Israel — God’s very own elect people — has been reduced to the subject of taunts and mockery (79:4).

In this dreadful state, Israel’s prayer is wrenching. The people are desperate to know how long God will stay angry (79:5). Obviously, the community realizes that their plight is their own doing, for they are under divine judgment. This does not stop them from asking God to turn the divine wrath on the perpetrators of their misery, for these vile folk have virtually devoured them (79:6–7). The irony could not be thicker. God’s people are suffering because those who are not God’s people have laid them waste, but this is because God’s people are under judgment for not acting as God’s people. Their sorry state is not happenstance or bad luck. Sin has landed them in this terrible situation.

In that light, it makes perfect sense for the people to plead for forgiveness. Acknowledging that their transgression has been longstanding, they ask God not to hold their ancestors’ iniquities against them (79:8). But they do not scapegoat; they also ask forgiveness for their own sins (79:9). The present community has been complicit with the past community. There is plenty of blame to go around.

There is little in the way of resolution in this psalm. Israel wants to know why God allows a condition to persist that allows the nations (same word as used for their attackers in verse 1) to ask mockingly, “Where is their God?” (79:10). Quite simply, Israel wants their defeat to be avenged (79:10). This includes being rescued by God (79:11). At the same time, Israel’s prayers are not completely selfish. It is true that they are being taunted (79:4).

But it is equally the case that their God is being taunted. That is what they wanted reversed, in fact, reversed seven times over (79:12). Then, they avow, their complaint and plaintive prayers will transform into ongoing thanksgiving. In that gloriously contemplated future, their primary identity will once again be as the sheep of God’s pasture. That future cannot come soon enough.

Psalm 80 begins as Psalm 79 concluded, with an image of Israel as God’s flock. It goes without saying that if Israel is the flock, then God is the Shepherd (80:1; see also Psalm 23). But in this instance the image of divine Shepherd is oddly combined with the image of a deity enthroned on the fantastic cherubim, from which God shines forth. The latter image evokes grandeur, power, and sovereignty. [Author’s Note 1]Appealing to this particular image — along with that of the divine Shepherd — the prayer is offered that a mighty God would save the people (80:2). It is likely that when this psalm stood alone, the people in mind were those of the Northern Kingdom, Israel, which is here identified as Ephraim, Benjamin, and Manasseh. But in its present context we should take the reference as including all Israel. It is completely natural to pray to this God who is a Shepherd and also enthroned on the cherubim: “Restore us, O God; let your face shine, so that we may be saved” (80:3).

Before praying the prayer again (80:7), the plea is to ask how long God will be angry at the people’s prayers (80:4). Somehow, being God’s people does not keep God from giving them tears to eat and drink, as though tears were sustenance (80:5). There’s no escaping the reality that because of God’s actions the people are a laughingstock among their neighbors (80:6). Nevertheless, the people return to the refrain: “Restore us, O God; let your face shine, so that we may be saved” (80:7). Nothing will keep them from petitioning their God for salvation. The refrain underscores their ultimate confidence.

After the second refrain, the psalm turns to a metaphoric recounting of God’s past graciousness with Israel. Israel was a vine that God took out of Egypt and planted in the land of promise (80:8). The image is of God as vintner who cleared the ground so that the vine could go deep into the soil and flourish (80:9). Incredibly, the growth was so spectacular that the vine gave shade to mountains and cedars (80:10). Equally astonishing, one end of the vine reached the sea (the Mediterranean) and the other end extended to the river (the Tigris-Euphrates) (80:11). [Author’s Note 3]

At the same time that God is given the credit for fostering growth of this magnitude, a haunting question is raised. How could this wonderful divine gardener break down the barriers that protect the vine so that passersby could easily pluck the fruit? Equally, how is it that the vineyard is now subject to the ravages of wild pigs and other critters (80:12–13)? Though this could be an allusion to any serious reversal, it seems more likely in this case that this is another reference to the ultimate reversal: the Exile (see Psalm 79:1).

Staying with the same image, God is asked once more to attend to the vine that God had indeed initially planted (80:14). The prayer is for God to deal harshly with those who have burned down the vine, again a presumable reference to the Exile. The next verse is curious. The collective prayer is for God to lend divine power to “the man of your right hand/the son of man whom you have made strong for Yourself” (80:17). This may be a personification of Israel, whom God needs to empower in Israel’s dire exilic straits. Because the terms — which refer primarily to ordinary mortals — indicate a single entity or person, they may also point to a future person who will have a decisive role in reversing Israel’s plight. This would be then a veiled allusion to a messianic figure. If that is the case, then from a Christian perspective the line would have Christological overtones. In any case, the community insists that after this empowerment it will never again turn its back on God. Once God restores the people’s life — in the Exile they are effectively dead! — they will call on God’s name (80:18).

What is the level of confidence that this prayer will be answered and that God will once again tend to this precious vine? The answer comes in the final refrain, which we have already observed twice before (80:3, 7): “Restore us, O Lord of hosts! Let your face shine, that we may be saved” (80:19). 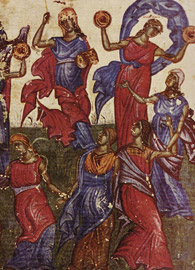 Psalm 81 begins with what amounts to a liturgical call to worship. Using every imaginable medium — singing, shouting, timbrels, lyres, harps, and trumpets — the people are called to praise God on a feast day, an unspecified religious holiday (81:1–3). Worship in this instance is basically a divine command (81:4). Everything the community is, everything the community does, flows from its worship posture.

As the “service” continues there is a recitation of God’s past efforts in behalf of the people — specifically, God’s rescuing Israel from Egyptian bondage (81:6–7). But the importance of the people’s praising God in this expression of worship does not push aside the negative dimension. After all, it was in the very context of experiencing God’s mighty acts in the Exodus events that Israel disobeyed the God who had been so very gracious. They complained about not having water as soon as they got into the wilderness, made idolatrous images, and committed other transgressions (81:7–9; see Exodus 17:7; 32–34; Numbers 20:13; 25). It was as though some other deity had saved them from Egypt’s brickyards (Psalm 81:10).

If it seems strange to bring to light the community’s failures in the context of festival and worship, we should perhaps think in terms of a public and general confession. That’s how the psalm functions when God laments that the elect people did not listen to the divine voice; in fact, the community flat out did not want God (81:11). Is this not the saddest of commentaries? What explanation could be offered for not listening to or wanting the very God who had brought about your rescue and redemption? There are simply no answers for such penetrating questions.

Since there is no rational explanation for such behavior, God concludes that plain stubbornness must be the cause. As painful as it has to be for a gracious and loving God, the deity does not stand in the way of the people’s adamant willfulness. If they want to be stubborn, God will in effect let them wallow in that trait (81:12). Virtually by definition, stubbornness is not amenable to persuasion, counterevidence, or invitation to change. Stubbornness is surely among the most perverse of moral or religious conditions. It defies common religious sense. How should God respond to such a stance?

The answer to that lies in God’s articulating a wistful desire that my people would listen and walk accordingly (81:13). Disobedient people get no respite. However, were the people to come around, God would immediately act to dispel their enemies (81:14). These enemies could only cower, were God to go against them (81:14). Apart from such a reversal, nothing will change. It is the height of spiritual arrogance to ask for God’s help while in a state of religious deafness and recalcitrance. Such stubbornness is equal parts immorality and stupidity.

God is ever ready to feed the people with wheat and honey the moment they act positively. Short of that, there is only spiritual stalemate and religious enervation. It is a sorry state for the community. It is even sorrier given that the condition is freely chosen. There are alternatives if only the community would embrace them.

Perhaps most startling about this psalm is that it functions as an order of service, a liturgy. How ironic it is that, in a context of worship wherein God’s wondrous deeds are acknowledged, the people remain fixed in an attitude that keeps God at a distance. It remains baffling that one would engage in a liturgy such as Psalm 81 and not commit to amendment of life. God remains ready to respond favorably to the people, but stubbornness is the ultimate impediment.

<<Previous Lectio   Back to Psalms   Next Lectio>>