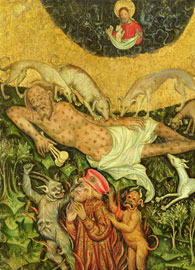 Mark Twain once quipped, “It ain’t the parts of the Bible that I can’t understand that bother me, it’s the parts that I do understand.”

As we listen to Jesus tell these remarkable “stories with intent” called parables, there are things we may not fully understand. But we should not allow this to trouble us unduly; there is plenty for us in Jesus’ parables that we can readily understand. Jesus really got under the skin of those who first heard these pointed stories. He slipped under their defenses, and called for response and change. He also does so with us today.

This week’s Lectio covers a lot of territory, including stories about Jesus and stories Jesus tells. The seemingly disparate material appears to be only loosely held together, and does not respond to well-meaning efforts to outline it neatly. This can lead linear people like me to be frustrated.

Luke is difficult to outline, and some sections are more difficult than others. I suggest, however, that in today’s Lectio there are two broad themes that unfold:

Luke 16: Money and Our Responses to It

The first parable, often called “The Parable of the Shrewd Manager,” is one of those that may make us scratch our heads and say, “I wonder what in the world Jesus means by this?” A woman once came to a preacher after hearing a sermon on this parable. Obviously troubled by the sermon, she asked whether Jesus’ parable meant that any and all shady financial practices are all right if they succeed in getting us out of trouble. A Roman emperor, sometimes called Julian the Apostate, used this parable to claim that Jesus’ followers were liars and thieves, and that noble Romans should reject all such corruptions.

Though we don’t have space to summarize all the interpretation options in this parable, here are a few highlights to observe:

In between the two parables about money, Jesus teaches his disciples to use money in faithfulness to God. If we fail to regard money as a trust from God rather than as a personal possession, we will become torn between two masters. Declares Jesus, “You cannot serve God and wealth” (16:13).

This doesn’t sit well with Pharisees, who, as Luke describes them, are “lovers of money.” They ridicule Jesus’ words (16:14). These religious leaders are setting aside calls from the prophets of old to care for the poor and needy. Another “setting aside” of God’s concerns involves the relative ease of divorce, which was accepted in Jesus’ day by all but the strictest of Jewish religious leaders (16:18).

The second parable about money (16:19–31) is also introduced with the phrase, “There was a rich man who .…” Some see in it a description of the afterlife for both the wicked and the righteous. But the parable’s context indicates that its intended focus is again money. Parables are not the same as allegories, in which every detail may mean something. Instead, a parable usually has one primary focus.

This parable is the kind of “pearly gates” story well known in the ancient Near East. These stories frequently contrasted adversity in this life with reward in the next. Jesus’ parable, however, is not limited to an interpretation that simply says, “This life may be a bear, but take heart! All will be righted in the next life.”

The poor man in the story is named Lazarus. The rich man is never named. Today we see “Lazaruses” panhandling on street corners or sleeping in homeless shelters at night. We see Lazaruses at a greater distance from us in the billions of poor in our world. But do we see the rich man in us? Even modest, middle-class Americans, who in our troubled economy are not feeling very well off, are nevertheless the affluent of our world.

The rich man in Jesus’ story does nothing for the Lazarus at his gate, who tries to survive on scraps from the rich man’s table. Are not Pharisees, these “lovers of money” (16:14), behaving the same way toward people like Lazarus, whom Jesus graciously invites to the heavenly banquet (14:10, 13)? Could the rich man in Jesus’ parable also be like the older brother of an earlier parable of grace (15:11–32), who wanted to keep unsavory folks out of sight and certainly not celebrated?

When Lazarus dies, like the prodigal son who was graciously received home by his father, the poor man is “carried away by the angels to be with Abraham” (16:22). When the rich man dies, however, he ends up in Hades. This is equivalent to “Gehenna,” or a place where the wicked dead are tormented. [Author’s Note 4] The rich man’s attempts to negotiate for himself and his family are futile. God has offered grace and communicated through “Moses and the prophets” (16:31). But when there is no human response to God’s grace, eternal consequences follow.

In this parable, misuse of money betrays unfaithfulness to God’s concerns and to Jesus’ kingdom mission. Such misuse of resources has eternal consequences. Money, while neither good nor evil in itself, is hazardous. The Apostle Paul writes to Timothy, his ministry protégé, about the danger of seeking to be rich.

Those who want to be rich fall into temptation and are trapped by many senseless and harmful desires that plunge people into ruin and destruction. For the love of money is a root of all kinds of evil (1 Timothy 6:9–10, emphasis mine).

Our use of money may express good judgment and faithfulness to God — or exactly the opposite.

The second broad theme that unfolds in this section of Luke is faithfulness and forgiveness. This section begins with short, direct teachings, leading into two parables. The parables are followed by more teaching, as Jesus and his disciples continue on the road to Jerusalem. Here are brief summaries of seemingly disparate warning-filled teachings of Jesus:

Having looked only too briefly at the varied warning-filled sayings of Jesus, we move now to the two parables in the early part of Luke 18.

The first of these two parables is another puzzler. A persistent widow “wears out” an unsympathetic judge with her “continually coming” to seek justice for herself (18:5). It’s only to get rid of her that the heartless judge grants her request. But is prayer really our attempt to wear down a God who doesn’t want to be bothered with us?

No, instead this is one of the “how much more” sayings of Jesus. If even an unjust judge will give the persistent widow justice, how much more will a just and compassionate God do so in response to persistent prayer! “Jesus told them this parable about their need to pray always and not to lose heart” (18:1). Be faithful and be persevering in prayer.

In the second of this pair of parables, a tax collector, low in the religious and social pecking order, and a highly regarded Pharisee are both in the temple to pray. The outcome of this story is expressed not in liturgical language having to do with temple worship, but in legal-sounding terms of justification for one rather than the other:

When we stand before God, we do not beat our chests and celebrate our worthiness, as does the Pharisee. Rather, we acknowledge our absolute dependence upon God’s mercy, as does the tax collector. Vindication, or being set right before God, comes through persevering, faithful praying, and humbly casting ourselves on God’s mercy.

The journey to Jerusalem is coming to its climax. In the opening verses of the next Lectio, we read Jesus’ words to the 12:

See, we are going up to Jerusalem, and everything that is written about the Son of Man by the prophets will be accomplished (18:31).

This “training journey” for the 12 disciples is coming to an end. Now, what they have learned will be tested. Sadly, Luke reports, “They understood nothing about all these things” (18:34).

Our journey with Jesus continues. Are we watching and listening and understanding?

Charging any interest at all, let alone charging exorbitant interest on debts, was forbidden in ancient Israel. But there is evidence that charging interest still took place. Some scholars suggest that the rich lender in Jesus’ parable did, in fact, charge very high interest, measured in large amounts of oil and wheat. If so, what the manager did for the debtors was to eliminate the interest from what was owed. That way, the lender could not contest the bottom line without revealing that he had been inappropriately charging interest.

Helmut Thielicke, The Waiting Father: Sermons on the Parables of Jesus (Harper and Brothers, 1959), p. 94.

Gehenna, or the Valley of Hinnom, outside Jerusalem was the garbage dump of the city. Fires consistently burned in Gehenna. This was also where, during relapses into paganism in Israel’s history, human sacrifice had been offered. When people in ancient Israel thought of punishment after death, this valley is what came to mind as an appropriate symbol.

<<Previous Lectio   Back to Luke   Next Lectio>>