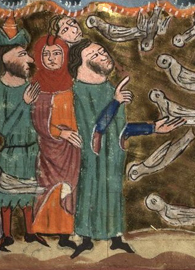 There is a cycle of events that happens throughout the book of Numbers, introduced in Numbers 11:1–2:

That this cycle happens over and over again is crucial for understanding why God gets so angry.

Numbers 11 is not the first time the people have complained — in fact, their complaints began immediately after the exodus from slavery! Over and over, the people chosen by God, delivered from slavery in Egypt by God, grumble and complain against God.

The problem is not just that they complain: the book of Psalms contains more psalms of lament than any other type of psalm, and those are filled with specific, detailed complaints. In this chapter, we even have Moses complaining in Numbers 11:11–15, as he says he would prefer death to a continuation of the current situation.

Not only does Moses complain, but he also seems to doubt God, according to 11:21–22. No, God’s anger and punishment are not because God wants people to keep a stiff upper lip. It is that through their complaints, the Israelites demonstrate — again and again — that they do not trust the God who chose them, who delivered them, who is God with and for them. Numbers 11:20 expresses it clearly: “you have rejected the LORD who is among you.”

This chapter is bookended with two geographical locations and names: Taberah (Numbers 11:3), which means “burning,” because the fire of the LORD burned against the people there, and Kibroth-hattaavah (Numbers 11:34–35), which means “graves of craving,” because it is where the bodies of the people who had craved meat get buried. Both of these are reminders of the seriousness of God’s punishment.

“If Only We Had Meat to Eat”

After the cycle has been introduced in Numbers 11:1–2, Numbers 11:4–6 presents the main issue in this chapter: they want to eat meat. This is not bad in itself; this chapter is not a vegetarian manifesto.

The problem is the way it gets expressed. With weeping, the Israelites say, “If only we had meat to eat! We remember the fish we used to eat in Egypt for nothing, the cucumbers, the melons, the leeks, the onions, and the garlic; but now our strength is dried up, and there is nothing at all but this manna to look at” (Numbers 11:4–6).

One of the perpetual problems with the Israelites is their spiritual amnesia, though here we see that they have a very selective memory about Egypt. That which they used to eat “for nothing,” or “free,” was what they ate when they were slaves.

Additionally, the recollection of the food in Egypt is contrasted with “this manna.” As if to remind the Israelites — or us — about manna, the following verses give a brief explanation of its appearance and taste, as well as the miraculous way it would fall, like dew, each night. Ironically, unlike the food they remember, the manna does come at no cost to them. God started providing it when the Israelites entered into the wilderness (Exodus 16), and has continued to provide it until this time [see Author’s Note 1]. By complaining about the manna here, Israel is essentially saying that what God has given them does not suffice.

Another clue about the problem of the chapter may come in the description of the instigators in 11:4, “the rabble” [see Author’s Note 2]. Because they are distinguished from the Israelites, many believe that these are the foreigners who came out of Egypt with the Israelites (compare Exodus 12:38). The word occurs only here, though, and even if they are a bad influence on the Israelites, we must balance that with the commands discussed in the previous Lectio that an Israelite is to “love the alien as yourself” (Leviticus 19:34).

At the sound of the people’s weeping, God becomes angry, and 11:10 tells us that “Moses was displeased.” That is actually a fairly tame translation of the Hebrew, which literally says, “and it was evil in Moses’ eyes.” As mentioned above, Moses responds with his own complaint. It sounds fairly whiny and/or demanding; “put me to death at once” (11:15). But we can see an important distinction between Moses’ complaint and that of the Israelites. The Israelites weep. Moses directs his complaint in a straight line to God.

And God responds not with anger, not with punishment, but with a direct answer, “I will take some of the spirit that is on you and put it on [the elders], and they shall bear the burden of the people along with you so that you will not bear it all by yourself” (11:17) [see Author’s Note 3]. God also responds directly to the complaint of the people — though, again, we must note that they did not ask God for meat. God’s answer almost has a “you asked for it” sense to it: “Therefore the LORD will give you meat and you shall eat … until it comes out of your nostrils and becomes loathsome to you” (11:20).

Apparently Moses is not done with questioning God, asking what may be a practical question about the number of people and the amount of meat they would need. Still, this sounds a lot like doubting God, which is how God seems to hear it, answering Moses’ question with one of his own, “Is the LORD’s power limited?” (11:23). The Hebrew is literally, “Is the LORD’s hand too short?” — an image that reappears in Isaiah 50:2 and 59:1. As God says, Moses — and we — will see whether God’s word comes true or not (11:23).

First, God’s word about the spirit comes true in 11:24–30. Even those who did not come to the tent, but remained in the camp — Eldad and Medad — receive the spirit and prophesy in the camp. This causes Joshua some consternation, perhaps because he perceives it as a threat to Moses’ authority. Moses, though, is neither threatened nor jealous, but says that, ideally, all of Israel would qualify to be prophets (11:29).

This verse is, in some ways, a key to understanding the entire chapter. A prophet is one who has a close, direct connection with God, who speaks with and on behalf of God [see Author’s Note 4]. Again, one of the problems is that the Israelites complain to one another, to themselves, but seem to lack the ability to talk with or hear from God. Moses’ answer to Joshua expresses the deep longing that all of them would have a close, direct connection with God.  Even though Numbers 11:24–30 describes the sharing of the spirit with the 70 elders, it is careful to point out in 11:25 that they did not prophesy again. Even though Moses is willing for God to share the gift of prophecy with all others, their endowment is temporary, unlike the prophetic gifts given to Moses (compare Deuteronomy 34:10).

Second, God’s word about the meat comes true in 11:31. This is emphasized briefly, but pointedly, in Psalm 105:40: “They asked, and [God] brought quails” [see Author’s Note 5]. Verse 31 says that the quails are brought by a wind that went out from the LORD, though the Hebrew word for wind is the same as the word for spirit, as in 11:25–29. And how many quails there are! Two cubits is roughly equivalent to a yard.

Imagine the Israelites walking a day’s journey around the camp in quails three feet high. They work through the day and night, and the next day to gather the quails and “spread them out” (11:32). It could be that the spreading out was in the sun, to dry and preserve the meat for the future. It could also be that they spread them out to immediately eat raw: that their craving for the meat was so great that they gorged themselves on the raw birds.

Would that the story ended there, with the demonstration that God’s hand is not too short or that God can provide not only every need, but every desire of God’s people. Instead, this chapter ends with the disturbing image that, “while the meat was still between their teeth” (11:33), God gets angry, and strikes the people with a great, deadly plague.

Perhaps the plague was reserved for the “rabble” or “riffraff” introduced in 11:4, as they were the ones who had the craving. Some suppose that 11:34 implies that most of the Israelites escaped punishment. Not according to Psalm 78:30–31, though, which describes the occasion even more vividly: “But before they had satisfied their craving, while the food was still in their mouths, the anger of God rose against them and he killed the strongest of them, and laid low the flower of Israel.”

I have no quick or easy answer for why God would answer the people’s request, and then get angry and punish them. This text, like many in Israel’s story, testifies that God is a God to be feared. But I also cannot help but also hear the overarching message from this chapter that God is to be trusted, not rejected. Even as Psalm 78 describes God’s anger in the wilderness, it also describes God’s grief when the Israelites rebel (Psalm 78:40). Yes, God is powerful. Yes, God deserves and demands respect. Yes, God gets angry. And yes, God answers requests, feels grief, and provides.

But according to Exodus 16:13, at that time, God provided quail along with the manna.

The JPS (Jewish Publication Society) translates this as “riffraff,” a word that mimics the sound of the Hebrew word ’asafsuf.

A clear and comprehensive description can be found in Abraham Heschel, The Prophets (New York: HarperCollins, 1962).

Psalm 78:26–29 describes it in more detail, “He caused the east wind to blow in the heavens, and by his power he led out the south wind; he rained flesh upon them like dust, winged birds like the sand of the seas; he let them fall within their camp, all around their dwellings. And they ate and were well filled, for he gave them what they craved.”