Selections From the Prophets Week 8

Jeremiah (Postexilic) — Seeking the Welfare of the City: Jeremiah 29:4–14 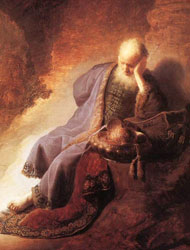 Thus says the LORD of hosts, the God of Israel, to all the exiles whom I have sent into exile from Jerusalem to Babylon: Build houses and live in them; plant gardens and eat what they produce. Take wives and have sons and daughters; take wives for your sons, and give your daughters in marriage, that they may bear sons and daughters; multiply there, and do not decrease. But seek the welfare of the city where I have sent you into exile, and pray to the LORD on its behalf, for in its welfare you will find your welfare. For thus says the LORD of hosts, the God of Israel: Do not let the prophets and the diviners who are among you deceive you, and do not listen to the dreams that they dream, for it is a lie that they are prophesying to you in my name; I did not send them, says the LORD.

For thus says the LORD: Only when Babylon’s seventy years are completed will I visit you, and I will fulfill to you my promise and bring you back to this place. For surely I know the plans I have for you, says the LORD, plans for your welfare and not for harm, to give you a future with hope. Then when you call upon me and come and pray to me, I will hear you. When you search for me, you will find me; if you seek me with all your heart, I will let you find me, says the LORD, and I will restore your fortunes and gather you from all the nations and all the places where I have driven you, says the LORD, and I will bring you back to the place from which I sent you into exile.

What does it mean to be called to stay in a place that God desires you to be, yet a place that is oppressive, heartbreaking, and antagonistic to all you hold dear?

As we turn now to the prophecy of Jeremiah, we are introduced to a theme that runs throughout the Old Testament and the story of Israel: living as people in exile.

Jeremiah’s 52 chapters testify to what it means to live utterly abandoned to one’s circumstances during a season of great adversity. Referred to by scholars as the “weeping prophet” because of the emotive nature of his discourse [Author’s Note 1], as well as his laments and confessions [Author’s Note 2], Jeremiah embodies the breadth and depth of the human condition. But he is also a prophet who is familiar with the priesthood and temple worship practices.

As we hear in the first verse of Jeremiah, he is the “son of Hilkiah, of the priests who were in Anathoth in the land of Benjamin” (1:1). Many of the images that populate Jeremiah’s prophecy come from worship practices:  visions of an almond rod (1:11–12), a boiling pot (1:13), and baskets of good and bad figs “placed before the temple of the LORD” (24:1) show the importance of worship as the central sustaining factor for a robust life [Author’s Note 3].

As a member of a priestly family with access to the inner workings of temple life, Jeremiah knows the grandeur of existence:

Yet Jeremiah’s prophetic call meant that he was often aligned not with the comfort of temple life, but with the life of an exile. The book of Jeremiah spans the time before, during, and after the Babylonian conquest, destruction of the Jerusalem Temple, and the exile of Jerusalem leadership. The book of Jeremiah acknowledges that Jerusalem was a holy city, yet Jeremiah’s message about the impending exile landed him in prison and torment.

Build Places of Hospitable Dwelling in Places of Exile

In our reading for this week, Jeremiah offers a letter to the people in exile on behalf of God that is both a comfort and a commissioning. Rather than stir up violent revolt against their captors or tell the people to merely bide their time in quiet, Jeremiah offers Israel a strangely mundane task that in itself is revolutionary. “Build houses and live in them; plant gardens and eat what they produce” (29:5), says the prophet; “seek the welfare of the city where I have sent you into exile, and pray to the LORD on its behalf, for in its welfare you will find your welfare” (29:7).

In short, this weeping prophet is calling an exiled people to make a life where they are. The Hebrew word used in this passage translated in the NRSV as “houses” is bāttîm, singular bayiṯ. This expansive term is not only a physical dwelling place, but a house “in the greatest var[iation] of applications, espec[ially] family” [Author’s Note 4]. In this regard, to build is not merely for one’s own bloodline, but for the prospect of hospitality as well.

In short, even in exile we need to be ready to entertain the stranger who may be the face of God to us. The radical nature of this command is that the Israelites would make their home in this foreign land and that, as seen in the generations to come, would result in their own families being connected with the families of the other in powerful ways.  This has large implications for postexilic Israel (in contrast to Ezra and Nehemiah, and the call to separation from the foreign women) and mirrors the movement of the Spirit found in the Council of Jerusalem of Acts 15 when Jews and Gentiles are brought together into a profound community known not by external signs but by a circumcision of the heart that is possible only through the work of God.

Sure, tears will flow in this place of exile. Yes, they will probably not see Jerusalem in their lifetime, given that the prophet has said that it will essentially be more than one generation:

For thus says the LORD: Only when Babylon’s seventy years are completed will I visit you, and I will fulfill to you my promise and bring you back to this place. (29:10)

Yet exile does not prevent us from living as God would have us live. While this imprisoned generation may never see the promise of Jerusalem restored, they are to live so that the following generations will be able not only to see this land — “Take wives and have sons and daughters; take wives for your sons, and give your daughters in marriage, that they may bear sons and daughters; multiply there, and do not decrease” (29:6) — but to rebuild it with the skills of growing crops, building homes, and nurturing families.

This sets a rather somber tone for one of the most famous passages in the book of Jeremiah:

For surely I know the plans I have for you, says the LORD, plans for welfare and not for harm, to give you a future with hope. Then when you call upon me and come and pray to me, I will hear you. (29:11–12)

This promised hope and future that God has in store may not be seen in our lifetimes. Perhaps our lives will be lived out in exile.

But the future hope that God has in store is larger than our lives, and therefore we are to live toward a horizon that extends farther than our eyes can see, higher than our imaginations can take us, and certainly much longer than the years of our lives. While some of the prophets will enter the land of promise and begin the restoration work in that place, we also need to be aware that perhaps our call is to build homes, grow crops, and nurture a generation in a place that is difficult.

In 1992, at the height of the Bosnian conflict, Vedran Smailović, a member of the Sarajevo Opera Orchestra, lost 22 friends, who, while waiting in a breadline at a bakery, were killed by mortar fire that also destroyed the bakery and the opera house. For many days, this lone cellist dressed in full evening tails, sat in a burned chair found in the rubble, and played the famous Adagio in G Minor, composed by Giazotto (d. 1998) under (supposedly) the inspiration of what he claimed was a fragment of a sonata by Albinoni (d. 1750/51) that he had uncovered in the ruins of another city-in-ruins, fire-bombed Dresden.

Taking up his cello in a place of utter despair, similar to Jeremiah, perhaps Vedran Smailović was embodying what the Lord requires of us sometimes — to stay where we are and breathe life into the world of darkness so that that another generation will stand tall, have children, and make a life in places of despair, fueled by a transcendence and light that brings heaven to earth. Yes, there is madness in the world, but there are also faith and hope and love.

Maybe it is madness to weep bitter tears into the hard soil of exile. But those tears may water the crops of hope, and the melody we play may indeed move from a solo to a full orchestra of promise. Such is the way of building houses and planting crops in order to show that the promise of the Kingdom of God is alive and well. Let those who have eyes to see it and ears to hear it look and listen with others as we all grasp for promise.

Passages such as these certainly give evidence to a prophet who wasn’t shy about sharing his emotions:

Some of the accounts of Vedran Smailović’s heroic act of playing Albinoni’s Adagio in G Minor are contested as a result of a novelization of the events that was published in 2008 by Steven Galloway titled The Cellist of Sarajevo.  This novel was written without consulting Smailovíc and caused him great anguish in fictionalizing this tragedy.  In an article in The Times of London, David Sharrock quotes Smailovíc as saying “I didn’t play [just] for 22 days, I played all my life in Sarajevo and for the two years of the siege each and every day.” See David Sharrock, “Cellist of Sarajevo, Vedran Smailović, is wounded by words,” The Sunday Times, June 7, 2008. In the end, that he did play amidst this tragedy is not to be disputed and is a very real statement of protest and beauty in the midst of loss.  For a longer reflection on music in places of brokenness, see Jeffrey F. Keuss, “Bonus Tracks,” in Your Neighbor’s Hymnal: what popular music teaches us about faith, hope and love (Cascade Books, 2011).

One Comment to “Jeremiah (Postexilic) — Seeking the Welfare of the City: Jeremiah 29:4–14”