James as the Introduction to the Catholic Epistle Collection 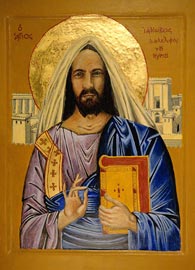 We have completed our tour of the Letter of James. But our work isn’t finished yet! Indeed, this letter did not come down to us in isolation, but was delivered as part of a larger package — a whole Scripture — within which James was intentionally placed in order to perform a particular role. In order to really receive James as Scripture, we must attend to the role it plays in the Bible.

In our first week, I spoke of the diversity of our holy Scripture. The Bible is a single book, yes, but this book is in fact a collection of various “book collections” — prophets, gospels, letters, etc. — designed to function together to provide us with a whole word from God. Viewed from this perspective, we see that the letter of James has been passed down to us as the lead letter in a collection called “the Catholic Epistles” (the letters of James, Peter, John, and Jude).

As I’ve already described, historical evidence strongly suggests that one of the reasons this collection was created was as a response to people we called “Paulinists.” These folks championed the Pauline writings in a manner that got them into trouble. Some ended up opposing Christianity and Judaism. Others opposed the present activity of the Spirit with the revelation of God made known in Christ Jesus. Many others opposed associating faith with obedience.

As it turns out, our earliest accounting for why these books were added to the Bible insists that they were included to ensure that believers didn’t misread Paul and end up disconnecting faith and deeds. According to Augustine of Hippo (writing ca. 413),

Even in the days of the Apostles certain somewhat obscure statements … of the Apostle Paul were misunderstood, and some thought that he was saying this: “Let us now do evil that good may come from it” [Romans 3:8] because he said “Now the law intervened that the offense might abound. But where the offense has abounded, grace has abounded yet more” [Romans 5:20] …. Since this problem is by no means new and had already arisen at the time of the Apostles, other apostolic letters of Peter, John, James and Jude are deliberately aimed against the argument I have been refuting and firmly uphold the doctrine that faith does not avail without good works. [Author’s Note 1]

Augustine’s essay goes on to offer a wide-ranging reading of the apostolic letters in order to arrive at a wholly apostolic understanding of the relation between faith and works. Augustine’s primary Pauline text in the essay (repeated 10 times) is Galatians 5:6, which insists that “the only thing that counts is faith working through love.” This is interwoven with almost 30 references to the various Catholic Epistles and many more from the gospels.

If Augustine is right (and I think he is), it means that some of us might need to change our understanding of how the Bible is meant to function. Though we might be troubled by apparent “contradictions” in the Bible, we needn’t be; instead, we might employ other ways of accounting for how texts relate to one another. Texts may be in tension, or in conversation; they may be meant to stand in a complementary relationship with other texts, or to offer correctives to potential misunderstandings of other texts. All this is to say that the Word of God is not found in single verses quoted out of context. The Word is heard by means of Spirit-inspired, wise syntheses of the diverse words found in our Scripture.

I believe the letters of the Catholic Epistles collection are meant to be read together in order to offer up a unified theological witness. [Author’s Note 2] Let me close this Lectio series on James, then, by offering up a handful of ways in which the letter sets the tone for the Catholic Epistle collection as a whole. You might begin by reading all seven letters in sequence (the whole collection is smaller than 2 Corinthians). I have three points to make.

The Catholic Epistle collection ends with a little letter from Jesus’ little brother Jude. This “servant of Jesus Christ” begins his letter reiterating what I take to be the central theme of the collection as a whole: Some believers are twisting the grace of God into a license to act immorally. They want to claim Jesus as “Savior” without also making him “Lord” and “Master” of their lives (Jude 4). Jude has hard words for us. Remember, he says: long ago God saved people out of Egypt only to condemn them later in the desert because they rebelled (Jude 5). Remember the horrible judgment suffered by the peoples of Sodom and Gomorrah, whose unchecked lust led them to abuse vulnerable strangers (Jude 7). Remember that the Savior you adore is coming in power to judge us all for our ungodliness (Jude 14–15).

How ought we to live as a result of this knowledge? Jude ends with five quick bits of advice we’d be wise to heed (Jude 20–23). [Author’s Note 4] “Build yourselves up on your most holy faith” — that is, work to grow in Christian knowledge and virtue. Strive to “pray in the Holy Spirit,” not in the worldly spirit of desire, anger, or envy. Rather than assume a passive posture in the face of God’s forgiveness, work to “keep yourselves in the love of God,” for doing so will enable us to live in hopeful expectation of “the mercy of our Lord Jesus Christ” on judgment day.

Finally, since we’ve already been told that “mercy triumphs over judgment” (James 2:13), the best way to prepare for God’s coming judgment is to offer mercy to everyone — regardless of whether they are doubting Christians, disputing non-Christians, or those depraved by habitual sin (Jude 22–23). “We love,” says 1 John, “because he first loved us.” The Catholic Epistles as a whole insist on this crucial piece of “wisdom from above”: We who have experienced God’s love must respond by humbly turning our whole lives — our heads, hearts, and especially our hands — into instruments of God’s love and peace for the healing of the world.

Augustine, On Faith and Works, Chapter 21.

See the chart provided at the end of this essay to get a sense of the different emphases found in the Pauline and Catholic Epistle collections. And again, let me recommend my forthcoming book with Rob Wall, Reading the Epistles of James, Peter, John, and Jude as Scripture: The Shaping and Shape of a Canonical Collection (Eerdmans, Nov. 2013).

As I said earlier, I think it is important to distinguish different kinds of suffering before assuming that all suffering is meaningful and designed to purify faith. You may recall that James takes sickness out of the equation; the pain of resisting seduction is a trial that brings growth, but the pain caused by sickness and disease is something God wants to alleviate. What about other kinds of suffering? A wise person I know once offered up this distinction: suffering that is taken up is a trial, but suffering that is placed upon you is oppression. There is a difference between a disciple and a doormat! So, for example, it would be theologically incorrect to tell a poor person or an abused spouse that such suffering is a trial of faith, or that such suffering is a cross to bear in this world. No, that kind of suffering is the kind for which Christ died to save us! It is the call of the Church, the community of the Holy Spirit, to band together in order to alleviate that sort of suffering.

Notice how this beautiful little section not only is fully Trinitarian but also incorporates the central Christian virtues of faith, hope, and love. We would do well to commit these verses to memory.

<<Previous Lectio   Back to James   Next Lectio Series (Revelation) >>