Selections From the Prophets Week 1

In 1 Kings 18:20–40, Ahab gathers all the Israelites on Mount Carmel for a showdown between the prophet Elijah and the prophets of Baal. This is a time of reckoning akin to a Wild West shootout, where contending powers gather in one place for a “winner take all” demonstration of power. In Verses 21 and 22, Elijah sums up the scenario:

Elijah then came near to all the people and said, “How long will you go limping with two different opinions? If the LORD is God, follow him; but if Baal, then follow him.” The people did not answer him a word. Then Elijah said to the people, “I, even I only, am left a prophet of the LORD; but Baal’s prophets number four hundred fifty.”

Elijah then calls out to the prophets of Baal and offers a challenge: two bulls will be brought out, one for the prophets of Baal to prepare for ritual sacrifice to their gods and the other for Elijah to offer to the one true God. No fire is to be set under either offering, and the prophets are to call upon their respective deities to ignite the fire.

Once the offerings are prepared, the prophets of Baal call out to their deity “from morning until noon,” “But there was no voice, and no answer. They limped about the altar that they had made” (18:26). They continue calling out to Baal — and “cut themselves with swords and lances until the blood gushed out over them” (18:28) — “until the time of the offering of the oblation” [sunset] (18:29).

Elijah then calls for four jars of water to be poured on the offering, not once, not twice, but a ceremonial three times (18:33–34), “so that the water ran all around the altar, and filled the trench also with water” (18:35). Elijah then turns to the drenched offering and, in Verses 36–37, prays to God:

O LORD, God of Abraham, Isaac, and Israel, let it be known this day that you are God in Israel, that I am your servant, and that I have done all these things at your bidding. Answer me, O LORD, answer me, so that this people may know that you, O LORD, are God, and that you have turned their hearts back.

Before we find out what happens, let’s first consider a basic question from this narrative.

Who Are the Prophets? Nourishers and Seers

When we meet Elijah in this passage from 1 Kings 18, we are told that he is a prophet and that he is confronting the prophets of Baal. What do we know about prophets? Who are they in the Old Testament, and what role do they play for Christians today?

Two words often used for “prophet” in Hebrew are nevi’, which comes from the term niv sefatayim, meaning “fruit of the lips,” and ḥōzeh, which is translated “seer” — both describing the prophet’s role as a provider of nourishment and a truth-teller. In seasons of thirst and hunger, the prophets provide fruit from the LORD to nourish and strengthen the people, and will also point to that which is neglected, overlooked, and disregarded [see Author’s Note 1]. Prophets function as the intermediary between God and humanity, both carrying messages of nourishment and truth-telling from God to the people and speaking on behalf of humanity into the very ear of God. In Judaism, the term Nevi’im, “Prophets,” is not only a designation for a particular group of people, but also the name given to the second of the three major sections in the Hebrew Bible, the Tanakh. The Nevi’im falls between the Torah (Law) and the Ketuv’im (Writings).

The Nevi’im is further divided into two groups:

(It is important to note that the order of the prophetic books for the Christian Old Testament differs somewhat from the Nevi’im in the Hebrew Bible.)

While the prophets we will look at throughout this study will be shared in both Christian and Jewish traditions, how we read these texts and what they point to differ, as Christians will see evidence pointing to the incarnation, ministry, death, and resurrection of the Messiah, Jesus of Nazareth. We will explore some of this next week when we reflect on the role the prophets play in the New Testament. 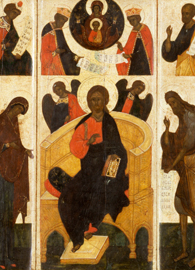 EnlargeThe Word of God Through Personalities

Selections from the books of Nevi’im known as the Haftarah are read publicly in the synagogue after the reading of the Torah on each Shabbat [Sabbath], as well as on Jewish festivals. This is important for Christians to understand as well: when the Torah is read in the synagogue, it is a word from the prophets. In this we are reminded of the very particular, flesh-and-bone, reality of God’s working with humanity — the word of God is not merely written down to be memorized on stone tablets or in static dogmatic formulas, but also spoken forth through particular people with particular personalities in particular contexts. It has been said that when God has something important to say, God will wrap it in flesh. This is the essence of the prophets: the messengers of God in the flesh.

Prophets Are a Diverse Group

Prophets are not a homogeneous group:

While there is a range of diverse backgrounds, historical locations, and particular concerns that make the prophets very diverse, there are certainly themes that unify the prophets and are consistent throughout the literature, as we shall see in the weeks to come. As Old Testament scholar Brevard Childs notes, “There is no one hermeneutical key for unlocking the biblical message, but the canon provides the arena in which the struggle for understanding takes place.” [see Author’s Note 2] In the canon that is our collection of texts we call Scripture, the prophets struggle for understanding with us and for us. Key to this struggle is a call to justice (mišpāṭ) and to righteousness (ṣedāqâ). In the weeks to come, you will hear over and over again the call to justice and righteousness, which will challenge the status quo, call for an uprooting and literal pruning back of the dominant power structure of the day, and plea for us to turn (hāpak) away from sin and face God anew. Jewish scholar Abraham Heschel in his wonderful book The Prophets evocatively describes the prophets in this way:

Who could bear living in a state of disgust day and night? The conscience builds its confines, is subject to fatigue, longs for comfort, lulling, soothing. Yet those who are hurt, and He Who inhabits eternity, neither slumber nor sleep. The prophet is sleepless and grave. The frankincense of charity fails to sweeten cruelties. Pomp, the scent of piety, mixed with ruthlessness, is sickening to him who is sleepless and grave ….

The prophet is human, yet he employs notes one octave too high for our ears. He experiences moments that defy our understanding. He is neither “a singing saint” nor “a moralizing poet,” but an assaulter of the mind. Often his words begin to burn where conscience ends. [Author’s Note 3]

Prophets Come in the Fullness of Time, but Not Necessarily on Our Schedule

While our encounter with Elijah and the prophets of Baal in 1 Kings 18 is preceded by Ahab’s calling for a meeting on Mount Carmel, this is not the typical scenario, as we shall see in the weeks to come. A distinction of the prophets is that they most often come forth without being sought for — they are spurred on by God, having seen the truth of the state of the nation, speaking out when others are indifferent or ignorant to the conditions of sin that have separated the people from their God.

While the prophets would speak on behalf of God, the people are often left with a choice of whether to heed the counsel of the prophet. No matter how compelling, charismatic, or provocative the prophets are, no matter how God uses them to make the message of God crystal clear so that there can be no denying the state of things and nothing left to the imagination, the people are still left with the freedom to follow the leading of the prophet or not (Amos 7:15; Isaiah 6; Jeremiah 1:4-10; Ezekiel 1).

In this we find a powerful lesson in the weeks to come: our knowing the truth of God doesn’t mean we will immediately repent from our ways or follow the words of truth offered to us. No, in the end we have to make a decision, and this decision is more than merely uttering words of agreement. To follow God is an embodied change of heart, mind, and soul.

As we heard in Verse 21, Elijah calls out to the people and makes this statement:

How long will you go limping with two different opinions? If the LORD is God, follow him; but if Baal, then follow him.

The Hebrew word for “limping” occurs again in Verse 26, when, as we saw earlier, the prophets of Baal “limped around the altar” after Baal failed to ignite the fire for the offering. Elijah then calls for three dousings of water to be poured on the altar and calls upon God in Verse 36 to “let it be known this day that you are God in Israel.” What happens next in Verses 38–39 needs to be read and heard, for this is an instance where only Scripture can approach the grandeur of God’s majesty:

From Limping to Following

The passage concludes with the prophets (who have been shown to be false prophets) of Baal (who has been shown to be a false deity) being killed, and the people turning their hearts to God. The message brought forth in 1 Kings 18 will underscore many of the reflections on other prophets and prophetic literature over the next few weeks. Are we to limp before false gods, or will we follow the LORD God with all our heart, soul, and strength? Elijah compares the worship of the people in Verse 21 to the irregular ritual dancing of the prophets of Baal in Verse 26, saying that, because the people of Israel refuse to choose between the LORD and Baal, wanting to retain both, their faith itself is limping.

While the contexts will be radically different, and the prophets themselves very different from one another, the task of the prophet and the call to the people will continue this theme: will we limp after falsehood or follow into wholeness the One who is not only the God of Abraham, Isaac, and Israel, but the Christ, the final word of God, both the Alpha and the Omega?

Why Read the Prophets? An Invitation to Dance

Next week we will turn to the New Testament to set a context for how we will read the prophets and the prophetic literature in light of the witness of Christ and the early church. As we shall see, the way in which the New Testament reads and dialogues with the prophets will provide a helpful lens toward understanding these ancient testimonies of God’s call to a people – testimonies that have present and future implications to our life of faith. As Jesus states in the Sermon on the Mount in Matthew 5:17, “Do not think that I have come to abolish the law or the prophets; I have come not to abolish but to fulfill.” Where limping is overturned by a call to follow, Jesus will take the prophetic task into himself and offer us more than following — we are invited to a fulfillment that moves us into a divine dance.

Back to Selections From the Prophets   Next Lectio>>