The only Scriptures Jesus and his earliest followers recognized and appealed to as God’s authoritative word were those Christians would eventually call the Old Testament. Indeed, this goes for Jesus’ detractors as well, virtually all of whom belonged to various branches of Judaism (it was not known as Judaism in Jesus’ time). Jesus and the earliest Christians (not so designated until later) did not disagree with their fellow Jews over what Scripture was, but only about whether it should be interpreted in the light of what God did in and through Jesus the Christ.

For this reason, the authors of the four New Testament Gospels proclaimed that what God had achieved in Jesus’ teaching, death, and resurrection was consonant with these same Scriptures. The Apostle Paul affirmed that Christ died for our sins “in accordance with the Scriptures,” by which he too meant the Jewish Scriptures/Old Testament (1 Corinthians 15:3). This phrase is found verbatim in the Church’s Nicene Creed: “On the third day he rose again in accordance with the Scriptures.”

The Indispensability of the Old Testament

Paul also asserted that these Scriptures were not only inspired but indispensable for the faith and life of those who followed Jesus (2 Timothy 3:16). It is therefore odd when Christians stress the New Testament in spite of its insistence throughout that the Jewish Scriptures/Old Testament testify amply to God’s fulfilling actions in Jesus the Christ. This is why the Church takes its own Scriptures seriously only when both Old and New testaments are read as one Scripture.

The Synagogue (Jesus and the earliest Christians were all part of the Synagogue/Judaism) divided its Scriptures into three parts: Law, Prophets, and Writings. The Law includes Genesis, Exodus, Leviticus, Numbers, and Deuteronomy, and is sometimes referred to as the Pentateuch. Law is the translation of the Hebrew word Torah.

But in addition to law, Torah means teaching, instruction, and narrative or story in the sense of “gospel” or “good news.” In fact, law in the more technical sense of rules, regulations, and ethics makes sense only in the context of the Torah story, for this story stresses God’s radical grace. 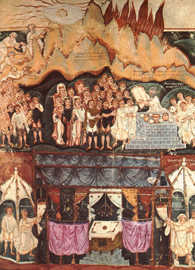 The first narrative section of Torah — Genesis 1 through Exodus 19 — accents amazing, divine grace; then Exodus 20 and following demonstrates how God’s people are to respond to that grace. Biblically speaking, grace always precedes law.

This is why Torah is essential to the rest of the Old Testament, and to the New Testament as well. Everything after Torah in the Christian Bible presupposes and builds on Torah. If we do not comprehend Torah, our understanding of Scripture’s epic story will be truncated, piecemeal, and ultimately distorted. This reasoning stands behind the rationale of the Center for Biblical and Theological Education’s decision to begin the Lectio with Genesis 1–Exodus 19. This material lays the groundwork not only for the rest of Torah but also for the remainder of Christian Scripture.

Torah gives us first the foundational story of creation (Genesis 1:2–2:4a). As God subsequently engages the created order (Genesis 2:4b and following), human beings co-operate with God (by tilling and naming) to produce an idyllic garden setting.

However, disobedience leads to expulsion and a depressing downward trajectory as humanity becomes increasingly wicked (Genesis 3–11). As we might expect, every human failure prompts divine punishment. Disobedience in the garden (Genesis 3) leads to judgment on the woman, the man, and the serpent. The first murderer is condemned to be a perpetual fugitive (Genesis 4). After people become incomparably wicked, worldwide destruction by means of a flood results (Genesis 6–8). Even after this devastation, significant failure persists. It is even found in the family God rescued from ultimate judgment as well as in the people of Shinar who egregiously challenged the divine agenda (Genesis 9:20–27; 11:1–9). The situation remains bleak.

But that is not the end of the matter. Each act of divine judgment has a corresponding act of divine grace. In the garden, God provides appropriate clothing for the human couple. Furthermore, they do not die immediately as was threatened (Genesis 2:17; 3:3). God spares the first murderer from capital punishment. When sin reaches titanic proportions, God provides the means for starting over (Genesis 6:5–8). Even the sin that infects the family of Noah, whom God saved from the great flood, does not prevent its repopulating the earth, which is an implicit act of grace. Only the episode that concludes with Babel seems to have no corresponding act of grace.

This is because the gracious divine action following the Babel episode is the rest of the biblical story, beginning with God’s call of Abraham and Sarah (Genesis 12:1–3). God’s purpose for electing Abraham and Sarah is to bring about the blessing of all others. Their election will eventuate in God’s people, Israel, which is destined to become a holy nation and a kingdom of priests (Exodus 19:6). The New Testament teaches that Israel’s mission is finally and ultimately accomplished in and through Jesus, who is Israel’s Messiah, or Christ. Israel and Jesus together constitute God’s gracious response to the awful condition described in Genesis 3–11.

Thus, Torah accents Abraham’s and Sarah’s call as well as God’s steadfast commitment to them in spite of their disobedience, doubt, and distrust. We learn how Jacob is chosen as the child of promise over his older brother in spite of the dubious behavior of both (Genesis 25:19–34; 27:1–28:5; Romans 9:11–13). After God’s chosen family is threatened by famine and internal conflict, God saves its future improbably through the Canaanite Tamar and the enslaved Joseph (Genesis 36–50). Eventually, God rescues the family after it becomes a people enslaved by mighty Egypt. Once rescued, God directs the people into the future. From this people, Israel, a messiah will come, and through him the completion of God’s purpose for the created order (Exodus 1–19).

Nothing makes sense in the remainder of Scripture without this initial story. It is the beginning and foundational story of our faith.

Ultimately, Torah is a story, a liturgy, and a way of life. It recounts a story of incredible divine grace from a number of fascinating angles. It teaches the community that reveres and finds its identity in this story that worship of a gracious and holy God in both a broad and a narrow sense is a hallmark of its existence. And, finally, it teaches that everything the community does comes under the category of loving and serving this gracious and holy God in every facet of life. This community, in continuity with the Church, the Body of Christ, is to be instrumental in God’s reconciling, redeeming, and restoring the entire created order.

Back to Genesis/Exodus   Next Lectio>>