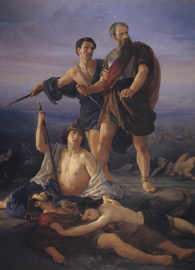 The contents of this Lectio can be summarized briefly as follows: Saul dies and David rises to power. David is not yet king over all Israel; that will take place in next week’s selection of text. But these chapters contain what we knew would happen. More unexpected, perhaps, is David’s response to Saul’s death. Rather than rejoicing that the one who so often sought his life is dead, David laments. In part, this lament can be explained because Jonathan, David’s beloved friend, also dies. But David genuinely mourns over both Jonathan and Saul.

As the last Lectio noted, though David had pledged his sword to King Achish of the Philistines, Achish’s lords did not want David to participate in battle, so Achish sent David back from the campaign against Israel. Therefore, David is not fighting with the Philistines when they kill Jonathan and Saul’s two other sons, Abinadab and Malchishua (1 Samuel 31:2). Saul is so badly wounded by the archers that he asks his armor bearer to kill him so the Philistines cannot “make sport” of his body (31:4). When the armor bearer refuses, Saul falls on his own sword and dies, and the armor bearer does the same. When the Philistines find Saul’s body the next day, they cut off his head, strip him of his armor, and fasten his body to the wall of the city. When the inhabitants of Jabesh-gilead — those Saul saved from Ammonite oppression in 1 Samuel 11 — hear this, they retrieve the bodies of Saul and his sons and give them a proper burial.

The two books of Samuel are divided by Saul’s death. It not only ends the book of 1 Samuel, but it also gets repeated in the form of a report in the first chapter of 2 Samuel. On the third day after David has returned from fighting the Amalekites and rescuing his wives who had been taken, a man arrives from Saul’s camp. He is an Amalekite, and he tells David that Saul and Jonathan are dead. He also tells David — untruthfully — that he killed Saul (2 Samuel 1:10).

David’s response to this news is first and foremost to grieve. He does so by tearing his clothes, mourning, weeping, and fasting until evening (1:11–12). Then David has the Amalekite messenger killed. While David has no love lost for the Amalekites, the reason for this young man’s death is because he said (again, untruthfully) that he had killed Saul. As David repeatedly says, Saul is “the LORD’s anointed” (2 Samuel 1:14, 16; cf. also 1 Samuel 24:6, 10; 26:9, 11, 16, 23).

David’s mourning continues in a formal lament over Saul and Jonathan. This is not quite the same as a psalm of lament, in which a human addresses God about a complaint; instead, David is singing a dirge or lament for the dead. Because this type of song celebrates and honors the person’s accomplishments, it leaves out anything negative. A note in 2 Samuel 1:18 explains that David ordered that the song “be taught to the people of Judah,” and that “it is written in the Book of Jashar.” That book is also mentioned in Joshua 10:12–13, and may be a lost anthology of poems celebrating heroic deeds of Israelites.

Though it was to be taught to — and possibly performed by — the people of Judah, David’s song of lament becomes quite personal as it ends. Verses 1:25–26 shift to the first person, using words like “I” and “me,” and describe David’s grief over his beloved friend Jonathan. As mentioned previously, the song laments not only Jonathan but also Saul, who is included in “the mighty” who “have fallen” (1:25) [see Author’s Note 1]. Saul had become David’s foe and sought to kill him numerous times, but David still admonishes the people not to rejoice at Saul’s death — like the inappropriate daughters of the Philistines (1:20) or the Amalekite messenger — but instead to respond with weeping (1:24).

The Bible not only reminds us of the importance of lament, both public and private, but it even gives us forms such as these that we can adapt in our times of grief. As Ecclesiastes 3:4 says, there is “a time to mourn.” 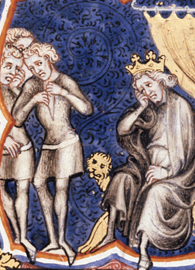 The time of grief does not erase political realities, however, and with the Philistines occupying the land, the people need a king. As David did previously (1 Samuel 23:2, 4, 11, 12; 30:8), he here again inquires of the LORD where he shall go, and God tells him to go to Hebron (2 Samuel 2:1). There, the people of Judah anoint David as king over Judah.

At this point, Judah and Israel are not the same, though elsewhere in the Old Testament the terms are used synonymously. Judah is the smaller section of land to the south. It includes the territory allotted to the tribe of Judah, but also a small region in the northeast occupied by the tribe of Benjamin, and an area toward the southwest occupied by the tribe of Simeon. The main cities of Judah were Bethlehem and Hebron [see Author’s Note 2]. Therefore, David is not yet king over all Israel, but is now recognized as king over this “house” (2:4), and he rules as king in Hebron for 7½ years.

In the meantime, Saul’s former army commander Abner has taken Saul’s living son, Ishbosheth [see Author’s Note 3], and placed him as king over Israel. These two families — the family of Saul and the family of David — enter into a war, which 2 Samuel 3:1 tersely and appropriately describes as “long.”

Another family feud takes place between Abner, son of Ner, and the sons of Zeruiah: Joab, Abishai, and Asahel. Abishai was the one who went with David during David’s second opportunity to harm Saul, in 1 Samuel 26, and Joab will be David’s commander when David rules over all Israel. After a contest between 12 of Saul’s servants and 12 of David’s (2 Samuel 2:12–17), Abner kills Asahel with so much force that the blunt end of his spear goes through Asahel’s back (2:23).

Asahel’s two brothers then pursue Abner, who eventually calls out to Joab, “Is the sword to keep devouring forever?” (2 Samuel 2:26). This rhetorical question, in this context, is meant to suggest that they should stop fighting. But David uses those same words in 2 Samuel 11 as he warns Joab not to interfere after David commands the death of Uriah. Joab stops his pursuit of Abner — for the time being — but the fighting continues between Abner and the sons of Zeruiah.

The next event that occurs is that Abner — the one who placed Saul’s son Ishbosheth on the throne — is described as “making himself strong in the house of Saul” (2 Samuel 3:6). Apparently, the way Abner is doing this is by sleeping with Saul’s former concubine, Rizpah [see Author’s Note 4]. Ishbosheth, perhaps threatened by Abner’s growing strength, confronts him. Abner is so offended that he switches his loyalty to David, making a vow that he will help accomplish what God has sworn to David, “to transfer the kingdom from the house of Saul, and set up the throne of David over Israel and over Judah, from Dan to Beer-sheba” (3:10).

Abner then makes a covenant with David, the terms of which are that Abner will return Michal — Saul’s daughter, and David’s first wife — back to David. When Michal gets returned to David in 3:14–16, we know nothing about how she feels; we will have to wait until 2 Samuel 6 to hear her voice. We are, however, given some insight about the emotions surrounding this event when we read that her husband Paltiel follows Michal all the way, weeping, and only leaves when Abner tells him to do so.

After Michal’s return, Abner goes to rally Israel to David. But when Abner returns, Joab kills Abner in revenge for Abner’s murder of Joab’s brother Asahel. When David hears what Joab has done, he publicly professes his own innocence and places a curse on Joab, saying in 3:29, “May the guilt fall on the head of Joab, and on all his father’s house; and may the house of Joab never be without one who has a discharge, or who is leprous, or who holds a spindle, or who falls by the sword, or who lacks food!” Additionally, David tells everyone to mourn for Abner, and once again leads the people in a public lament. If the northern tribes had been suspicious about the fact that their powerful leaders were dying while David and his men were still safe, the result of David’s lamentation was that “all the people and all Israel understood that day that the king had no part in the killing of Abner son of Ner” (3:37).

Though Ishbosheth was estranged from Abner, he is afraid when he hears about Abner’s death. It turns out that his fear is not unfounded, as he is killed by two men who were the captains of his raiding bands, Baanah and Rechab (2 Samuel 4:5–7). After they kill Ishbosheth, they behead him and bring his head to David (4:8). In response, David reminds Baanah and Rechab what he did to the Amalekite who told him about Saul’s death, saying in 4:11, “How much more then, when wicked men have killed a righteous man on his bed in his own house! And now shall I not require his blood at your hand, and destroy you from the earth?” Those questions are rhetorical; David’s servants kill Baanah and Rechab, and then bury Ishbosheth’s head in the tomb of Abner (4:12).

This section of the text tells us of the death of most of Saul’s family, with the exceptions of his daughter Michal and his grandson — Jonathan’s son — Mephibosheth. A single verse (4:4) tells us that Mephibosheth is “crippled in his feet.” Later we will read more about both of these remaining descendants of Saul. In contrast to Saul’s family, which is dying out, David’s family is growing. In 7 years, he has had six sons (2 Samuel 3:2–5) [see Author’s Note 5]. As the mighty have fallen, another mighty one is ascending.

Hebron was where David distributed spoils from the victory over the Amalekites in 1 Samuel 30:31; Abigail and Ahinoam both came from homes in the area of Hebron.

This name literally means “man of shame,” and is often substituted for “Ishbaal,” which means “man of Baal.” Baal, of course, was the god of the Canaanites who proved to be such a temptation to the Israelites, so the substitution of “bosheth,” or “shame,” for “Baal” is a way that the text can denigrate this foreign god and those who seek to follow him.

In the ancient world, this was a way for someone to claim authority over another’s throne. In 2 Samuel 16:21–22, to be discussed in the Lectio for week 11, Absalom sleeps with David’s concubines to symbolize his coup over his father. Similarly, one possible reason that Solomon has his brother Adonijah killed in 1 Kings 2 is that Adonijah requests to be married to Abishag, a woman whose role is to keep David warm in bed — though the text is careful to make clear that David “did not know her sexually” (1 Kings 1:4). There is no information in the biblical text, however, as to how this practice would have affected the women involved.

David also has a daughter, Tamar, but she won’t be introduced until 2 Samuel 13.