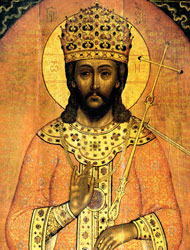 Trust. For some the word may seem antiquated. They may say, “Trust [in others] is for the naïve, the foolish, the weak. Trust will only lead to disappointment and hurt. Suspicion and autonomy are for the strong. The only one you can trust is yourself.”

But hear the word of the LORD: “For thus said the Lord GOD, the Holy One of Israel: In returning and rest you shall be saved; in quietness and in trust shall be your strength. But you refused.” (Isaiah 30:15) Not only does this verse sum up the lesson for our reading this week, but one could make a case that it summarizes the message of the book of Isaiah. We have already seen that the choice between fear and faith was the primary issue in Isaiah 7–12, which we will revisit in Chapters 36–39. Here in this week’s passage the fundamental challenge for Israel will be to trust in God.

Although Isaiah 28:1 begins with a reference to Ephraim (the Northern Kingdom), Isaiah 28–31 is largely set in the context of the events leading up to Sennacherib’s campaign against Jerusalem in 701 and aimed specifically at the political leadership in Jerusalem. Earlier, in 7:4–9, Isaiah assured King Ahaz that he need not fear Ephraim during the Syro-Ephraimite war of 734. Isaiah reminds the people of Jerusalem that human powers fade and wither, and it is only Yahweh’s glory that lasts.

In 28:7–29, Isaiah indicts Jerusalem’s priests, its prophets, and the rest of its leadership. Israel’s religious leaders lack knowledge, insight, vision, and judgment, and therefore stumble about in a hazy stupor. When they listen to the word of the LORD, preached by Isaiah, they mock his speech, saying, “tsav letsav, tsav lestav; qav leqav, qav leqav” (28:10, CEB).

While some English versions attempt to translate this verse into intelligible speech, the point of the passage is that it is precisely the opposite. That is, these drunken priests and prophets mock the wisdom of Isaiah’s preaching by impersonating him saying, “Blah, blah, blah, blah, blah!” Yahweh responds by sending foreign conquerors who will rule over them in a language they do not know so that from the lips of their foreign captors all they will hear is, “tsav letsav, tsav letsav; qav leqav, qav leqav.”

Recall that in Isaiah 6:9–10 Isaiah was commissioned to make the mind of the people dull. Here we have an instance of the clear preaching of God’s word doing just that, and not because Isaiah’s words are incomprehensible. Because the people mock God’s word, Yahweh’s judgment is to use the people’s own words to condemn them.

Isaiah 29:9–12 continues this theme of Israel’s inebriation and inability to comprehend. Israel’s leaders, its prophets, and its seers are alcoholics, unable to gain sobriety, and they are illiterate, unable to gain knowledge. Isaiah 30:9–14 describes Israel as rebellious children who refuse to hear Yahweh’s instruction (compare Isaiah 1:2, 5, 28). They request of their prophets, “Do not prophesy to us what is right; speak to us smooth things, prophesy illusions; … let us hear no more about the Holy One of Israel” (30:10–11). Because of these reasons, the leaders and the people cannot even understand the vision of Yahweh, God’s very own word.

Perhaps you know someone who is addicted to alcohol or drugs, and cannot remain sober. Israel is in a similar situation of its own doing. So now God’s vision for Israel is sealed from those who can read and is revealed to those who cannot comprehend. God’s people are in dire need for the word of God to be revealed and their minds to be unclouded. Thankfully, in 29:18 we hear of a future day when “the deaf shall hear the words of a scroll, and out of their gloom and darkness the eyes of the blind shall see.” Isaiah’s last word is not judgment but gospel.

Israel’s leaders, seers, and prophets are giving the people bad political and theological counsel. They are encouraging the people to seek the military aid of the Egyptians to rescue them from the Assyrian threat. To understand why Israel would seek foreign military assistance, you have to remember that the mighty Assyrian empire dwarfed Israel. It was only through coalition-building with foreign nations that Israel in the past had been able to repel Assyrian invasion. For example, in 853 B.C.E. the Israelite king Ahab joined forces with 11 other nations, including Egypt, and successfully defeated the Assyrian king Shalmaneser III at the battle of Qarqar.

Isaiah 30:1–7 and 31:1–9 demonstrate Isaiah’s attempts to dissuade Israel’s leaders from brokering alliances with Egypt and Pharaoh. The word for “plan” in 30:1 can also be translated “counsel” or “wisdom.” In this case, their wisdom and plans ignore or violate the wisdom and plans of Yahweh. Egypt is impotent to protect Israel (30:3, 6–7; 31:1–3) against not only the Assyrians, but, more importantly, Yahweh’s heavenly army. Earlier the mention of a “covenant of death” (28:15, 18) provides a spiritual assessment of these alliances made with Egypt. Isaiah wants the people to realize that “deals with the devil” are bankrupt and illusory. They are made with a desire to preserve one’s life and livelihood, yet in the end that is exactly what they lose in the transaction.

Consistently throughout the book, Isaiah reminds Israel that Yahweh is the LORD of hosts and that Israel’s proper response to God’s kingship is one of trust. In the original Hebrew, the title “LORD of hosts” occurs 58 times within the book of Isaiah; the word “hosts” means “armies” or “forces.” This title appears in both 31:4 and 31:5, and here Yahweh is compared to a lion guarding its prey or a bird brooding over its nest. Because of God’s commitment to Zion (compare 2 Samuel 7:10; Psalm 46, 48), Yahweh “will protect Jerusalem; he will protect and deliver it, he will spare and rescue it” (Isaiah 31:5).

Yet in 29:1–8 Isaiah speaks a woe oracle concerning Jerusalem, here named Ariel. In 29:1–4, Isaiah describes Yahweh as “distressing,” “encamping against,” and “besieging” Ariel. In 29:5–8, judgment is then directed against the nations that fight against Ariel, and Yahweh’s warfare is directed against Jerusalem’s opponents. So what are we to make of this? Is God for or against his people? What we see is that Yahweh as the LORD of hosts “will rise against the house of the evildoers, and against the helpers of those who work iniquity,” (Isaiah 31:2), whether they come from Israel or the nations.

So when faced with bad choices all around, what is Israel to do? Wait. Trust in God’s plan. Isaiah already announced that God’s plan was to destroy Assyria (14:24–26). So Isaiah 30:15 exhorts the people, “In returning and rest you shall be saved; in quietness and in trust shall be your strength,” and 30:18 announces, “Therefore the LORD waits to be gracious to you; therefore he will rise up to show mercy to you. For the LORD is a God of justice; blessed are all those who wait for him” (Isaiah 30:18).

Trust in Yahweh as King!

Whereas earlier in Isaiah much attention was given to the hope for a messiah, a Davidic ruler who would establish God’s reign of justice on earth (compare 9:1–7; 11:1–9), concern for a Messiah has largely dropped out of sight in the book. Recall in 9:6–7 that Isaiah prophesies a son of David will be born who will establish an eternal kingdom of peace, justice, and righteousness. Isaiah 11:1–2 speaks of a shoot of Jesse who will possess the spirit of the LORD and rule over a restored creation. While both passages mention a Davidic monarchy, the emphasis of both texts is on the nature of the kingdom rather than on the agent. This is evident in other visions of God’s future kingdom, such as Isaiah 2:1–4, where God’s righteous rule is described and no messianic agent is named.

In Isaiah 32–33, we return to the theme of kingship, but here there is no mention of a Davidic messiah and the focus is solely on Yahweh as king. Isaiah 32:1 breaks from the “woe” pattern we have seen through these chapters and instead begins with the exclamation “see/behold.” Clearly a transition is taking place. An unidentified king is mentioned in 32:1 who will reign in righteousness, and alongside him princes will carry out justice.

What follows in 32:2–8 is a reversal of the corrupt leadership practices we have seen in Isaiah 28–31, which described Israel as dominated by the foolish, inebriated, blind, and deaf. We saw how the judgment of Isaiah 6:9–10 continued to afflict Israel because of its stubbornness. Now in Chapter 32, because the king and princes reign in righteousness and justice, this judgment is reversed, and in 32:2–8 we read of how the people will regain sight, hearing, and good judgment, and once more stand firm in faith.

In Chapter 33, we are again introduced to this king, and in no uncertain terms this king is none other than God. The emphasis is on the nature of God’s kingdom. According to 33:5–6 it is one of justice, righteousness, stability, salvation, wisdom, knowledge, and the fear of the LORD. In Isaiah 33:17–22, the identity of the king is finally clearly revealed. Isaiah 33:17 follows up on 32:1 by speaking of how we will see the king in his beauty.

While other words for “beauty” may be taken more metaphorically, the word for “beauty” in this verse specifically refers to physical beauty. It is the same word used to describe the renowned beauty of Queen Vashti in the book of Esther (1:11). In this day, no longer will people’s eyes be blinded or dulled, and they will be able to clearly see the king. And what does the king look like? He’s gorgeous! Who is the king? Yahweh, the Holy One of Israel. Isaiah 33:22 definitively identifies the king: “For the LORD is our judge, the LORD is our ruler, the LORD is our king; he will save us.” Remember Isaiah’s name means “Yahweh saves.”

The Old Testament possesses an ambivalent attitude toward human kingship. On the one hand, Israel is taught “the LORD will be king forever!” (Exodus 15:18, New Century Version), and that human kingship is displeasing to God and harmful for the people (1 Samuel 8:4–18). Yet other Scripture indicates that Israel desperately needs a king (Judges 21:25), and clearly God chooses to establish an eternal Davidic monarchy (2 Samuel 7:8–16). It is interesting to note that at the very inception of the monarchy God was reluctant (1 Samuel 8:19–22). What we will see in the book of Isaiah is a reminder that the Davidic monarchy is a means, not an end. While the Davidic messiah is not displaced in the book, his role is relativized in light of Yahweh’s role as king.

The practical lesson for us is this: God will establish his kingdom of justice and righteousness through whatever means he chooses. Often he will use human agents or institutions to do so, but sometimes he may not.