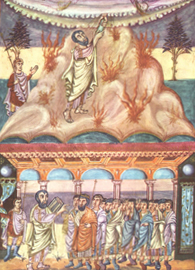 With this Lectio, we move back from narrative to law. In fact, the title of the book, Deuteronomy, means in Greek “Second Law.” It often gets referred to in rabbinic writings as Mishneh Torah, or the repetition of the Torah. That title is a good description of its contents, because Deuteronomy contains a recapitulation of the teachings from Genesis to Numbers.

The instructions within this chapter are some of the most basic for Israel, and they express the main theme of the entire book of Deuteronomy: that God demands their ardent and exclusive loyalty. As Deuteronomy 6:5 says, the Israelites are to love the LORD their God with all their hearts, souls, and might.

Within the rest of the book, exclusive devotion to God gets expressed in ways so vehement that they might seem disturbing: Israelites who worship other gods are to be killed, native Canaanites are to be destroyed so that Israel will not be tempted by their gods. In fact, Deuteronomy warns that worship of any other god will lead to Israel’s own destruction and exile from the land [see Author’s Note 1]. But these commands about faithfulness to God need to be read within the context of God’s covenant with Israel, and God’s love for Israel. 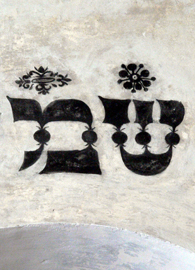 EnlargeHear and Obey: The Greatest Commandment

In 6:3, Moses commands Israel, “Hear.” The Hebrew word shemaʿ is repeated in following verse, and in fact, the entirety of Deuteronomy 6:4–9 is a piece of liturgy known as The Shema, the title taken from the first word. However, the word “hear” can and is also translated as “obey.” So “hear” has the sense not only of something auditory: hear, listen; but also of something motivational: obey, do, act.

Deuteronomy 6:4–9 is one of the most significant sections of the entire Old Testament. For our Lectio on Leviticus 19, we noted that Jesus’ “second greatest commandment” came from Leviticus 19:18. His first, and greatest, commandment is taken from Deuteronomy 6:5: love God with all your heart, soul, and might [see Author’s Note 2].

In many ways, the entirety of The Shema is an elaboration of the very first commandment: there are to be no other gods besides the LORD. Deuteronomy 6:4 in Hebrew reads: yhwh ʾeloheinu yhwh ʾechad, or, literally, “the LORD our God, the LORD one.” Rarely is the verb “to be” in its present-tense, “is,” used in Hebrew, so the reader or listener has to supply it.

In this verse, though, it could be added in a number of ways, with slightly different meanings:

I personally believe that the different possibilities are intentional, that Deuteronomy 6:4 was worded as it was because the implications are all part of worshipping and following this incomparable God.

After commanding Israel to hear — and obey — and after identifying the LORD, the next command is to love. Love is not simply a feeling or an emotional attachment, but it expresses itself in action, as we saw with the commands to love the neighbor and the alien in Leviticus 19. In other words, Israel is supposed to love God by loving and loyal actions to God and others. Still, Deuteronomy is the first book in the Torah to speak about loving God. The previous books emphasize reverence, often expressed through the command to fear God. Deuteronomy includes “the fear of the LORD” (compare 6:2), but includes love as an attitude that should motivate Israel to obey.

So, this text asks Israel to love God with its thoughts, its feelings, its life, its existence — a lot. Of course, each one of these is modified with the description “all.” Since the LORD, alone, is God, Israel is to love God with undivided devotion — with all it has and all it is.

From the soaring commandment to love, the text moves into practical details. These words are to be kept in their hearts (again, in their thoughts, intentions, and feelings). They are to be recited — literally “repeated” to their children, spoken about at home and when away, when they lie down and when they rise up (Deuteronomy 6:7).

From this verse, Jews took the daily practice of reciting Deuteronomy 6:4–9 every morning when they woke up, and every evening before they went to bed. The practicalities continue in 6:8–9: “bind them as a sign on your hand, fix them as an emblem on your forehead, and write them on the doorposts of your house and on your gates.” Certain Jewish groups, including probably the Sadducees, took Verse 8 as figurative, suggesting that one should always be preoccupied with the Torah as if they were on one’s hand or before one’s eyes.

The Pharisees, however, took the text literally, that the words should be inscribed on a scroll that would be placed on the forehead and on one’s hand or arm. Hence the objects known as tefillin, or “phylacteries” — boxes containing words from Exodus 13:1–16, and Deuteronomy 6:4–9 and 11:13–21, with black straps attached to them. The straps are so that the boxes can be wrapped around one’s arm and fit snugly on one’s forehead. The provision in Verse 9 — to write the commands on your doorposts and gates — gets literal expression as a mezuzah, a small case affixed on the doorposts of a house in which is placed a scroll of parchment with the words of The Shema written on it, along with its companion passage, Deuteronomy 11:13–21.

The positive reminders are followed in 6:10–15 with warnings against forgetting God. Ironically, it is the blessings and prosperity of the Promised Land that may cause people to forget God. Many of us know, indeed have experienced, that it can be easier to remember God in times of struggle, when we are aware of our need for God, than it is during times of comfort.

In other words, it can be easier to rely on God in the desert than in a land flowing with milk and honey. Even the admonition not to forget God has a reminder attached to it: God is the one “who brought you out of the land of Egypt, out of the house of slavery” (Deuteronomy 6:12). This passage revisits the description of God as jealous.

We have read many times this summer about God’s anger burning, and Moses reminds this new generation that God’s anger could be kindled against them (6:15). There is also a reference to the time in the past when the Israelites tested God at Massah (Exodus 17:1–7). The juxtaposition of testing God in 6:16 with the encouragement to obey God’s commandments in Deuteronomy 6:16 suggests that testing God is associated with disobedience.

And once again we see that the commandments are connected with promises and motivations: “Do what is right and good in the sight of the LORD, so that it may go well with you” (Deuteronomy 6:18). Obedience to God’s commandments at this point seems almost a precursor for occupying the land, “so that you may go in and occupy the good land that the LORD swore to your ancestors to give you, thrusting out all your enemies from before you, as the LORD has promised” (Deuteronomy 6:18–19).

As the chapter ends, it returns to the theme of Deuteronomy 6:7, which emphasized teaching children about God’s instructions. Here, the assumption is that the children will ask about the commandments (6:20), but the answer is to go beyond the value of the individual laws to explain the overall reasons for — and value of — obeying the law overall (6:21–25). It is not clear if the explanation is supposed to be exactly what Moses said, to be recited word for word. But the answer assumes that the parents should know it well enough to answer when they are asked.

Despite the provisions to remember, despite the practical ways to be reminded, we still might forget, especially when the reminders themselves become rote. I have a mezuzah on the doorpost of my office at Seattle Pacific University. One time, a colleague was standing in my doorway talking with me about something else, and she exclaimed, “How beautiful!” My answer — unfortunately — was, “What?”

I had forgotten that it was there. The physical reminder that I had nailed to the entrance to my office was something I had gotten too familiar with, something I walked by without touching, without saying the words of The Shema, without remembering. I often get frustrated with how quickly the Israelites seem to forget God, and then I realize that I am their spiritual descendant. Even reminders apparently do not always help me remember. But in the hearing of the words and the commandments, in talking about them with the family of faith, I am encouraged to keep hearing, obeying, loving, and remembering the God with whom I have a relationship of love.

The books of Deuteronomy through 2 Kings have been referred to as a collection known as “The Deuteronomistic History,” because Israel’s exile is explained in terms of the laws laid out in Deuteronomy. That is, Deuteronomy warned against following other gods, and it is because Israel again and again follows other gods throughout the book of Kings that they are exiled from the land.

Note that Jesus adds soul/mind — a division of thought not present in Hebrew.

In the ancient near east, gods were sometimes referred to by their name and place of worship. For example, a treaty between the Egyptians and Hittites refers both to “Re the lord of the sky” and “Re of the town of Arinna.” In some ancient Hebrew inscriptions we find references to both “YHWH of Samaria” and “YHWH of Teman.”

The concern was that this manner of speech might imply that there were several different deities with the same name — that is, that there was more than one Re, or more than one YHWH. All of these explanations — and varying translations — would relate to Christian understandings of the triune God, who is to be the exclusive authority in a Christian’s life, who though consisting of three persons is united in essence, and who is referred to as Father, Son, and Holy Spirit but is still one God.