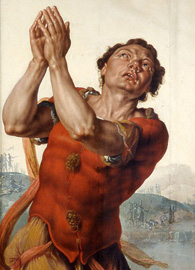 So far in the book of Judges, the pattern or cycle has been clearly established:

The high point of triumph and success in the victory song of Deborah and Barak (Chapter 5) transitions to the strikingly low point of Israel at the hands of the Midianites. In this particular instance, the Midianites have devised a clever plan to frustrate the Israelites’ attempts to flourish in their own land economically.

I liken their situation to my own challenges when, over the period of the night, my three children end up in my bed one by one until all I have left is a tiny corner of bed, no covers, and I am holding on to the edge tightly lest I end up on the floor! (All the while the kids are peacefully sprawled out in the middle of the bed.)

So the Midianites swarmed the Israelite’s land like a horde of locusts, and they overran it such that the Israelites had to hide out in caves and mountain areas (6:2). This is the bleak setting for the “call of Gideon.”

The Call of Gideon

What is Gideon doing when YHWH comes to him and commissions him to lead the Israelite people against the cruel Midianite oppressors? Is he sharpening his sword collection? Is he pumping iron in the local Gold’s Gym? Is he brushing up on Sun Tsu’s The Art of War?

No. He was at home. Threshing wheat. In a winepress.

Okay. Threshing wheat is a relatively common activity, but why in a winepress? He was threshing wheat in a winepress in order to hide the wheat from the Midianites. It would be the equivalent of trying to toss pizza dough while crouched inside your fireplace. Basically, we encounter Gideon in a sad, pathetic state, desperate and miserable (6:11).

Thus, it may be with a touch of sarcasm that the LORD begins with this statement: “Mighty hero, the LORD is with you!” (New Living Translation, 6:12). (Can you imagine Gideon looking around …Who, me?)  Gideon’s initial responses are frustration (6:13) and resistance: My family is the weakest in this tribe and I am the weakest in my own family (6:15)! This reminds me a bit of when God commissions Moses in Exodus 3 and Moses’ first reaction is, Who am I to confront the mighty king of Egypt (Exodus 3:11)?

In fact, Gideon acts a lot like Moses in this dialogue with God. Gideon comes across as a wimp and a doubter. Like Moses (Exodus 4:1–17), Gideon needs a sign from God that everything will be all right (Judges 6:17–21). Later, he demands two more signs from God to provide reassurance that God’s plan will work (6:37–40).

Despite parallels with the character of Moses, then, Gideon comes across as more fearful and doubting, even though he has come face-to-face with the Almighty God (6:22–23). Nevertheless, despite much initial reluctance, he accepts his role as deliverer of the people.

The first task for Gideon is to smash a local idol altar dedicated to a god named Baal. It just so happens, though, that that pagan altar belongs to Gideon’s own father! Further confirming his spinelessness, he decides to destroy it at night so no one would know it was he who had done it (6:27). Some “mighty hero”! Eventually Gideon is “outed” as the “smasher” (which is actually what his name means), but his father, Joash, comes to his defense.

Despite Gideon’s timidity and doubt, God clothes Gideon with his spirit (6:34), giving divine power and blessing to his leadership. Gideon, apparently showing a new sense of confidence, is able to bring together 32,000 troops to fight the Midianites. Not bad, but later we learn that the enemy is 135,000 soldiers strong (8:10) — more than four times the size of Israel’s force!

What does the LORD do? Does he call forth angels to fight alongside Israel? Does he send tanks and Apache helicopters? No, he tells Gideon to send some of his soldiers back home. Otherwise, if the Israelites did win the battle (!), they might delude themselves into thinking it was by their own strength. Through a unique process of elimination, the Israelite army force was reduced to three hundred (7:7). On that count, for every one Israelite soldier, there were 450 Midianite soldiers.

Now it is quite obvious that with these numbers you don’t just “storm the gates.” God commands them to carry out a “shock and awe” approach that involves noisy trumpets, smashing of pots, and torches in the night — and it works (7:21)! The Midianites freak out, run around in panic, and end up killing each other in all the confusion. Those who live run away.

At this point, what is in Gideon’s mind? One would expect he would be full of admiration and praise for the LORD, as everything has worked according to (God’s) plan despite the ridiculous odds. However, Gideon’s first instinct is to call for more support — he summons more troops, presumably among those he was told to send home (7:23).

Here we begin to see a change in Gideon’s character. At first he had no confidence. Then, ever so briefly, he shows some confidence in the LORD, who commissioned him. At this point we start to see pride in his own wisdom and strength. The wimpy Dr. Jekyll is changing into the arrogant Mr. Hyde.

The Downfall of Gideon

By the time we get to Chapter 8, Gideon is in hot pursuit of the fleeing leaders of Midian: Zebah and Zalmunna (8:1–5). When he and his army stop off at an allied village and ask for provisions, the locals rebuff him: Why don’t we wait and give you food and drink after you have captured Zebah and Zalmunna (8:6)?

Gideon gets angry, and when he has finally gotten to these Midianite kings and “taken care of them,” he seeks out revenge on that village by torturing and killing their men (8:16–17). When we first met Gideon, calling him “mighty” was ridiculously ironic. Now it becomes disturbingly accurate.

It gets worse. While, at the beginning of this story, Gideon accepts God’s call to destroy the altar of the pagan god Baal, we see a strange reversal of this act when he asks each of his soldiers to give to him some plunder from their recent skirmish. Based on the figures given in 8:26, this would amount to about 3,400 earrings! What does he do with them?

We are told that he makes them into an “ephod” (8:27), which is a special piece of clothing used in religious worship. We are clearly told that Israel “prostituted” herself to it, which is metaphorical language for turning away from her “husband” (YHWH) and turning to another. That is, idolatry is viewed as an adulterous relationship, because Israel and her LORD have an exclusive commitment to each other. Thus, Gideon’s act here leads the people into idolatry.

However, Gideon’s own actions seem to suggest that he was double-minded. In Deuteronomy 17:14–20, we see that back before Israel even entered Canaan, YHWH had given a set of regulations in case Israel wanted a king someday.

Indeed, again with a sense of irony, Gideon’s son, who is highlighted in Chapter 9 is named Abimelech, which means “My father is king.” While he may have been named this in honor of YHWH the “king,” the life of his father would testify that Gideon in fact acted like he was the king of Israel.

Lessons from the Life of Gideon

When we read the book of Judges, we can see the stories at the micro or macro level. On the micro level, we can look at each story and learn from the virtues and vices of any given character. Deborah, for example, shows reverence, wisdom, and trust in the LORD.

Gideon, on the other hand, is more double-minded. He could be remembered for some of his better moments (8:33–35), but by and large he demonstrated the key ingredients of Israel’s sinful recipe: pride, doubt, idolatry, and a mind that is quick to forget what the LORD has done.

We should also be mindful of the macro level, or the “big picture” of the story of the judges. We see the up-and-down life of Israel under this period, where they sin and repent repeatedly, and God is patient and loving enough to continue to send “saviors” (judges) from among them and promise his presence and power.

But, as we move from one judge to the next, the cycle is spiraling out of control. The system works only when you have a good judge (such as Othniel, Ehud, or Deborah). What happens when the quality of the judge diminishes? Like taking a certain medicine every day, there is a law of diminishing return. Israel is becoming numb to the effects of the judges, and the drug itself (the judge) is becoming contaminated! That leads us into the last cycle — the age of Samson. Hold on to your seats, you’re in for a bumpy ride!