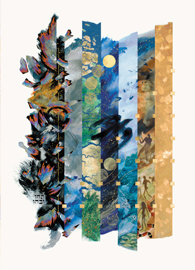 Perhaps that is why you cannot help but be taken aback by noticing two stories in Genesis that seem to feature creation: Story 1 (Genesis 1:1–2:3) and Story 2 (Genesis 2:4–25). You no doubt have heard these two narratives referred to as a single account, which then requires a bit of harmonization [see Author’s Note 1]. But harmonizing compels one to ask: If harmonization is necessary, why didn’t the biblical writers save us the trouble?

Actually, a speed-read of Genesis helps us to pose that question differently. Speed-reading reveals a formula which structures the whole book. The formula is quite simple. You find it either as “this is the story of” or “this is the genealogy of,” depending on whether it is followed by a narrative or a genealogy [see Author’s Note 2].

You also discover that the formula introduces rather than summarizes. That in turn makes you realize that only Genesis 1:1–2:3 is not introduced by the formula. It appears that Genesis 1:1–2:3 has been arranged to be read from a different perspective than all the other parts of Genesis governed by the formula. Thus, you may justifiably regard Genesis 1:1–2:3 as the creation story proper, whereas the so-called second creation story (Genesis 2:4–25) is the first episode in which God engages the created order. You and I might be bothered by the contradictory details, but those who put the book together were apparently unfazed.

Still, even when you accept this first narrative as the creation story proper, there’s another difficulty that immediately presents itself. The problem is that you just cannot seem to get your head around the text’s initial images. When I try to envision an earth that is formless and void, darkness that shrouds the deep, and God’s spirit (or a divine wind) hovering over the waters (1:2), my imagination fails. I can manage seeing an earth in my mind’s eye, but not one that has no shape or substance. If darkness surrounds the primordial waters, how can we see any image? And don’t you agree that the very idea of God’s spirit is something that is mysterious, invisible, and impossible to track?

But perhaps that is the point. The biblical image may be purposely designed to frustrate our efforts at imagination. It begins to dawn on us (no pun intended!) that you are confronting a picture of chaos. You know that chaos is not quite nothingness. There is something there. But there is no order, no structure or lines of demarcation, no defining boundaries, and certainly no familiarity. You and I simply cannot negotiate the images. Chaos frustrates, overwhelms, and even frightens us.

A Voice Out of the Void

Relative to these speaking patterns, another feature that you cannot help but notice is the manner in which the created order is designed to obey, so to speak, the divine commands. When God speaks, you observe either something coming into existence for the first time (1:3, 6, 11, 14, 16, 21, 25, 27) or something that already exists contributing further to the created order at divine instigation (1:9, 11–12, 20, 24). If we are inclined to doubt this “hard wiring” of the created order, the narration underscores the results of God’s continuous speaking with the phrase: “and it was so” (1:7, 9, 11, 15, 24, 30).

You also don’t have to be an expert to see how many times the accent is on the fact that God’s creation is good (1:4, 10, 12, 18, 21, 25, 31). You would be right to surmise that such repetition is extremely important, especially since the totality of creation — the material universe in all aspects, vegetation, the animal world, and humanity — is pronounced good and, ultimately, very good (1:31). A basically, intrinsically, substantially good created order will be amenable to ultimate divine reconciliation, restoration, and redemption should something go wrong.

Then again, you cannot fail to appreciate the importance of light in this profound story, for it is created before anything else (1:3). Then you realize that this light is not associated with any ordinary physical source of light. True, God separates the light from the darkness, and calls the former “day” and the latter “night.”

Yet there is no mention of the heavenly bodies with which we normally associate light until the fourth day (1:14–18). You almost have to conclude that this initial light is, in effect, the ground and presupposition for the whole created order. In this light (pun intended!), you begin to understand the role that light plays in other strategic biblical texts — for example, the Gospel of John [see Author’s Note 3]. This story explains why we live in light rather than darkness, a reality that is greater than any source of light as we normally understand it. Light has overcome darkness.

As well, keeping in mind the chaos depicted at the outset (1:1–2), you revel in the fact that, as the story unfolds, disorder is replaced by order. For example, you cannot miss the linear progression in which the narrative moves easily and naturally from day one to day six and then is capped off by a final seventh day where God rests, not from fatigue but as a kind of joyful satisfaction (1:3–2:3).

Equally, order is prominent when you observe the symmetry of the days of creation, for each of them consists of the same amount of time regardless of what was made on that particular day. Each day is made up of an evening and a morning (1:5, 8, 13, 19, 23, 31). Only the final day does not have this designation [see Author’s Note 4]. Order is emphasized in another feature of the narrative. On the first three days of creation, space is created and then subsequently filled, so to speak, with what God creates on the last three days, respectively [see Author’s Note 5]. We end up with a universe that is orderly, symmetrical, and predictable.

As wonderful as this all is, we get an extra jolt of delight involving humanity. For one thing, you get the idea that the whole of creation has been working toward a crescendo, as if the very last thing created has been the goal all along. Granted, our kind had to share day six with the other creatures (1:24–25), but we were the last thing that God made. This amounts to a certain pride of reverse order. This pride of place, if we can call it that, is no doubt why we humans have been put in charge over those who shared this day of creation with us (1:26).

Even more, our creation is unique in that we alone have been made in the image and likeness of God (1:26–27). Even though God is creator and we remain creatures, we nonetheless bear the very stamp of our maker.

What that means precisely will be spelled out throughout the rest of the biblical material, but everything that it must mean is without question an incomparable good. This item in the creation story may even say something about the famous prohibition against making images and likenesses of God, as expressed famously in the Ten Commandments but found throughout the Bible (Exodus 20:4). It is as though God is saying that making an image or likeness of the divine self is not only anti-God, but anti-human. That is because God has already provided the world with the divine image: human beings are that image.

We also have to be impressed that the divine image is expressed in human maleness and femaleness together. First we hear God in effect talking aloud: “Let us make humanity in our image, after our likeness.”

Then, when God creates humanity, the male and the female appear simultaneously: “male and female made He them” [see Author’s Note 6]. We would be wrong to conclude that this speaks to divine sexuality. But we would not be incorrect to see this as a stunning statement about the glorious role of humanity in the created order and the manner in which human maleness and femaleness reflects not only the fullness and wholeness of humanity, but in some sense the divine image itself.

Given this understanding of humanity, Christians will understand one day that the claim that God was in Christ accords fully with what the Bible teaches in its creation story.

Light in the Gospel of John

1. The Gospel assigns the role of “Word” (logos) to Christ, a role that is played out in His creative activity (1:1–2). In this Word was life itself, which in turn functions as the light which benefits all humanity (1:4, 9).

2. This Christ-Logos-Light has a cosmic function parallel to the light’s function in the Genesis creation story: dispelling and overcoming darkness (1:5). The words for light (phos) and darkness (skotia) in John are the same as used in the Greek version of the Old Testament creation story.

3. Light has a double meaning in this Gospel. On the one hand, it illuminates and thereby exposes all actions which are counter to it, especially human sin and evil. On the other hand, it is associated inevitably with Jesus the Christ (3:19, 20, 21). See a similar double meaning in 11:9–10.

4. Among the famous “I am” statements in John, one of them is Jesus’ assertion (8:12): “I am the light of the world; whoever follows me will not walk in darkness, but will have the light of life.” (See this combination of life and light in #1 above). Jesus makes a similar “I am” statement in 9:5.

6. Pointedly, in John’s resurrection story the episode begins when darkness prevails (20:1). In the unfolding account, the implication is clear that inevitably this darkness will be dispelled. Other Gospels also associate Jesus’ death with darkness (Matthew 27:45; Mark 15:33; Luke 23:44–45).

In some circles effort is put forward to see these “days” as something other than regular days. This is due to the pressure from scientific claims that the earth is several billion years old. By making the “days” indefinite periods of time, people try to make the creation story fit with scientific reality. Others take the days as regular days and Genesis 1 as a straightforward scientific or historical account. Both these views are problematic. The first fails because it does not attend to the plain meaning of the text. After all, each “day” has an evening and a morning, which one would expect. Eons or differing periods of time do not have “evenings” and “mornings” in the ordinary sense of the word. The second view fails in that it treats the text not as Scripture, but as a scientific or historical statement. Though the Bible in many places is historically or scientifically accurate, the primary purpose of Scripture transcends both science and history. Thus, the days of Genesis 1 should be seen as ordinary days, six of which are devoted by God to creation. But the text should not be construed as scientific or historical without remainder.

Genesis 1 and 2 use vocabulary quite creatively with respect to the creation of human beings. When God says, “Let us make man in our image . . . “ (1:26), the Hebrew word ‘adam is used. In this case, the term connotes humanity as a whole — it is generic in referring to men and women as a general human category. This is further illustrated when man/humanity is made “male and female” in the likeness of God (1:27). But when this same word — ‘adam — is used in Genesis 2 it is not generic. Instead, it refers to a specific male person, a single man capable of cultivating the garden the Lord has planted (2:5, 7–8). This Hebrew word means a male in particular or humanity in general, depending on context. The two meanings are more or less combined in Genesis 5:1–5.