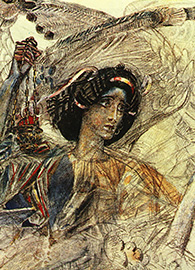 Several years ago a “reality” TV show aired called “Fear Factor,” in which contestants were challenged to overcome their fears through participating in aerial stunts, enduring vehicle crashes, or bathing in a tub of live worms. I always found the title of the show misleading, since, while these challenges may be revolting, I’ve never conceived of bugs, snakes, or skydives as my greatest fears. Like many people, I am most afraid of loneliness, public humiliation, failure, vulnerability, and the like.

In the Bible, the opposite of fear is faith. “Do not fear” is the command (if you consider it a command [see Author’s Note 1] that appears most frequently in the Bible, including in the words of Jesus. For many of us, our fears are not rationally based. For example, a rope-bridge extended one foot off the ground is, in itself, no more difficult to walk across than one elevated 300 feet off the ground. Our fears have to do with our perceptions of security. In this week’s readings, we’ll take a look at what it means to be people of faith (Chapters 7–8), but before we do so we’ll take a look at a parable (Chapter 5) and a heavenly vision (Chapter 6).

What starts off as a love song for Yahweh’s beloved in 5:1–2 quickly turns into an indictment of Jerusalem by 5:7. Isaiah 5:1–7 functions as a parable that, like other parables in the Bible, starts off innocently (compare 2 Samuel 12:1–10), but by its end reveals that Yahweh’s initial good intentions for the Northern Kingdom (Israel) and the Southern Kingdom (Judah) have resulted in rebellion.

Old Testament prophets have an affinity to poetry, since it can communicate truths in times of corruption, war, disaster, and violence that cannot be expressed through any other medium. It is the poet who can “nurture, nourish, and evoke a consciousness and perception alternative to the consciousness and perception to the dominant culture around us” [see Author’s Note 2].

Isaiah is no exception to this, and in 5:7 he uses wordplay to emphasize Israel’s great betrayal. Whereas Yahweh expects justice (miŝpāṭ) and righteousness (ṣĕdāqâ) from Jerusalem, instead Isaiah sees bloodshed (miśpāḥ) and hears outcries (ṣĕ‘āqâ) — the same characteristics of Sodom and Gomorrah (Genesis 18:21; 19:13). This parable in Isaiah 5:1–7 forms the basis of Jesus’ parable of the vineyard and wicked tenants (Matthew 21:33–46; Mark 12:1–12; Luke 20:9–19), which also speaks of betrayal.

Chapter 5 introduces the reader to much of the prophecy to follow. The description in 5:5–6 of the vineyard as a waste, its wall broken, no longer pruned or hoed, and “overgrown with briers and thorns” is the same fate that awaits Judah at the hands of the Assyrians (7:23–25). Isaiah 5:25 introduces the theme of Yahweh’s outstretched hand, which will feature prominently in Chapters 9–10. Isaiah 5:13 mentions exile for the first time in Isaiah, and, while the term is unspecific here, this theme will feature prominently later in the book. Isaiah exclaims “woe” (NIV) — an expression that carries negative and ominous overtones — six times in this chapter (5:8, 11, 18, 20–22), indicating to readers that they ought to heed the message.

The book of Isaiah is ordered not chronologically but thematically, and therefore the placement of Isaiah’s commissioning narrative serves the theological purposes of the book. In the near context, Isaiah’s preaching that will result in the dulling of minds (6:9–10) will be fulfilled in Chapters 7–8 in the person of Ahaz and the population of Jerusalem. In the far context, the judgment of exile announced in 6:11–13 will loom over Israel throughout Chapters 1–39, until it is reversed in Chapters 40–66.

Stories of persons experiencing visions of heaven, particularly those associated with near-death experiences, make bestseller lists, yet they rarely depict anything like the vision in Chapter 6. It appears Isaiah was mourning the death of Uzziah, who, though the king of Judah, lived his last years in seclusion and exclusion from the temple due to being stricken with leprosy (2 Chronicles 26:3–23).

Isaiah sees a heavenly court scene (compare 1 Kings 22:19–22), the way ancient Israelites, as well has their foreign neighbors, typically viewed heaven. They believed God was enthroned in a heavenly palace surrounded by court officials in the manner of their earthly kings. But access to the divine king Yahweh was not through the royal court. Rather, it was through the cult [see Author’s Note 3], the worship of God at the temple.

In Isaiah, the cult (the worship of Yahweh) is more important than the court (the Davidic monarchy). As I stated last week, the city of Zion (Jerusalem) is the main character of the book of Isaiah. While the messiah functioned as a representative of Yahweh on earth (Psalm 2; 8), in Isaiah the messiah’s role is to rebuild the temple (Isaiah 44:28–45:1). Why is the temple so important? Because it is the means by which humans commune with God. It is where heaven and earth meet. In Isaiah 6, it is unclear whether Isaiah has ascended to Yahweh’s heavenly court or God has descended into the earthly temple.

Temple worship is the demonstration that God’s kingdom has come on earth, and it serves as a foretaste of God’s eternal kingdom to come. Zion theology, as captured in Psalms 46 and 48, and other texts, assumes the following:

This theology is assumed by the author of Isaiah, and it is this drama surrounding Zion that unfolds in the book.

In the temple, Isaiah sees the true king — not Uzziah, Jotham, or Ahaz, but Yahweh the LORD of hosts. Israel’s God is fundamentally characterized by holiness, which in the Bible signifies primarily God’s otherness of being, but also his moral purity. In this vision, both aspects of God’s holiness are accounted for by virtue of the angels covering themselves, Isaiah’s confession, and God’s response of purification.

“Here I am, send me!” has often been quoted in commissioning services by pastors and missionaries. While I hope they would share Isaiah’s humility and obedience, I would desire that none of them share in his ministry. Isaiah 6:8–10 indicates that Isaiah is to go and heal no one. Should he gain a convert to Yahweh, he will have failed.

Now these words ought not to be taken in an absolute sense to characterize all of Isaiah’s ministry. Isaiah 6:9–13 functions primarily within the book of Isaiah to provide a theological assessment of Israel’s history prior to the return from exile. Certainly individuals within Israel may turn to Yahweh and be healed during this time (see, for example, Hezekiah in Chapters 36–38). Due to sin, Israel will be decimated as a nation, Jerusalem and Judah will be desolate, and only a remnant will survive. While all hope seems lost, such is not the case. Israel as a tree will be felled, yet its stump will remain, and that stump represents holy seed that carries the potential to begin afresh (6:13). Yet this much is clear: an era of judgment must precede the era of salvation.

Isaiah 7–8 is set in the historical context of what scholars refer to as the Syro-Ephraimite War (734–732 B.C.E.) described in 2 Kings 15:29–16:20. During this time, the Assyrian king, Tiglath-pileser III, began to move against the countries in the area, and so Syria and Israel (also named Ephraim) formed a coalition to oppose this common enemy. When the Southern Kingdom, Judah, refused to align its forces with them, they sought to coerce it through mounting a joint attack. Isaiah prophesies to the fearful King Ahaz that Syria (also known as Aram) and Ephraim will fall by their own accord. Within 65 years Ephraim was shattered.

Yet Ahaz fears. His heart is like a tree shaken by the wind (7:3). Ahaz is to trust that Yahweh will protect him and the city. Yet rather than trust God as the servant of the LORD, Ahaz turns to the king of Assyria for help: “I am your servant and your son. Come up, and rescue me from the hand of the king of Aram and from the hand of the king of Israel, who are attacking me” (2 Kings 16:7). Once again, Isaiah employs wordplay in his rebuke of Ahaz: “If you do not stand firm in faith (ta’ămînû), you shall not stand at all (tē’āmēnû)” (Isaiah 7:9).

Ahaz’s refusal to ask for a sign (Isaiah 7:12) — he cites the command not to “put the LORD to the test” (Exodus 17:2; Deuteronomy 6:16) — is to be viewed as a lack of faith. God wishes to assure Ahaz that he need not fear, so he gives him a sign anyway: “Look, the young woman is with child and shall bear a son, and shall name him Immanuel” (7:14). Much ink has been spilled in regard to the nature of this prophecy and the reference to a young woman.

The prophecy is well known, since Matthew cites Isaiah 7:14 in Matthew 1:22–23 to validate the virgin birth of Jesus. It is clear from Matthew’s gospel that Mary’s virgin status is not incidental to the story, nor to the Christian faith, as demonstrated in the Apostles’ Creed: “I believe in God … and in Jesus Christ, his only Son, our Lord, who was conceived by the Holy Spirit, born of the Virgin Mary ….”

Various translations choose “virgin” but others use “young woman.” The reason for this difference is that the Hebrew text uses the word ‘alma, which refers to a young woman of unspecified marital status or sexual experience, and the Septuagint (the earliest Greek translation of the Old Testament) uses the word parthenos, which describes a virgin. Matthew quotes the Greek text, and many English versions have followed this tradition by using “virgin” in Isaiah 7:14.

We will cover how Isaiah 7:14 prophesies of Christ in next week’s reading. This week we will focus on the role of this sign in Isaiah’s teaching on faith. Different options for who this pregnant woman is are as follows:

Whatever child first represented Immanuel, Isaiah does not specify.

In Chapter 7, Immanuel serves as a double-edged prophecy. In Isaiah 7:16, God reassures those of faith that the present military threat of the two kings (Rezin and Pekah) will be thwarted. But for the fearful, Isaiah 7:17–18 describes a future in which Jerusalem will be overrun by the Assyrians. In Chapter 8, Immanuel is mentioned twice (8:8, 10) and signifies God’s judgment and preservation of a remnant. In Isaiah 8:1–4, a son is born whose name serves as a sign of impending Assyrian conquest. Apparently this is an indictment of Ahaz’s request for Assyrian assistance. Whereas Ahaz desired a stream of military aid, Assyria will flood Judah with its military might and overrun Judah. The glimmer of hope amidst this judgment is that Judah will be flooded up to its neck. That is, a remnant will survive.

What does it mean to have faith? Just like the sign of Immanuel, holy fear and faith are double-edged. Faith is not to fear nothing. Rather it is to fear God alone. Fear is not the absence of faith, but rather the misplacement of it. Thus Isaiah exhorts us:

None but the LORD of hosts shall you account holy; give reverence to him alone, hold him alone in awe.” (Isaiah 8:13, New Jewish Publication Society).

This phrase ought not to be understood as a command but rather as a word of salvation. “Fear not” is a common rhetorical formula used in Ancient Near East cults or courts to reassure blessing to individuals.

By “cult” I mean the ceremonial aspects of a religion, not an extremist or unorthodox sect of a religion.
«Back