Selections From the Prophets Week 9

By Jeffrey Keuss
Professor of Christian Ministry, Theology, and Culture 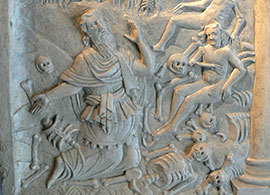 Therefore say to the house of Israel: Thus says the Lord GOD: It is not for your sake, O house of Israel, that I am about to act, but for the sake of my holy name, which you have profaned among the nations to which you came. I will sanctify my great name, which has been profaned among the nations, and which you have profaned among them; and the nations shall know that I am the LORD, says the Lord GOD, when through you I display my holiness before their eyes. I will take you from the nations, and gather you from all the countries, and bring you into your own land. I will sprinkle clean water upon you, and you shall be clean from all your uncleannesses, and from all your idols I will cleanse you. A new heart I will give you, and a new spirit I will put within you; and I will remove from your body the heart of stone and give you a heart of flesh. I will put my spirit within you, and make you follow my statutes and be careful to observe my ordinances. Then you shall live in the land which I gave to your ancestors, and you shall be my people, and I will be your God. (Ezekiel 36:22–28)

We live in a culture where people have a difficult time believing in anything that goes beyond the rational and scientific. As we heard in our reflections from the prophet Habakkuk, to have faith is so essential to life that it will change everything.

Yet some things are so difficult to get our mind around that we would rather turn our backs on them or dismiss them out of hand than risk having faith in them. After seeing the ghost of his father appear to him, Shakespeare’s Hamlet utters these words to the doubting Horatio:

There are more things in heaven and earth, Horatio
Than are dreamt of in your philosophy. [Author’s Note 1]

In many respects, Hamlet is offering us a synopsis of the prophet Ezekiel, as we shall see in this week’s selection from the Prophets, which speaks of a love that is beyond the reaches of our exaltation, joy, pain, heartbreak, and even death.

Wheels in the Sky

To put a sharper point on it, Ezekiel is a difficult prophet to understand at times. At one moment he is providing a crystal-clear historical account of life in the day-to-day world —

In the thirtieth year, in the fourth month, on the fifth day of the month, as I was among the exiles by the river Chebar (1:1) —

and in the next moment he is having visions of fantastical dimensions that include creatures that “had four faces, and each of them had four wings” (1:6):

These fantastical visions found in the prophecies of Ezekiel have befuddled and inspired generations both within faith communities and in secular culture. Comparisons have been made between the fantastical writings found in Ezekiel and speculative science fiction novelists such as Edgar Rice Burroughs and Arthur C. Clarke, or even rock bands such as Led Zeppelin and Journey, whose song “Wheel in the Sky” is a direct reference to Ezekiel 1.

And yet there is “logical structure with bizarre imagery” to be found in Ezekiel, and it is this logical structure that helps us to make sense of these “wheels in the sky” and other fantastical scenes. Rather than offering a systematic logic, Ezekiel equips the reader for an imaginative logic for which wonder and awe are rudimentary skills.

As we hear in Chapter 1:3, Ezekiel was a priest as well as a prophet, which helps to support the intimacy with which he understands the worship life of the people. As you read the book of Ezekiel, you will assume that he is living in Jerusalem, given the amount of time and precision of detail he affords Jerusalem, as opposed to Babylon, where many scholars place him.

As noted by Gerhard Von Rad, “the great interest with which [Ezekiel] followed the course of events in Jerusalem — so great that at times he even seems to be living with the people in the homeland rather than with those around him in Babylon — is something he has in common with exiles of all times.” [Author’s Note 3]

Scholars have often made comparisons between Jeremiah’s prophetic ministry, which we reflected on in our last Lectio, and the ministry of the prophet Ezekiel. Given the textual references in Ezekiel, we see that the book mirrors the timeline of Jeremiah, in that Ezekiel most certainly arrived in Babylon in 598 B.C., was called to be a prophet in 593 B.C., and continued his prophetic ministry until around 571 B.C.

The first-century historian, Josephus, commended the clear and balanced structure of Ezekiel as being a prophecy of “two books” [Author’s Note 4], with Chapters 1–39 offering oracles against Israel, and Chapters 40–48 offering visions leading to restoration. As we have seen thus far, this rhythm of calling down judgment on the sin that is apparent in the community and yet offering the promise of redemption and restoration, is a two-fold message found throughout the prophetic literature and readily apparent in Ezekiel.

Ezekiel often doubts his adequacy as a prophet (20:49), because the people do not seem to understand the visions he has been given by God to proclaim. He stands as a witness to the judgment of God in setting his “face” against Jerusalem (4:3), which resonates with Jesus’ resolve to “face” Jerusalem in Luke 9:51. He stands in for God before the people in justifying the destruction of Jerusalem to the point of annihilation (8:1-18; 9:5), but also gives intricate details for the restoration of lifeless bones (37:1–14) and the completely reconstructed temple (Chapters 40–48).

Ezekiel’s visions of restoration bear testimony to the fact that God is ultimately a redemptive and life-giving God:

Additionally, we see that worship is where we will encounter the living Lord, like water flowing in a torrent through the temple so completely that, as Ezekiel says, it is akin to

a river that I could not cross, for the water had risen; it was deep enough to swim in, a river that could not be crossed (47:5) —

to which the Lord asks, “Mortal, have you seen this?” (47:6) Indeed, who has seen such a thing and what does this mean for us? In Chapter 36, Ezekiel provides a manifesto of sorts that binds together these visions to the oldest of all God’s promises — a promise of redemptive love.

The Covenant of Love Binds It All

In Chapter 36, Ezekiel draws together the fantastical visions of swirling wheels, flaming chariots, and multi-headed flying creatures, with the down-and-dirty reality of a people lost in exile and enslavement. These powerful words, which we heard at the beginning of this week’s Lectio, echo God’s covenant with Abraham found in Genesis 12:

I will take you from the nations, and gather you from all the countries, and bring you into your own land. I will sprinkle clean water upon you, and you shall be clean from all your uncleannesses, and from all your idols I will cleanse you. A new heart (lēḇ) I will give you, and a new spirit (rûaḥ) I will put within you. I will remove from your body the heart of stone and give you a heart of flesh. I will put my spirit within you, and make you observe my ordinances. Then you shall live in the land which I gave to your ancestors, and you shall be my people, and I will be your God. (36:24–28)

Even though God’s name has been defiled through the exile of Israel among the nations (36:21) — to the point of becoming repugnant to many — the Lord has chosen to restore his holy name, and will do so only through the restoration of a people. These chosen people of God’s anointing are to be the embodiment of sanctifying holiness before the world, and, like the promise made to Abraham in Genesis 12, these newly cleansed and redeemed people will “live in the land which I gave to your ancestors, and you shall be my people, and I will be your God.”

Rûaḥ — With Heart and Spirit, From Stone to Flesh

Many read Ezekiel and comment on the madness of the visions — the preposterous claims of winged creatures flying in endless circles, dry bones leaping up alive, and flooding waters rushing through temples. But perhaps the most extravagant, preposterous claim of all is that the God whose name has been defiled, trodden upon, disgraced, and discarded has chosen from all the nations a people to participate in the redemption of the world. Moreover, it is through these fragile, broken, disappointing dry bones of a community that God will show a faith, hope, and love that exceeds the most fantastic, exotic vision and the most painful, harsh reality of this life.

These will not be walking zombies or merely skeletons arising from graves, animated bones without purpose. No, as God breathed his spirit (rûaḥ) upon creation at the beginning of all things, this same spirit will remove that which is inanimate stone and bring life where once there was death. As deep calls out to deep, the same breath that blows away stone will reside as a living spirit to animate and enliven. This much is clear: bones come together in Ezekiel 36, but they don’t live until the spirit is breathed on them. It is the Spirit of God that animates, and it will also be the Spirit that preserves, redeems, and restores.

As with many biblical texts, there is a wide diversity of opinion as to authorship and structural coherence. While Josephus affirmed a clean break and divided the book into two, other scholars have not been so uniform in their assertion of Ezekiel’s structure. For example, in 1924 Gustav Hölscher concluded that only 144 of Ezekiel’s 1,273 verses were attributable to the prophet, with the remainder attributable to another post-exilic priest. See Julie Galambush, “Ezekiel,” in The Oxford Bible Commentary, ed. John Barton and John Muddiman (Oxford University Press, 2001), p. 534.