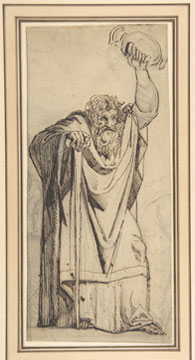 In this section, Jeremiah moves beyond speaking words from the LORD to enacting messages from God. These examples present the same message that Jeremiah has proclaimed from the outset. That is, Judah has no shape, no purpose apart from the LORD. Hence, it is foolish to turn to idols rather than the LORD. Moreover, just as a pot can be irreparably broken, so God is going to shatter Judah. Jeremiah presents Judah’s rejection of God as utter folly. Of course, Judah doesn’t see it that way. Nobody would tenaciously do something that they knew to be foolish, or perform actions destined to bring about their destruction. Nevertheless, Judah persistently turns from the LORD. This phenomenon reminds us that idolatry induces a sort of blindness in us, such that we cannot see the foolishness of our own actions.

The Potter and the Clay

The LORD instructs Jeremiah to visit the house of a potter. Jeremiah is told that at the potter’s house he will hear the word of the LORD. Before he hears, however, he sees. He watches the potter work with the clay. The potter relies on his skill and experience: creating, undoing, and remaking his work so that it eventually conforms to what he wants (Jeremiah 18:1–4). The word of the LORD that Jeremiah hears presumes a certain understanding of what he has seen in the potter’s workshop.

The LORD claims that Israel is like clay in the LORD’s hands (18:6). Certainly, as Paul understands this image in Romans 9:19–22, this affirms God’s sovereignty over Israel. Israel has no shape independent of the LORD. As the potter is sovereign over the clay, the potter also has to respond to the clay. In this way, the LORD also responds to Israel. Even though the LORD is currently planning a future of destruction for Judah, the LORD is willing to relent if Judah will turn back to God. This episode reaches its climax in verse 12 when Judah gives voice to her rejection of God’s plan. Instead of conforming to the desires of the potter’s hands, Judah will assert itself as if it actually controlled its own fate, as if it could shape itself apart from the LORD.

The LORD’s response in verses 13–17 indicates that this is an act of unimaginable folly. Snow does not leave the mountains of Lebanon. It is inconceivable. Yet, Israel has abandoned the LORD. Moreover, they have not abandoned the LORD for another god. Instead, they have concocted their own god, a delusion that has led them astray. As a result, the land will be destroyed and the people scattered.

It is unclear which aspects of Judean society comprise “they.” Perhaps these are “the priest,” “the wise,” and “the prophet.” They certainly bear the most responsibility for Judah’s plight. These are the people who should have felt the sting of Jeremiah’s words most directly. But in response, they begin to plot against Jeremiah. They will try to bring charges against Jeremiah, claiming that he is an enemy of the state.

This provokes a prayer from Jeremiah to God. As in his previous prayers to God (Jeremiah 11:18–23; 12:1–6; 15:10–21; and 17:14–18), Jeremiah reminds God that he has faithfully fulfilled his mission. He has spoken God’s words to the people, and it has led them to treat him as their enemy. In response, Jeremiah asks God to treat them as enemies, bringing destruction and death on them and their households. At various points, Jeremiah has interceded for the people of Judah before God. All of that is gone from this prayer. Jeremiah wants God to bring the destruction promised in Jeremiah 18:16–17 quickly and directly on those who are plotting against him. 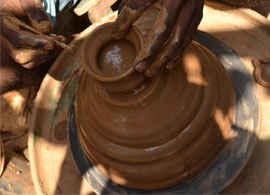 In chapter 19, Jeremiah is instructed to return to the potter. This time, he is to purchase a jug. Then he is to take the jug and bring witnesses from among the politically powerful to a place outside the city. They were to gather outside the Potsherd Gate. This gate is also known as the Dung Gate (see Nehemiah 2:13; 3:13–14). This was the gate through which people took garbage (including broken pots) out of the city. There, Jeremiah delivers a word from the LORD. Jerusalem is to be utterly destroyed because they have forsaken the LORD. They have worshiped other gods, and they have filled the land with the blood of the innocent. It appears that they have also engaged in child sacrifice. The practices here parallel those first articulated in Jeremiah 7:29–33. They have rendered Jerusalem uninhabitable for the LORD. In response, Jerusalem will be destroyed. They will suffer all of the ravages of war, including a siege that will lead them to eat each other in order to survive.

This idea that the people of Judah rendered Jerusalem uninhabitable for God is worth considering for a moment. On the one hand, believers want to affirm that God’s presence is everywhere. There is no place or time that is so ungodly that God is not there. This is incredibly good news. On the other hand, we certainly can create spaces where God cannot dwell as welcome guest or be acknowledged as sovereign. These are particular ways in which God is present. Indeed, these are the ways in which God desires to be present in the lives and communities of believers. When God cannot inhabit such spaces in this way, we should not assume that God is absent. Rather, God is present as an aggrieved lover, or righteous judge, or alienated friend.

The charges against Jerusalem that Jeremiah announces are not new; neither is the judgment that the LORD renders. Now, however, Jeremiah is instructed to enact that judgment by shattering the jug he had brought with him (Jeremiah 19:10). He is to shatter it in a way that will make it irreparable. This physical symbol of the rupture between Israel and God adds a new level of intensity and reality to the message Jeremiah brings. Moreover, the idea that this rupture is irreparable must mean that there is nothing the people of Jerusalem can do to avoid the horrors prophesied by Jeremiah. It cannot mean that God is incapable of repairing the relationship. Given the moments of restoration and renewal sprinkled throughout Jeremiah, it is clear that God can, and will, put the pieces back together.

In terms of the rhetorical shape of Jeremiah, it is reasonable to take the next incident as a direct response to the symbolic breaking of the jug outside of Jerusalem. Thus, as Jeremiah 20 begins, Jeremiah is arrested, beaten, and put in the stocks by Pashhur, the priest in charge of the Temple. This is the first overt action by the Temple authorities against Jeremiah. If they imagined this would intimidate Jeremiah, they were sorely mistaken. As soon as he is released from the stocks, Jeremiah announces a withering word from the LORD against Pashur and his friends (Jeremiah 20:3). After his initial denunciation of Pashhur, Jeremiah announces the destruction of Judah at the hands of the Babylonians; they will plunder all of the wealth of Jerusalem. Finally, the prophecy returns to Pashur (Jeremiah 20:6). Having witnessed all these disasters, Pashhur will be taken into exile, and there he will die along with all of the friends to whom he prophesied lies.

This is an interesting destiny for Pashhur. He himself will not be subject to the violent deaths that await many in Judah. Instead, he will have to watch it all unfold. He will have to live out his days among those who will know that he repeatedly delivered false and misleading words as if they were words from God. Everyone will know him as one of the people who is most to blame for the disasters that will befall Judah. He truly will be a sign of terror among the people.

After this bold and courageous response to his persecutors, Jeremiah turns to the LORD and reveals his own fears and anxieties in chapter 20. Jeremiah has no doubts that, unlike Pashhur and his friends, his words from God are true and faithfully delivered. Nevertheless, we see here the toll this takes on him personally.

Although most English translations of Jeremiah 20:7 have Jeremiah claim to have been deceived by the LORD, it is probably better to translate the Hebrew verb patah as “you have taken advantage of me.” The LORD has given Jeremiah a distinct prophetic mission. Faithfully fulfilling this mission brings Jeremiah into inevitable conflict with his friends, neighbors, and colleagues. They mock him openly and plot against him. In response, Jeremiah seeks solace and solidarity with God. So far, that has been elusive. The only other option open to Jeremiah is to keep silent, to abandon his mission. Jeremiah finds such an option impossible. He cannot keep the word of the LORD bottled up inside him (Jeremiah 20:9). In this situation, Jeremiah’s only option is to trust in God to deliver him and to vindicate his mission (Jeremiah 20:12–13). Of course, this alternative can only be achieved with the destruction of Judah. There are no good options here from Jeremiah’s perspective. He can only turn to lament. This is how chapter 20 ends: Jeremiah cursing the day of his birth.

There are two particular elements in this passage that seem relevant for a theology of ministry. First, one should be very slow and hesitant to take on the mantle of the prophet. It is fraught with peril as the relationships between Jeremiah and other would-be prophets indicate. It would seem that one should seek fidelity in ministry before seeking to be a prophet. Fidelity under certain conditions may lead to, or even require, one to become a prophet. That, however, is a secondary role, subsidiary to fidelity.

The second element that Jeremiah illustrates here is his persistent solidarity with the people to whom he is sent. It would be easy and perhaps psychologically desirable for Jeremiah, as God’s spokesman, to build an emotional wall between himself and the people to whom he speaks. He never does that. Even when he asks God to bring judgment on his enemies, he does so as one deeply enmeshed in the life of Judah. He never claims simply to be the messenger. He is invested in the people to whom he brings such horrific bad tidings. This combination of truthfulness and compassion is at the heart of all truly Christian ministry.