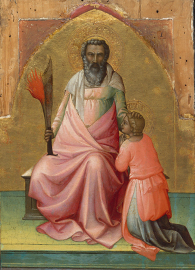 I like watching movies, usually the older ones (but that is another story). A technique I really enjoy with movies and other kinds of media is the proverbial “twist” at the end. I have experienced some pretty amazing twists in my movie-watching and novel-reading experiences. As a high school student, I still remember the twists in Charles Dickens’s Great Expectations and A Tale of Two Cities. More recently, the twist of Leonardo DiCaprio’s 2010 film Shutter Island was pretty intense.

One of the things that twists tend to do is to force one to go back to all that has happened before and reconsider those events in a new light. Now, having experienced the twist, the observer begins to see new things; certain incidents make a lot more sense, and maybe new perplexities arise, especially when, prior to the twist, the movie or book was making so much sense with the events seemingly going another direction. Twists provide occasions for engagement, all for good fun.

It would be a blatant understatement to say that, in Paul’s depiction of the gospel, Jesus (his life, ministry, message — basically everything surrounding him) brings a certain kind of twist to the covenant God established with Abraham. (The language, though, is helpful to some degree.) But whereas a twist in a movie or novel is all in good fun, the “Jesus twist” is one where the stakes are higher — a lot higher.

We are talking about thousands of years of tradition and history, and many people suffering and dying in order to preserve those traditions and histories. When Paul starts with “square one” reasoning, asking anew what are God’s purposes in the world, who is a Jew, and other matters, it is simply a mind-boggling and, quite honestly, threatening undertaking for those who have so much at stake in these discussions.

Real-life Implications of the “Jesus Twist”

Just to give a sense of these matters, let’s look at “real-life” implications of the “Jesus twist.”

And here we have Paul saying that the true Jew is the one who is inwardly so and that true circumcision is that of the heart? It all would have been too much for certain hearers of Paul to take, but Paul is trying to speak to a mixed congregation, one constituted by Jewish and Gentile followers of Jesus; he is trying to make sense of the history of what he has received as a faithful Jew with what has taken place in Christ and what the Spirit was doing among the nations of the world.

Who knows to what degree Paul struggled in his own journey to reach these conclusions? I am sure, as a fervent student of the law, Paul’s conclusions, which we see here in one of his last epistles, were not overnight discoveries, much less easy changes of opinions. Maybe his fictional interlocutor was once his own self, pushing the logical consequences of what he was coming to see about God’s work in a world after Jesus and Pentecost.

Harking Back to Abraham

To work this twist into all that has gone before, Paul has to go back to where it all started for the people of Israel — namely, their forefather Abraham, and some pivotal passages in both Genesis 15 and 17. In harking back to Abraham, Paul really is starting from “square one” in relation to Jewish identity. Abraham didn’t have the law, didn’t have the temple, didn’t have the Ten Commandments — so how did this party get started?

Paul admits that if God responds to people on the basis of outward actions and observances, then Abraham (as well as Paul’s fictional interlocutor) had grounds to boast. But no, Abraham’s righteousness, his favorable standing with God, was not on the basis that he deserved or had earned favor before God. Rather, this favor was granted freely by God to Abraham: “And [Abram] believed the Lord; and the Lord reckoned it to him as righteousness” (Genesis 15:6). We are talking about a gift and not a wage.

In taking the concrete example of Chapter 2 as well as of Galatians 5, Paul asks, Was Abraham considered righteous by God before or after circumcision? Obviously, the answer is before circumcision.

Yet Abraham was subsequently circumcised. In a move of phenomenal theological imagination, Paul suggests that Abraham’s righteousness prior to circumcision (Genesis 15), and yet his obedience in being circumcised in his already-righteous state (Genesis 17) means that Abraham is the perfect forefather both to Jews and to Gentiles who have faith, fulfilling the promise from God that Abraham’s descendants would be as numerous as the stars in the sky. Circumcision was to be a sign of the covenant between God and Abraham (Genesis 17:11), and this covenant began by God’s act of calling a pagan (and so, anachronistically, a Gentile).

And that is the condition that Paul mentions time and time again: faith. Once again, Paul introduces a complex term. We have touched on law, righteousness, and now faith. Readers should know that these abstract and polyvalent terms are difficult to pin down for Paul, especially since at times the terms function differently in varying contexts. As a condition, faith sounds like something we do, and so runs perilously close to being conflated with the idea of a work. Faith is not a work: we don’t earn our salvation by believing. Faith is not something we do or have in some fashion with God out of the picture.

As tough as it is to consider, I will offer it this way: faith is not something we do, but something that involves us in a genuinely active and responsive way [see Author’s Note 1]. Faith is not something we have or enact on our own, but it is a possibility that is such by the prompting and help of God. We are involved somehow, no question about it, but, at the same time, we cannot claim credit here, for ultimately faith depends on something or someone to believe in.

And when we do believe, it is God and God alone who freely and willfully reckons it as righteousness, as a state that is “in the right” with God and so covenant-orienting. And so the condition and the effect are all God-directed. It is hard to come away, after really thinking about the function of faith in Paul’s work, with the conclusion that faith is a work. Again, we play a role of giving up, submitting, assenting — but, in all of these acts, the glory belongs strictly to God, the One who created us, sustains us, and leads us as people capable of believing and relating to him.

It is this last point that is worth pressing. Often, faith has a way of generating connotations of a strictly cognitive kind. It’s as if many people think that believing in God and believing in the idea of God are the same; they are not. Faith is not strictly a cognitive affair; if anything, it is a totally self-involving act, because that is what God requires of us.

It is deeply associated with the term trust, and it is thoroughly relational. Remember: Abraham did not just believe that God existed; he trusted God, heeded God’s call, left his home country, and accepted God’s covenant with him in which their futures were indelibly tied.

Basically, in having faith in God, Abraham put his whole life in God’s hands. As Paul enumerates, “No distrust made him waver concerning the promise of God, but he grew strong in his faith as he gave glory to God, being fully convinced that God was able to do what he had promised” (Romans 4:20–21). What Paul points out here again is that faith is not strictly a mental assent but a relational kind of trust, and the latter grows over time as the relationship matures.

And, on the basis of the righteousness of faith — a faith that God makes possible and yet Abraham allows and cultivates — Abraham became not only the progenitor of the Jewish people but a source of blessing for all the families and nations of the earth. Fascinating in the various words of God to Abraham is the fact that God’s plans were always cosmic in scale (“You shall be the ancestor of a multitude of nations” (Genesis 17:4; see also 17:5).

Paul’s point is that Abraham’s descendants have been too myopic to see the grandness of the scale involved. Abraham was called to be the father of those from sundry peoples and nations who share in his faith. A move Paul makes here is quite startling: In elaborating this “righteousness of faith” — how in Abraham’s case faith was reckoned to him as righteousness — Paul puts Abraham and Abraham’s faith in the same categories as those who accept the Christ story today:

“[Righteousness] will be reckoned to us who believe in him who raised Jesus our Lord from the dead, who was handed over to death for our trespasses and was raised for our justification” (4:24–25).

Essentially, in Jesus the covenant has been renewed and opened up. Now, Gentiles are invited to be part of the elect people of God.

Although it is important to remember that chapter and verse numbers in the text were added later, we reach a helpful stopping point at the end of Chapter 4. Paul is saying that the God of Israel is the God who raised Jesus from the dead. The God of Abraham is the God of Jesus Christ.

Paul continues that God has been at work doing a singular work since Abraham, and now, as seen in the display of God’s works and power since the day of Pentecost, this promise and work are extending to all the nations and peoples of the world. Such reasoning calls into question the privileging that may be attributed to being the “people of the promise” or God’s “chosen people.”

As indicative of Christ’s reign, Paul suggests that the basic trait, the one nonnegotiable, of being part of God’s new reign is being children of Abraham — namely, those who believe and trust in the God of Abraham, Isaac, and Jacob, this God who has raised Jesus from the dead.

Theologically and historically, there has been a tendency to think that God has to be the only or all-determinate cause in all meaningful action related to salvation, but that trajectory of thinking is in tension with how we think about salvation “on the ground,” for we speak quite casually about actions that are associated with our agency in the way of holiness, such as repenting, forgiving, loving, and the like. Whatever agency we have, it is given by God, and our agency and God’s agency need not be incompatible, given that we are first and foremost God’s creation. In other words, I am trying to make room for the possibility for obeying the command of Jesus to be perfect as our heavenly Father is perfect (Matthew 5:48).