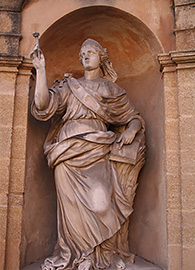 Last week, I made mention of a “cycle” in the book of Judges where Israel sins (idolatry, unfaithfulness to God, civil rivalry, etc.), God gives them over into the hands of their enemies in the land, they subsequently cry out for help, and God “raises up” a judge to act as a savior and deliverer for them.

This is a repeated cycle in Judges 3:7–16:31, with different enemies and different judges but the same faithful God and same sinful Israel. So, while the title “cycle” is altogether appropriate, the book of Judges narrates this repeated habit in a way that looks more like a down-spiral. The classic “cycle” would portray the “judge” as an extension of God’s own saving power and love (see Judges 6:9).

As the book progresses, however, the actual judges of Israel look less and less like proper representatives of Israel’s God and more and more like the sinful people!

I often ride the bus to work, and sometimes it gets bumpy. While I start off the journey sitting more-or-less straight up, the seats are slippery, and halfway through the trip I find that I am nearly lying down on the seat! While the early judges are shown as ideal types (“upright”), by the end of the book, their standards have sunk down as well!

As a reminder, I would like to point out that to call these leaders of Israel “judges” is a bit misleading. Their role was not primarily legislative or juridical — they were not law-court “judges” — like Judge Judy. The way the term is used in this book, it means something more like a leader of Israel who seeks justice for Israel, which often includes a strong protective component — i.e., defending the nation from outside threats to Israel’s shalom (peace).

Under oppression from the Mesopotamian king, God raised up Othniel to be a “deliverer” (3:9). We know only a few small things about Othniel, but they are important.

After that, the LORD “made strong” Israel’s enemy, the Moabites, as punishment (3:12b). When Israel called out to God remorsefully, the LORD “raised up” Ehud. Ehud double-crossed the king of Moab in a stealthy plot (3:14–27) and ushered in a peaceful period of 80 years (3:30). Passing mention is made of the judge Shamgar, who valiantly fought 600 Philistines with only a cattle prod!

Even after these signs of God’s merciful presence and favor on behalf of his prodigal people, they turned again to evil ways and God handed them over to the Canaanites and their military leader, Sisera.

The story of Deborah is a highpoint, if not the highpoint, of the whole book of Judges. The cycle from 4:1–5:31 shows the unerring leadership of Israel’s only female judge. Under the oppression of the Canaanites and their intimidating 900 “chariots of iron,” Deborah served as “judge” over Israel (4:4).

In view of the harrowing domination of the Canaanite leader Sisera, Deborah called for the Israelite warrior Barak to stand against the threat. Deborah promises to give Sisera into the hand of Barak if he is willing and obedient.

When Israel battles against Sisera’s forces, the LORD works mightily against the Canaanites and Sisera flees to what he knew to be an ally, Heber the Kenite (4:17). In actuality, he is shown hospitality by Heber’s wife Jael in her tent (which apparently was a separate housing unit).

At this point the story is familiar to many: Jael makes Sisera comfortable, and he takes a nap. Then Jael hammers a tent-spike into his forehead (4:21)! This assassination led to freedom from the relentless opposition of the Canaanites for a time (4:24). They had peace for 40 years (5:31).

Chapter 5 narrates the same story of Deborah and Barak’s military success by the help of the LORD, but in poetic terms. Two themes pervade this “song.” First, the victory belongs to YHWH — the Divine Warrior. It was not primarily human strength and strategy that was victorious, but God’s own power at work on behalf of his people. On the other hand, a number of the tribes of Israel did not choose to go and fight Sisera, and their allegiance and bravery are called into question.

It should go without saying that the fact that the model judge of Chapters 4 and 5 is a woman is attention-getting. Within the category of Old Testament books called the “Historical Books” (Joshua, Judges, 1 and 2 Samuel, 1 and 2 Kings, 1 and 2 Chronicles, Ezra, Nehemiah, Esther, Ruth), the book of Judges stands out for having a female positioned in such a prominent leadership role.

Given that most modern westerners have a perception that the Bible sets up women in a subordinate category of status in society, this is a very important text from Scripture for a number of reasons. At the very least, we see here that the notion of a woman’s place being (only) in the home, that women cannot fulfill leadership positions, or that women should be silent in meetings are complicated by Judges 4–5.

The first thing to reiterate is that Deborah receives a rather lengthy treatment early on in the book of Judges, and models a wise and strong form of leadership. As a “judge” she clearly possesses governing authority.

Indeed, unlike the other judges, she actually did happen to have a key law-court role, where Israelites (including men!) came to her for “judgment.” Given the national status of the “judge” in this time period, she would be the highest arbiter in Israelite society. Clearly YHWH felt Deborah capable of carrying out such a task, and apparently she acquitted herself remarkably.

One rebuttal that has been made in this regard is that God approved of Deborah’s making executive decisions, but she did not “preach” or “teach.” (Obviously, this kind of “clarification” aims at showing that only men should be permitted to preach and teach in our modern context because of “biblical standards.”)

In the first place, if we define “preach” as a proclamation of “the Gospel,” then really no one in the Old Testament did that! However, if “preach” is understood more generally as “proclamation” that is authoritative and divinely instituted, then certainly Deborah did this much. Her role as judge would have afforded her the opportunity to make divinely authorized verdicts which are, for all intents and purposes, a form of “proclamation.”

More importantly, in this regard, she is called a “prophetess.” A prophet was one who acted as a conduit of divine speech, a mouthpiece for God. In fact, when she tells Barak that she will go with him, but notes that a woman will be the one to subdue Sisera, this has all the marks of being a word of divine prophecy (4:9). Both her prophetic statement here and her overall military acumen point to an authoritative role that involves much more than “standing behind her man” and providing only or primarily a “supportive” role.

One more key point should be made: Deborah’s role is meant to parallel that of Moses, the paradigmatic “prophet” and leader of Israel.

Thus, while the Old Testament demonstrates a strong patriarchal system in which men are generally head of house and state, we see clear glimpses of women who lead wisely and with the authority and blessing of God. Many Christians, including myself, believe these few instances are signs of things to come in Christ — a foretaste of finding value in the wisdom and guidance of both men and women, made in God’s image, gifted for various tasks, and (though certainly differing in specific ways by gender) completely equal before the LORD.

Judges 5:7, in reference to the unique time of deliverance ushered in by Deborah, refers to her as “a mother in Israel.” While this could be taken as a bare statement of fact that she had biological children, there is good reason to believe that she rose up as a national caretaker; or, as the New English Translation puts it, “a motherly protector in Israel.” However you look at her “motherly” role, there is little doubt that the book of Judges sets her up to be a hero in Israel and a wise judge for the people.

From the end of Deborah’s time onward, things really start to go downhill, beginning with Gideon and coming to a climax with Samson. The “heyday” of the judges, so to speak, has come to an end. Israel has a long road ahead, now, before there is hope — before they have a king for the people.