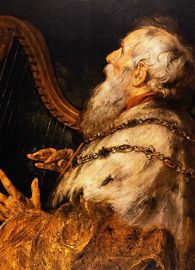 EnlargeAn Ending That Leaves Something to be Desired

When the movie The Fellowship of the Ring came out in 2001, I saw it with two friends. One was — like me — an avid fan of J.R.R. Tolkien, and the other came along for the fun. When the movie was over, the latter friend turned to us and commented, “That ending left something to be desired.” “That’s because it’s not the end,” we explained, telling her that The Lord of the Rings is a single story divided into three parts. Some might have a response similar to hers when they finish 2 Samuel. Though the books end, it is not the end of David’s life; that will happen in 1 Kings. Additionally, 2 Samuel does not have one of those “and they lived happily ever after” endings. It may leave something to be desired.

Obviously the story does continue, as often happens in Scripture when one biblical book picks up on a narrative from the previous one. And I believe that these final chapters provide an appropriate ending to the books of Samuel. Their songs of praise point us back to where we began, with Hannah’s song. These chapters also point forward in the biblical canon to Chronicles, which gives us a different lens through which to see David, and to Psalms, where so many of the individual psalms are connected to David. And these last chapters of 2 Samuel point to the theological center of these books, professing that the story has always been about God’s graciousness amidst human mistakes and frailty.

Since the early 1900s, scholars have observed that 2 Samuel 21–24 has a particular structure which can be describe as symmetrical, or ring-like [see Author’s Note 1], as follows:

C 22:1–51, a song of thanksgiving for the LORD’s deliverance

Remembering what Saul has done does help us understand the disturbing story about the death of Saul’s remaining sons. The famine, described in the beginning of 2 Samuel 21, lasts for three years before David questions God as to its cause. God answers, “There is bloodguilt on Saul and on his house, because he put the Gibeonites to death” (21:1). Saul’s actions against the Gibeonites have not been mentioned prior to this in the text; the only explanation of this event is found in 21:2.

After David has a conversation with the Gibeonites, they ask for seven of Saul’s descendants to be handed over to be killed. David gives the Gibeonites two of Saul’s sons and five of Saul’s grandsons, and they are “impaled […] on the mountain before the LORD […] at the beginning of barley harvest” (21:9). The timing — during those first days of harvest — likely is meant to signal that the famine will end.

This grim story contains two slightly more humane elements. First, it mentions Mephibosheth and explains that he is spared because of the covenant that David had made with Jonathan. The Gibeonite revenge and reparation do not trump David’s love for and faithfulness to Jonathan and his family. Second, Rizpah, the mother of Saul’s sons, cares for the bodies of those slain. Her actions in honor of the dead prompt David to respond with decency. David gives them a proper burial, after which “God heed[s] supplications for the land” (21:14).

God’s faithfulness and steadfastness to the covenant are described more in 2 Samuel 23. David reminds the listeners of the everlasting covenant God made with him, asking the rhetorical question, “Will [God] not cause to prosper all my help and my desire?” (23:5). The resounding answer to that question should be an unequivocal “Yes!” In contrast with what will happen to “the godless” (23:6–7), David’s house is established and secure.

One interesting detail about 2 Samuel 23:1–7 is that it is introduced as being an “oracle” (23:1). This word is the Hebrew word nĕʾum. It occurs most often in prophetic texts, when people specifically speak for God (cf. Numbers 24:3–4, 15–16). David’s language in 2 Samuel 23:2 confirms this meaning when he says, “The spirit of the LORD speaks through me, his word is upon my tongue” (cf. Isaiah 61:1 and Luke 4:18). We know that David is king, but here David is also prophet, embodying the word of God. Another interesting detail is that though the text describes these as “the last words of David,” they focus not on who David is and what he has done, but on God.

In some ways it might be better to end the books of Samuel with 2 Samuel 23’s high note of recalling the covenant and the victories of David’s fighters. But as is so often seen in the books of Samuel, we do not have a whitewashed picture. Instead, 2 Samuel 24 begins with the unexplained anger of God and the description that God “incite[s] David against [the Israelites]” (24:1). We may be uncomfortable with this, but the narrator doesn’t linger. In the account of this event in Chronicles, it is not God but the adversary (the Hebrew word satan) who instigates David’s actions.

What David does is take a census of the people of Israel and Judah. We have clues that there is something wrong, not only because the passage is introduced by words like “incite,” but also because of Joab’s response to David. Joab has never shied away from being direct with David, and here, too, Joab questions David. But David prevails, and Joab and the commanders go out and get a number of the fighting men.

This census is a prelude to a military draft. Later, Solomon will use the numbers to conscript forced labor and tax the people (1 Kings 4:7–19, 27–28; 5:13–14). Samuel had warned the people about kings who take and misuse their power. David’s census testifies to the power that he holds and seemingly intends to use. Though David is incited by God, he falls into the temptation to be a king like those in the other nations (1 Samuel 8:5, 20).

But even before God sends a prophet to confront David about this wrongdoing, David comes to realize that what he has done is wrong, and he prays in repentance. The prophet Gad — not Nathan this time — comes and offers David a choice from three terrible options: famine, flight, or pestilence. David chooses the third, but also places his trust in God, saying, “let us fall into the hand of the LORD, for his mercy is great” (2 Samuel 24:14). This cannot just be a pious platitude. David knows — and has experienced — God’s punishment and God’s mercy, and he makes the informed choice to turn again to the one he knows to be faithful.

God does relent, and David intercedes for the people, offering himself to be punished in their place (2 Samuel 24:17). David then builds an altar and makes offerings, and God responds. The final verse of 2 Samuel explains that “the LORD answered [David’s] supplication for the land, and the plague was averted from Israel” (24:25).

Something to be Desired

This ending does leave something to be desired, but in a positive sense: We might desire a relationship with God that is similar to the one David enjoys with God, as he continually trusts, submits, prays, and worships. We might also desire the real hope that God’s promises of blessing will come true in our own lives, and a living faith in the God who is the true source of power and love. And we might desire the return of the righteous King who follows in David’s good footsteps (while avoiding his pitfalls), and whose kingdom will have no end.