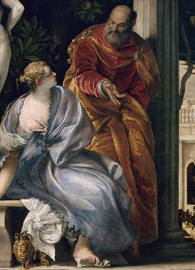 These chapters move from the heights of the glorious Davidic covenant in 2 Samuel 7 to the depths of David’s mistakes. We may lose something in our admiration for David, but we will gain believability in the story that is told so honestly and unsparingly. And we will be reminded that these biblical characters who are chosen and beloved by God are also frail and human. David’s fall from grace, however, does not mean that he loses God’s grace. In fact, grace may be all the more abundant and apparent in weakness. Additionally, grace is not something that is always warm and fuzzy [see Author’s Note 1]. Grace can scrape you up and leave you raw; grace can be painful when it shines a light onto what you would rather keep in the dark. And, as David and Bathsheba learn, grace does not erase consequences.

2 Samuel 8 provides a quick review of David’s success in war against the Philistines, the Moabites, and the Arameans, and 2 Samuel 10 sets the stage for David’s fall by recounting details of the war against the Ammonites. These chapters about war are interrupted by 2 Samuel 9, which returns to the topic of Saul’s family. Specifically, David asks if there is anyone left of the house of Saul to whom David can “show kindness for Jonathan’s sake” (9:1). The word that gets translated in the NRSV as “kindness” is that rich and nuanced Hebrew word hesed that appears in 1 Samuel 20 when David and Jonathan make a covenant with each other. “Steadfast love” or “loyalty” may be better translations of the word in light of that covenant, as David is certainly alluding to his covenant with Jonathan in his question. David had vowed hesed to Jonathan and his family, and now is attempting to make good on his vow.

The member of Saul’s family who is left is Mephibosheth, Jonathan’s son. He is lame in both of his feet as a result of the time his nurse picked him up to flee when they heard about Saul and Jonathan’s deaths, and Mephibosheth subsequently fell and injured his feet so badly that he cannot walk (2 Samuel 4:4). When David meets Mephibosheth, David begins with a word of assurance, telling him, “Do not be afraid, for I will show you kindness for the sake of your father Jonathan” (9:7). David continues with two promises: First, that David will restore Saul’s land to Mephibosheth, and second, that Mephibosheth will have a place to eat at the king’s table [see Author’s Note 2].

Mephibosheth responds by bowing before David, and by referring to himself as a “dead dog” (9:8), a common way in the ancient Near Eastern texts to express humility. 2 Samuel 9 ends by narrating that David makes good on his promises to Mephibosheth. The repetition of Mephibosheth’s lameness (9:3, 13) is significant in light of the strange statement in 2 Samuel 5:8 about David’s hatred and exclusion of “the blind and the lame.” Mephibosheth, who is lame, is shown steadfast love by David and welcomed into David’s house.

2 Samuel 11, the chapter that tells of David’s adultery with Bathsheba and the murder of Uriah, gives us clues that there will be problems from the start. 11:1 explains that this takes place in spring, when kings go to war. But David remains at Jerusalem while everyone else goes off to fight. One of the reasons why the Israelites asked for a king in 1 Samuel 8 was that they wanted someone to lead them in battle. David is not where he should be, when he should be there. David’s being in the wrong place at the wrong time continues in 11:2, which explains that he rises from his sleeping place late in the afternoon, apparently napping while his soldiers are off fighting the Ammonites. As he walks around on his roof he sees beautiful Bathsheba bathing. Poor Bathsheba has often been depicted as bathing on the roof in the open where she could be seen, but the text does not say that. David is on the roof, not her [see Author’s Note 3].

In 11:3, David is told that Bathsheba is married, and not just to anyone: Bathsheba is “the wife of Uriah the Hittite” and the “daughter of Eliam.” These two men are part of David’s elite fighting company (2 Samuel 23:34–39). Bathsheba is a woman with a husband and a father, and having those family connections should mean that she is protected. The widows and orphans are the most vulnerable in Israelite society, which is why there are so many laws in the Old Testament commanding their care. But in 11:4, David takes Bathsheba and sleeps with her.

There are no details in 11:4 about either of their emotions, their thoughts, what is said, or how long this interaction lasts. The lack of detail is part of what makes this encounter — and Bathsheba’s character — so interesting as interpreters fill in the gaps in different ways. Bathsheba has been interpreted everywhere on the spectrum from helpless victim to hapless seductress. In 11:5, the problems for David continue because the adultery cannot just be forgotten or hidden; Bathsheba gets pregnant. The one detail noted in 11:4, that she had been “purifying herself after her period,” lets us know that Uriah cannot have been the father of the child.

David’s Attempts at a Cover-Up

Still, David attempts three times to hide what he has done. First, he sends for Uriah and tells him, “Go down to your house, and wash your feet” (11:8) [see Author’s Note 4]. The implication of that command, which Uriah understands, is that Uriah should go and sleep with his wife. But Uriah is a man of principle and honor, and will not do so while his fellow officers remain at war (11:11).

David’s second attempt is to get Uriah drunk, in the hopes that in that state Uriah will go to Bathsheba and sleep with her. However, as Peter R. Ackroyd observes, drunk Uriah is more righteous than sober David [see Author’s Note 5]. In the same way that we do not have details about Bathsheba’s thoughts or feelings, we do not know whether or not Uriah knows about what has happened between his wife and David. As with Bathsheba, there are different possibilities for Uriah’s character.

David’s third attempt at a cover-up proves to be the charm: He sends a message to his commander Joab, telling Joab to place Uriah at the front of the battle line and then have the troops withdraw from him. If Uriah is left exposed and alone, he will be killed. Notice that David sends this message to Joab by Uriah, which means that Uriah is carrying his own death sentence.

Joab doesn’t quite follow the orders as given. Uriah is killed, but others are too (11:17). When Joab sends the message to David about Uriah’s death, he tells the messenger that the king might get angry that they went so near to the city to fight. In Joab’s imaginary scenario, David refers to the death of Abimelech, a character from Judges who dies when a woman throws a millstone from the city wall (Judges 9:50–55). Joab’s mention of this might be his own veiled way to tell David that he knows Uriah died because of a woman. David responds to the news of Uriah’s death using the very same language about the sword devouring that Abner uses when he speaks to Joab in 2 Samuel 2:26. In that context, Abner is telling Joab to stop; David’s use of the phrase seems to be a similar — if indirect — rebuke to Joab to tell him to leave the matter alone.

When Bathsheba hears about the death of Uriah, she laments — an action that stands out in 2 Samuel 11, which otherwise lacks emotions. After the official time for mourning ends, David marries Bathsheba, and she gives birth to a son.

2 Samuel 11:27 contains God’s statement of judgment against David. Here, the NRSV softens the judgment with the translation “the thing that David had done displeased the LORD.” But the Hebrew could be more literally translated as “the thing that David had done was evil in the eyes of the LORD.” In the very next verse, 2 Samuel 12:1, God sends the prophet Nathan to David, and Nathan tells David a parable about a rich man who took a poor man’s beloved lamb and killed it. When David hears the parable, he condemns the man, who is — of course — himself (12:7).

Nathan proceeds to remind David of all that God has done for him, explaining that God would have done more if it were not enough (12:8). David’s wrongdoings enumerated in Nathan’s speech include despising the word of the LORD, killing Uriah, and taking Uriah’s wife Bathsheba. The consequences are harsh: The sword will never depart from David’s house, his wives will be taken by another, and the child born to David and Bathsheba will die. This is a hard grace, indeed.

When David responds, he gives no excuses and makes no equivocation. He simply says, “I have sinned against the LORD” (12:13). Here it is illustrative to compare David with Saul, who always had reasons for his actions and always had more to say when confronted (1 Samuel 13:11–12; 15:14–21). Psalm 51, which is traditionally connected to this story of David’s sins, is full of language of repentance. In 2 Samuel 12, David’s acknowledgement of his sin is the start of his turning back to God.

The consequence Nathan foretells does happen; the child conceived when David commits adultery with Bathsheba gets sick and dies. David then comforts Bathsheba, and she has another son. His name is Solomon, but Nathan comes with a message that Solomon’s other name is to be “Jedidiah,” which means “beloved of the LORD.” 2 Samuel 12 ends when David finally joins his people in a victorious battle against the Ammonites (12:29–31).

As mentioned before, David’s own name means beloved, and it also shares the same Hebrew letters with “Jedidiah.” This alternate name for Solomon is an important reminder of the love of God, as well as the promise that — as in David’s case — there is nothing we can do that will separate us from God’s love.

The novelist Flannery O’Connor depicts the uncomfortable nature of grace quite clearly, especially in her short stories like “The Turkey” or “Revelation.”

We do not know very much about bathing practices of the time, but Bathsheba could have been in a private place where she did not think she could have been seen. The story of Susanna in the Deuterocanon gives an interesting comparison, as she gets spied on by two wicked elders while she is bathing.

Some references to feet in the Old Testament have sexual connotations; cf. Ruth 3:4–8.