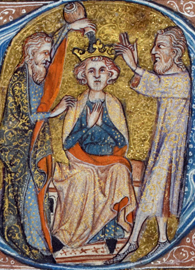 In these two chapters, David finally takes the throne over all Israel, makes Jerusalem his capital city, and brings the ark of God there. The ark had previously been left in Kiriath-jearim in the care of Eleazar, son of Abinadab (1 Samuel 7:1–2). As with other sections of book of Samuel, this is no simplistic story; rather, it has complications and complexities. Though David now has the highest position of power over Israel, the story of the ark reminds us that God is still more powerful, in unpredictable and unexplainable ways.

While David’s ascension to the throne provides a happy resolution to what was foretold in 1 Samuel, it comes at a cost for Saul’s descendants. And though these chapters paint a beautiful picture that God’s promises come true, there is ugliness in David’s taunt against the blind and lame. David’s greatness here — as always — is not the result of his inherent power and goodness; as 1 Samuel 5:10 explicitly says, David is great because “the LORD, the God of hosts, [is] with him.”

From Hebron to Jerusalem

In 2 Samuel 2, David was anointed king in Hebron by those from Judah. In 2 Samuel 5, he is still in Hebron, but now those from the rest of the tribes of Israel come to make him king over everyone. As they come to David, they say, “we are your bone and flesh” (5:1). This phrase first gets used in Genesis 2:23 when Adam sees the newly created Eve, but it also occurs in Genesis 29:14 when Laban identifies Jacob as his close kin, and in Judges 9:2 when Abimelech attempts to set up a monarchy during the time of the judges.

David’s next action is to march with his men to Jerusalem, where they fight against the Jebusites living there [see Author’s Note 1]. In a tactically brilliant move, David sends in his troops to the point where the city is vulnerable, through its water system. This military maneuver, however, is commanded in a rather strange way. David says, “Whoever would strike down the Jebusites, let him get up the water shaft to attack the lame and the blind, those whom David hates” (5:8). 5:8 continues to explain, “Therefore it is said, ‘The blind and the lame shall not come into the house.’”

The Blind and the Lame

At best, this is a strange directive; at worst, it is a text that can be used to justify exclusion of persons with disabilities. In particular, what is the “house” from which the blind and lame are supposed to be excluded? It could be David’s house, which can refer to his dynasty or his palace (cf. 2 Samuel 7). It could also be the house of God, the temple that Solomon will build in 1 Kings. If it is the latter, nowhere else does it say in Scripture that the blind and lame cannot come to the temple. There are commandments stipulating that priests who are blind and lame may not make sacrifices (Leviticus 21:18), and that blind or lame animals cannot be sacrificed (Deuteronomy 15:21), but there is no prohibition against the blind and lame entering the temple [see Author’s Note 2].

One explanation for David’s instruction is that David is responding to the taunt from the Jebusites that the city of Jerusalem is so well defended that even the blind and lame could keep David out (5:6). David — in this explanation — is merely using the Jebusites’ language against them. The Hebrew text includes a note suggesting that instead of reading that the blind and the lame are “those whom David hates” (5:8), one could read the clause as “those who hate David,” which might then justify his exclusion of them. Such explanations can help 5:8 to be less surprising or offensive, but it is also important to recognize that statements like this in the Bible can be offensive to people who cannot see or cannot walk.

In Jerusalem, David becomes more settled and secure: He builds a palace, takes more concubines and wives, and fathers more children (5:11–16). The Philistines come up to the valley of Rephaim, close to Jerusalem, but David defeats them. In some ways, this is not surprising given that David’s first public act was to lead the Israelites to victory against Goliath and the Philistines. But at this point, the Philistines may have still thought that David was under the service of the king of the Philistines. David’s war and defeat of them would be a decisive sign that there is no longer an alliance. As before (1 Samuel 23:2, 4; 1 Samuel 30:8), David inquires of the LORD what he should do, and only follows the directions that God gives him. Thus, David is only successful because God is working with him, as the text makes clear in 2 Samuel 5:10. 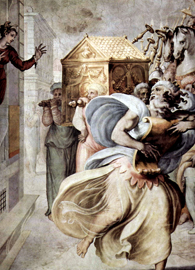 In 2 Samuel 6, David brings the ark to Jerusalem, and this move signifies several important things. The ark has always been associated with God’s presence and power, and that divine presence and power are now linked to David’s kingship in David’s city. With Jerusalem as the home for the ark, David’s rule is not only political but also religious; this is a theo-political kingship. Psalm 132 celebrates the ark coming to Jerusalem (referred to as Zion in the psalm) and explains that it was not only David who chose Jerusalem, but God. Another sign of David’s role as more than just political is that he is now the patron of the ark, a role that has been reserved for the priests. One of Saul’s problems was that he transgressed his role as king when he offered sacrifices (1 Samuel 13). In contrast, David embraces his religious authority in addition to his royalty.

Still, the ark does not go on a direct journey but instead has a layover in the house of Obed-edom in Gath for three months. The reason? On the road, the oxen shake the ark, and Uzzah — a son of Abinadab, the previous caretaker of the ark — puts out his hand to steady it, prompting God to immediately strike him dead. 2 Samuel 6:7 explains what Uzzah did using a somewhat ambiguous term; the Hebrew word means “error,” but the NIV translates it as “irreverent act,” while the NRSV borrows from the version of the story in 1 Chronicles 13:10 to translate the text as “God struck him there because he reached out his hand to the ark.”

According to Exodus 25, the ark was supposed to be carried on poles by the Levites, not be placed on a cart drawn by oxen as the Philistines had done when they originally returned the ark to Israel (1 Samuel 6), so perhaps God was displeased with the mode of transportation. Others have argued that Uzzah should have known better. 17th century commentator Matthew Henry explains that Uzzah was so familiar with the ark that it bred contempt, and that God punished Uzzah for the irreverence and presumption God saw in Uzzah’s heart.

David’s responses to Uzzah’s death are interesting. David is first angry at what God does, and only secondarily does he express fear. David had planned a great return for the ark, but it did not go as he might have hoped. The death of Uzzah was a terrible interruption to the dancing and singing before God (2 Samuel 6:5), reminding all that the ark has great holiness and power. Then David is afraid, so much so that 6:10 tells us he was “unwilling” to take the ark into his own care. Therefore, David leaves the ark with Obed-edom for three months. During that time, Obed-edom and his entire house are blessed. When David is told about these blessings, he has a change of heart, retrieving the ark and bringing it to Jerusalem. Though the ark cannot be treated casually or lightly, it does bring blessings to those in whose care it rests. And when David brings the ark up from the house of Obed-edom, he does so “with rejoicing” (6:12).

The rejoicing includes a continuation of dancing and celebration. One difference in this second stage of the ark’s journey is that while both David and all Israel were dancing initially, now David’s dancing is emphasized. The text tells us that “David danced before the LORD with all his might” (6:14), and that Michal — Saul’s daughter and David’s first wife — saw David “leaping and dancing before the LORD” (6:16).

When Michal sees this, 6:16 continues, “she despise[s] [David] in her heart.” Her reaction is not simply to the dance, but also in part to what David is wearing (or not wearing, as the case may be). 6:14 explains that David is wearing a linen ephod, the same garment that is worn by Samuel in 1 Samuel 2:18, and by other priests (e.g., 1 Samuel 2:28; 22:18, etc.). When Michal speaks with David, she explains that he has “uncover[ed] himself” (2 Samuel 6:20) — the implication being that during his leaping and dancing his robe has flown up and exposed his lack of undergarments.

It is likely that Michal despises David not only because of his actions and inappropriate dress in this particular moment. As Robert Alter says, “one’s emotional reaction to an immediate stimulus can have a complicated prehistory” [see Author’s Note 3]. There are some clues about Michal and David’s fraught relationship in the language used to describe both David and Michal throughout this section (2 Samuel 6:16–23). Michal is not referred to as the “wife of David,” nor is David referred to as her “husband.” Instead, she is always called “daughter of Saul” (2 Samuel 6:16, 20, 23), while David is referred to as “king” (6:12, 16, 20). Indeed, David is the king, and he has replaced her father, Saul, the former king.

Three more clues can be found in Michal’s sarcastic comment to David in 6:20. First, David’s uncovering of himself is not what kings of Israel are supposed to do. Second, David has done this “before the eyes of his servants’ maids” (6:20), which may be a reference to the harem David has acquired since Michal was parted from him. And third, David’s actions have not been honoring, but debasing. Is Michal only referring to David’s dance, or might she also be thinking about how he reacquired her from Paltiel (2 Samuel 3:15–16)?

David responds to Michal’s invective with his own harsh and sarcastic words to her, and the final word in the chapter is that Michal “had no child” (6:23). However, we are not told the identity of the primary actor behind Michal’s childlessness. Is God preventing Saul’s daughter from having a child? Has David rejected Michal in favor of his other wives? Or is it Michal who refuses to have further interactions with David? Ultimately, this final story in 6:20–23 underscores that it is David who is the king of Israel, and that Saul’s line is dying out. As David holds the position of ultimate power in Israel, that power will tempt him in certain ways in the chapters to come. For now, David is the great king whose greatness lies in the fact that God’s favor and presence are with him.

This group of people was living in Jerusalem at the time of the conquest, but the people of Judah fail to drive them out (Joshua 15:63; Judges 1:21). They are also mentioned as part of the list of the seven nations whose land gets promised to Abraham and his descendants (Genesis 10:16; 15:21; Exodus 3:8, 17, etc.). Jerusalem was also associated with the priest Melchizedek, who blessed Abram in Genesis 14, and to whom Jesus is compared throughout the book of Hebrews.

The community of Jewish believers who lived at Qumran had more explicit and restrictive commandments against the blind and lame; cf. Saul M. Olyan, “The Exegetical Dimensions of Restrictions on the Blind and the Lame in Texts from Qumran,” Dead Sea Discoveries,8, 1 (2001), 38–50.