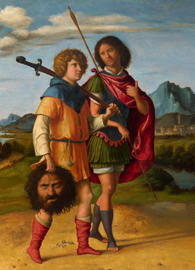 The previous Lectio noted how fitting it is that David’s name means “beloved,” and this week’s selection of text will demonstrate how David is loved by Saul’s children, Jonathan and Michal. The love that Saul’s children have for David is not simply love-as-emotion. Instead, for Jonathan and Michal, love is a verb, and they love David through actions that ultimately are costly to them. But not everyone loves David. Specifically, Saul’s favor toward David (1 Samuel 16:22) is replaced by jealousy and fear.

Jonathan’s love for David begins the chapter. 1 Samuel 18:1 explains, “the soul of Jonathan was bound to the soul of David, and Jonathan loved him as his own soul.” There are different ways to read this, including as a picture of two men in a romantic relationship [see Author’s Note 1]. The first phrase, describing one’s soul being bound to another, also occurs in Genesis 44:30 where Judah explains the connection between his father, Jacob, and his youngest brother, Benjamin. Judah continues in 44:31 to say that if he were to return home without Benjamin, Jacob would die. The second phrase ­— that Jonathan loves David as his own soul — is repeated two more times in 1 Samuel 18:3 and 20:17. Repetition in Hebrew is used for emphasis, so the threefold repetition in as many chapters emphasizes Jonathan’s love for David.

Because the narrator’s description of Jonathan’s love is immediately followed by Jonathan’s action of making a covenant [see Author’s Note 2] with David (1 Samuel 18:3), we can assume that the covenant is motivated by love. The text does not reveal any of the content of the covenant between David and Jonathan; more details will be given about the covenant they make in 1 Samuel 20. But it is probable that part of their covenant is Jonathan’s act of giving David his robe and his weapons (18:4). This is not just an act of generosity; Jonathan’s robe (the Hebrew me’il) is likely his royal robe. By giving it to David, Jonathan is symbolically giving David his own right to succeed his father, Saul, on the throne.

Jonathan’s weapons include his armor and his sword. Saul had tried to give those items to David to prepare him for battle against Goliath, but David did not accept them (17:38–39). Walter Brueggemann points out that the difference is that Saul tries to equip David for battle in ways David does not need, but Jonathan is authorizing David for the throne, which David does need [see Author’s Note 3].

There is a stark contrast, though, between those who love David — Jonathan and everyone else in Israel and Judah (1 Samuel 18:16) — and Saul. It is instructive to trace how Saul’s response to David unfolds in chapter 18. In 18:5, Saul makes David the head of his army, and even Saul’s own servants approve of this move. In 18:7–8, Saul is angry when he hears the women singing that David is ten times more successful in battle than Saul. The NRSV translates this saying as “displeasing” to Saul (18:8), but the Hebrew words literally say that it was “evil in Saul’s eyes.” 18:9 tells us that Saul “eyed David” from that day on.

In 18:10–11, when the evil spirit from God rushes upon Saul, Saul throws his spear at David but is unsuccessful in his attempt to “pin David to the wall.” 18:12 tells us that Saul is afraid of David and gives us this reason: “because the LORD [is] with [David] but had departed from Saul.” Therefore, Saul sends David away in 18:13. When Saul sees David’s continued success in 18:15, Saul is fearful [see Author’s Note 4]. In 18:21 and 18:25, we are told that Saul plans to let the Philistines kill David, but when that does not work, Saul realizes again that “the LORD [is] with David” and that his own daughter Michal loves David (18:28). Saul grows even more afraid of David and becomes his enemy (18:29). 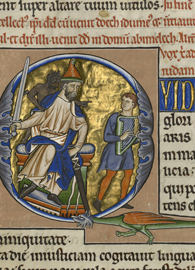 The story of Saul’s daughter Michal, who loves David (a fact that is repeated in 18:20 and 18:28 [see Author’s Note 5]) is interspersed with these descriptions of what Saul thinks, feels, and does regarding David. In fact, Saul attempts to use his daughters in his plan to have the Philistines kill David. Saul’s elder daughter, Merab, is mostly a parenthesis in the story (1 Sam 18:28), but when Saul hears that Michal loves David, Saul asks David for a bride price of one hundred Philistine foreskins (18:25). Because men typically do not willingly give over their foreskins, Saul reasonably assumes that David will die in his attempt to gather such a wild dowry. But David is successful in this endeavor, as he has been in all others, and Saul gives him Michal as a wife.

In fact, whenever Saul sends David away throughout chapter 18, David becomes even greater. Everything that David does brings promotion and glory, but the narrator is explicit about the fact that this happens “because the LORD [is] with him” (18:12, 14, 28). David’s success is from God.

After the Philistines do not kill David, 19:1 explains, “Saul spoke with his son Jonathan and with all his servants about killing David.” Once again Jonathan’s love for David leads to action: Jonathan warns David and then intercedes with his father for David, ultimately persuading Saul to vow not to kill David (19:4–6). That vow, however, only lasts until the evil spirit comes upon Saul again. And yet again, Saul tries unsuccessfully to throw spears at David (19:9–10).

Michal then is the one whose love for David causes her to act. She helps David to escape from Saul, lowering him down the window and placing some sort of household idol in David’s bed to make it look as if David is there (19:12–13). When Saul’s messengers come for David, Michal tells them that he is sick and then lies to her father about how David got away (19:17). Certainly that lie was a self-protective measure, because what Michal did placed her at risk.

From his home, David goes to Samuel’s hometown of Ramah, where he stays with Samuel. Saul sends messengers to get David, but the spirit of the LORD comes upon those messengers and they fall “into a prophetic frenzy” (19:20). This happens three times, until Saul himself goes to Ramah and also falls “into a prophetic frenzy” (19:23). It is worth noting the different ways that the spirit of the LORD acts: not only as evil, but also as protective, falling on the messengers and Saul so that they do not capture David. Additionally, this is the second time in Saul’s story that he is referred to as being “among the prophets” (19:24); the first is when he is anointed in 1 Samuel 10:10–13.

Because Saul is at Ramah, David flees. David goes to meet Jonathan, seeking help by asking his counsel (20:1). Jonathan apparently has not heard about his father’s attempts on David’s life, and he is incredulous at the news (20:2) but willing to do whatever David wants (20:4). David asks Jonathan to find out what Saul intends.

Jonathan swears that he will find out David’s status in his father’s court, and the two come up with a plan for Jonathan to communicate the news to David (20:11–22). In addition to making a plan, they also make another covenant (20:16). What this covenant shares with the one made in 18:3 is that Jonathan again is named as the subject who makes the covenant. What is different is that now Jonathan makes a covenant not only with David, but with David’s entire house.

While David is the one who is in immediate danger from Jonathan’s father, Jonathan can imagine a future in which his own descendants may be in danger, so Jonathan asks David to “never cut off [his] faithful love” from Jonathan’s house and descendants (20:15). The Hebrew word ḥesed is difficult to translate adequately; it is often used to describe God’s love and devotion to Israel, but has also been translated as “loyalty,” “steadfast love,” “loving-kindness” or “mercy.” In fact, in 2 Samuel 9, David will seek out Jonathan’s surviving son, Mephibosheth, in order to show him ḥesed for Jonathan’s sake.

Jonathan discovers that his father indeed seeks to kill David. The reason Saul gives his son is almost prophetic; he says, “As long as the son of Jesse lives upon the earth, neither you nor your kingdom shall be established” (20:31). Jonathan has already accepted — and even embraced — this fact, and he protests his father’s plan to kill David. Saul responds by throwing his spear at his own son. Jonathan leaves in anger and grief and goes to tell David that David was correct about Saul’s intent.

The final meeting between David and Jonathan is filled with emotion. David bows three times before Jonathan. The two kiss each other and weep, but the text tells us, “David wept the more” (20:41). Jonathan has the final word; he tells David to “go in peace” — a stark contrast to his father’s violence — and reminds him of the oath they both swore in the name of the LORD that the LORD will be between them and their descendants forever (20:42). Even as the two part ways, the LORD will guarantee that the covenant between them remains forever.

One of the early Christian desert fathers Abbot Pastor said, “If you have a chest full of clothing, and leave it for a long time, the clothing will rot inside it. It is the same with the thoughts in our heart. If we do not carry them out by physical action, after a long while they will spoil and turn bad” [see Author’s Note 6]. His extended metaphor is a way to say that love is not simply a feeling or a thought. Love and loyalty must be enacted, as they are by these children of Saul.

To that point, I recommend the thoughtful and thoroughly researched book by James E. Harding, The Love of David and Jonathan: Ideology, Text, Reception (Equinox, 2013). As in English, the word “love” in Hebrew has a range of possible meanings, from romantic or sexual love to political loyalty.

Covenants, of course, are important ways that God relates to humans throughout the Old Testament, but there are also some covenants between humans (e.g., Genesis 31:44; 2 Kings 11:4; Proverbs 2:17).

The Hebrew in 1 Samuel 18:28 reads, “Michal loved him,” but the Greek translation reads, “all Israel loved him.”