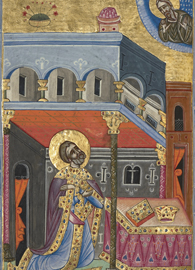 As I get older, I get an eye examination every year to make certain that my eyeglass prescription still works. I’m asked to rest my chin on a stand and peer through two circles while the technician clicks different optics into position. As she tests to see which combination makes things less blurry, she asks, “This, or this?” When the right combination is reached, I can see clearly. 2 Samuel 7 is a lens through which much of the rest of Bible should be viewed. In fact, the reason why this single chapter is the focus of an entire Lectio is that it is so important for understanding what will come later in the biblical narrative.

2 Samuel 7 is the chapter in which God makes an eternal, unconditional covenant with David, sometimes referred to as the Davidic covenant. Through the lens of this chapter, many subsequent events in the Bible become clearer, including why the united kingdom of Israel is divided into the two kingdoms of Israel and Judah in 1 Kings 11–12; the grounds by which the Israelites can protest the Babylonian Exile in Psalm 89 [see Author’s Note 1]; and why it matters that Jesus is a descendant of David.

A rough and ready definition of covenant is that it is a relational document between two people or parties. Different synonyms such as “agreement” or “contract” capture some of what happens in a covenant, but don’t quite cover the nuances of the word. There are a number of different covenants in the Old Testament between God and people; in addition to this covenant with David, God makes a covenant with Noah in Genesis 9, with Abraham in Genesis 12–17, and with the people of Israel via Moses throughout Exodus. God also promises “a new covenant” in Jeremiah 31:31–34.

In some ways, the content of 2 Samuel 7 is less dramatic than what happens in the surrounding chapters because what takes place are conversations between David, Nathan the prophet, and God. But the significance of those conversations is quite exciting, and the beauty of the language used is worth reading over and over again.

2 Samuel 7:1 gives us the setting: David has been crowned king over all Israel, is settled in his “house” in his capital city Jerusalem, and is enjoying a time of peace. At this time David gets the idea to build a temple for God. More specifically he wants to build a permanent residence for the ark of the covenant, which until this point has been housed in a tent [see Author’s Note 3]. When the ark was first built, the Israelites were in the wilderness on the way to the Promised Land, and thus it made sense to have a portable dwelling for the ark. Now that the tribes are united under one king, the ark can be placed in a stationary building. Also, it seems only fair! If the human king is settled in a home, the divine King — whose presence is connected with the ark — should likewise have an established location. David tells this idea to Nathan the prophet, who is supportive, saying, “Go, do all that you have in mind; for the LORD is with you” (7:3).

But that very night, God speaks to Nathan and tells Nathan to tell David “no.” David wanted to build God a house — a temple — but instead, God will build David a house: not a physical building, but a dynasty. People in the ancient world believed that if they did something for the gods, those gods would then do something for them. Maybe that was part of David’s thought, or maybe David thought he needed to try to repay God for what God had done for him. God, however, changes the equation from a transaction into an unmerited gift.

David need not build God a house in order for God to build David’s house. And David need not do something to pay God back before God does something more for David. This covenant, therefore, is an unconditional one. The temple will come later, and in fact will be built by David’s son Solomon [see Author’s Note 4], but at this point in the narrative Solomon has not yet been born! Solomon’s building projects in the future are in no way a prerequisite or a condition for what God promises David.

The order of God’s words to Nathan (which we are told Nathan faithfully speaks to David) is as follows: First, God explains that God never commanded any of Israel’s leaders to build a house. God seems to be just fine with the tabernacle. Second, in 2 Samuel 7:8–9 God reminds David of three things God has done for David in the past, saying, “I took you from the pasture, from following the sheep to be prince over my people Israel; and I have been with you wherever you went, and have cut off all your enemies from before you.”

Then, in 7:9–11, God gives three promises for the future, two of which are for David, and one of which is for Israel. God promises to “make for [David] a great name” (7:9) and give him “rest from all [his] enemies” (7:11). To Israel, God promises to “appoint a place” and “plant them, so that they may live in their own place,” where they will not be disturbed, nor afflicted by evildoers (7:10).

But the promises don’t stop there! Additionally, God declares that God will make a house for David by establishing a kingdom that will always be ruled by a descendant of David. This covenant is not only unconditional, but it is eternal; God uses the word “forever” three times to describe David’s kingdom (7:13, 16).

The unconditional nature of this covenant continues as God explains that it is not based on David’s descendants behaving perfectly. In fact, God says that when — not if! — the son commits iniquity, he will be punished, but God’s steadfast love will not depart from him as it did from Saul. Certainly Saul’s name is a sobering reminder of what can happen to a kingdom and to a king, but it also clarifies how gracious this promise is.

David’s prayer in response to God is an interesting blend of humility and boldness. It may be that those qualities feed each other, and it is because David is humble that he can also be bold. David begins with a question: “Who am I, O Lord GOD, and what is my house, that you have brought me thus far?” (7:18). As mentioned previously, it was Saul who came from a wealthy family, while David’s family was relatively poor and common. But as Hannah’s song proclaims, God brings down those who are in high places and raises up the lowly (1 Samuel 2:7–8).

In 7:25, David switches from praise to petition, going so far as to tell God, “as for the word that you have spoken concerning your servant and concerning his house, confirm it forever; do as you have promised.” This is where David’s boldness comes in: He continues by saying that when God does these things, God’s name “will be magnified” (7:26). But David also acknowledges that it is because of God’s promise to build David a house that David has found the courage to pray this prayer. David ends his prayer with the hope that it will please God to bless David’s house (7:29).

As mentioned before, this covenant that God makes with David helps us better understand other events in the Bible. When the foreign wives of Solomon turn his heart away from God in 1 Kings 11, God punishes Solomon by tearing the kingdom away from him. But God makes two concessions: First, God will not do this in Solomon’s lifetime, and second, God “will not […] tear away the entire kingdom,” but will give one tribe to Solomon’s son to rule (1 Kings 11:12–13). Both of these concessions are made “for the sake of [God’s] servant David” (11:13) and the promise God makes to David in 2 Samuel 7. Therefore, when the united kingdom of Israel is divided into the separate kingdoms of Israel and Judah after Solomon’s death, it is because of God’s covenant with David that Solomon’s descendants continue to rule in the southern kingdom of Judah. Even after the kingdom divides, there is still a Davidic king ruling on the throne.

But the Babylonian exile (2 Kings 25, etc.) calls God’s promise into question. When the Babylonian empire conquers the capital city of Jerusalem, destroying the palace and the temple and carrying the king off to Babylon, there is no longer a Davidic king ruling in the land. Did God forget God’s promises? On the basis of God’s promises to David in 2 Samuel 7, the people lament and call God to remember and make good on what God said God would do (Psalm 89, etc.). When Isaiah 11:1 describes the shoot that will come from the stump of Jesse, it is referencing 2 Samuel 7 and the promises that an eternal kingdom will come from Jesse’s son David.

When the people are returned to the land after the end of the exile, one of David’s descendants, Zerubbabel, gets appointed as a governor. This is good, but it’s not quite the kingship that God had promised. Again, based on what God said to David in 2 Samuel 7, the people of Israel continue to hope and long for a king from the line of David to rule over them. At the time of Jesus’ birth, Herod is ruling, but Herod is not from the line of David, which is why he tries to kill Jesus. Based on 2 Samuel 7, Herod knows that a descendant of David should rightfully be on the throne. And one reason the Romans crucify Jesus is that he is a descendant of David; the words hung over his cross identify him as “the King of the Jews” (Matthew 27:37, etc.).

When God makes his covenant with David, God says regarding David’s offspring, “I will be a father to him, and he shall be a son to me” (2 Samuel 7:14). This is language typically used in the ancient world to express the special relationship between a god and the king; the king was understood to be adopted by the god (cf. Psalm 2:7; 89:26–27). Christians confess that Jesus is the only begotten Son of God, the Messiah, the ultimate Davidic King whose kingdom is eternal.

The psalm does not specifically reference the Babylonian Exile, but that is the context in which the psalmist reminds God of the covenant God made with David in verses 21–38, and then questions how long God will hide God’s face (Psalm 89:47) and where is God’s steadfast love of old (Psalm 89:50).

Other human covenants include the one made between Abraham and Abimelech in Genesis 21, and between Jacob and Laban in Genesis 31.

More precisely, the ark has been in a tabernacle.

In the books of Chronicles — texts written about the same time as those in Samuel–Kings — there is another answer as to why God doesn’t want David to build the temple. 1 Chronicles 22:8 has God explaining to David, “You have shed much blood and have waged great wars; you shall not build a house to my name, because you have shed so much blood in my sight on the earth” (cf. 1 Chronicles 28:3). God wants a man of peace, not war, to construct the temple. Solomon does not fight in wars himself, and his name is derived from the word shalom, or “peace.”