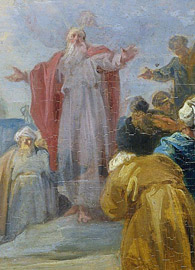 The story starts with a command to a select group of people to go up to the mountain: Moses, Aaron, Nadab and Abihu (the two sons of Aaron; compare Exodus 6:23), and 70 [Author’s Note 1] of the elders of Israel (Exodus 24:1). But within the first two verses there is a clear contrast between coming up to the LORD and coming near to the LORD. Only Moses can do the latter; the others are to keep their distance. If the elders are distinct from the people (who remain at the foot of the mountain), Moses is distinct from the elders. This is a theme that will be repeated throughout the passages we will read this summer.

Notice the people’s response to the LORD’s words and ordinances in 24:3. After Moses has told them “all the words of the LORD, and all the ordinances,” “with one voice” they agree. Then Moses writes it down so that they have it in writing, something that is typical of treaty documents in the ancient Near East. It has been suggested that Moses sets up the pillars to act as witnesses to the treaty, similar to the stone that Joshua sets up as a witness in Joshua 24:27.

The altar that Moses builds is used to sacrifice oxen, as offerings of well-being. Leviticus 3 gives more details about that type of offering, which typically is not used for expiation, but tends to be spontaneously motivated.

Offerings of well-being also allow the people to eat the meat of the animal sacrificed. In Exodus 24:6-8, we read that the blood from these animals is collected. Half of it is dashed on the altar, while the other half gets thrown on the people. Some commentators suggest that the altar is representative of God, which would mean that the blood of the covenant is put on both God and the people.

In other words, both parties are responsible for keeping the covenant (compare Hebrews 9:11–22). This gruesome act was a way to literally seal the covenant in blood. Though the people spoke their words of assent a second time after Moses had read the written words to them, the covenant is made real by words and the concrete action of putting blood on them. The second time that the people say, “All that the LORD has spoken we will do,” they add the promise, “and we will be obedient” (Exodus 24:7; compare 24:3).

After the covenant is sealed, Moses, Aaron, Nadab and Abihu, and the 70 elders go up to the mountain. On the one hand, the text is incredibly blunt, “and they saw the God of Israel” (24:10)! But, on the other hand, the actual description of what they see is very careful. Verse 17 refers to “the appearance of the glory of the LORD” as being “like a devouring fire on the top of the mountain in the sight of the people of Israel.” We hardly get a specific image of God from such description. Even when the select number see God, there are plenty of similes that move away from too much concrete imagery: “under his feet there was something like a pavement of sapphire stone, like the very heaven for clearness” (24:10).

In fact, it seems as if Moses, Aaron, Nadab and Abihu, and the elders see only God’s feet, and nothing more. There are references to a sapphire stone in Exodus 28:18, Job 28:6 and 16, Isaiah 54:11, and Ezekiel 1:26, but those seem to be referring to a lapis lazuli, while the description in our text is of something blue, but clear. It is as if to suggest that what they saw was beautiful, but of a beauty beyond our concrete imagination.

After they eat and drink, the party presumably breaks up. Moses alone is to proceed up to the mountain and wait for God, who will give him the stone tablets on which God has written the laws (Exodus 24:12). Still, others are mentioned — Joshua, who is identified as Moses’ assistant; the elders; Aaron; and Hur [Author’s Note 2].

Moses’ instructions to the elders carry a weight of foreshadowing: he tells them to wait for his return, but if there is a dispute, they can bring it to Aaron and Hur. Actually, the text literally says, “wait for us until we come to you again” (Exodus 24:14, emphasis mine), but then only Moses goes up to the mountain (24:15, 18). It appears as if Joshua remains somewhere between the people at the base of the mountain, and Moses and God on the top (compare Exodus 32:17). Indeed, Exodus 32 will give us the return of Moses and Joshua to the Israelite camp, but Aaron will not prove to be the substitute for Moses that one hoped he would be. 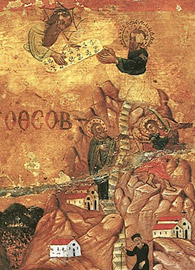 It is noteworthy that Moses has to wait for six days before he hears from God on the seventh day. The people had to only wait three days before they witnessed the divine presence in Exodus 19:11. God does not speak right away. We are not told what Moses does during those six days of waiting: some speculate that he was purifying himself in preparation to encounter God. Perhaps this, too, was a time when Moses had to have faith that God would do what he said.

Exodus 24 is, overall, a fairly brief story, but is profoundly important for Israel’s story as a whole. It tells us that the people — apparently willingly — accept the terms of the covenant with God. Twice they affirm that they will do all that God has spoken. The covenant is sealed in blood — representing life — and is to be upheld by both covenantal partners. God is witnessed to, visibly, but also with some distance. And Moses is singled out as the one who is invited to come into God’s intimate presence.

This story also finds resonance in the New Testament story of the transfiguration (Matthew 17:1–9; Mark 9:2–10; Luke 9:28-32), especially as Matthew and Mark specify that it was “six days later” (Matthew 17:1; Mark 9:2). Peter’s desire to build tents so that they can remain up there is significant in light of what is to come in Exodus. For as Moses remains on the mountain, for 40 days and 40 nights, things back in the camp will not go so well.

Seventy was a full complement of elders. Compare Exodus 1:5.

Hur is introduced in Exodus 17 as the one who helps Aaron hold up Moses’ arms during the Israelite battle against the Amalekites. He is also the grandfather of the artist Bezalel, mentioned in Exodus 31:2.