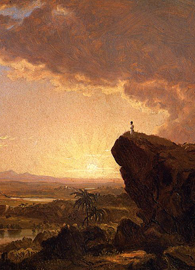 With these chapters, not only Deuteronomy but the entire Torah ends. As we come to the conclusion of our selections from Israel’s story, we look forward to the book of Joshua, which will be the focus of the next Lectio series.

Moses also looks forward, attempting to prepare the people for a future in which he will no longer be their leader. He announces Joshua as his successor (31:1–8, 14–15, 23), but also gives the people the law, which will help them face what is to come. Moses writes down a copy and gives it to the priests and elders (31:9), then gives specific instructions for its regular public readings, so that the generations to come may hear it and learn to obey God by following the instructions (31:10–13).

These two authorities that follow Moses — Joshua and the written law — illustrate the need for balance between charismatic leadership (Joshua gets filled with the spirit of wisdom in 34:9) and the authority of the book. God is then the one who appoints and instructs Joshua (31:14–15, 23). Both Moses and God encourage Joshua to “be strong and courageous” (31:6–7, 23), a rallying cry that will be repeated in the first chapters of the book of Joshua.

A note of pessimism is introduced as God tells Moses that the Israelites will rebel against God in the future and be punished severely (31:16–21). Up until this point in the book of Deuteronomy, Moses had warned the people against disobedience, but he never preached that their sin was a given. God then commands Moses to write a poem that will testify as a witness that God had treated Israel with justice, but Israel betrayed God (31:19, 21).

After the poem in Chapter 32 and Moses’ blessing in Chapter 33, we pick up the story again in Chapter 34, which tells about Moses’ death. Before Moses dies, God shows Moses the entire land. Chapter 34 also gives us the detail that no one knows where Moses was buried (34:6).

Some explain that his grave site was kept secret to prevent people from making it a shrine and even worshipping Moses’ spirit. The rabbis understood that it was God who buried Moses, and God alone knew the location. The book of Deuteronomy concludes with two verses that eulogize Moses by describing his incomparability as a prophet — because the Lord knew Moses face to face (34:10) — and also the incomparability of the signs and wonders God had sent Moses to perform in Egypt and before all Israel (34:11–12).

The book of Deuteronomy can be understood in a number of ways as a “boundary” document. It is set, geographically, on the boundary of the wilderness and the Promised Land. It marks the literary boundary between the Torah and the historical books that follow (or, in the Jewish canon, between the Torah and the Prophets). It takes place on the boundary of past and future: frequently events from the Exodus and beyond are remembered and revisited, but over and over again the emphasis is on the relevance of those for now and for the future (compare Deuteronomy 5:3).

Hearing and obeying have been important commands in the book of Deuteronomy, as was indicated in Deuteronomy 6:3–4, as well as the commands in Chapter 31 for the public reading of the law, “that they may hear and so learn to fear the LORD your God and observe faithfully every word” (31:12). But another key theme in Chapter 34 is that of sight.

The chapter ends by remembering the wonderful things that Moses did literally “in the sight of all Israel” (34:12). Before Moses dies, he ascends to the summit of Mount Pisgah, the same location where Balaam was taken by Balak (Numbers 23:14). Balaam was able to see only part of the Israelite camp, but we are told that — on the mountain this time — God showed Moses the whole sweep of the Promised Land.

Despite Moses’ age of 120, we are told that his eyesight is unimpaired (34:7), so we trust that he got a good look at the land that he was not permitted to enter. Indeed, there is something that could be melancholic about the end of Moses’ story. The Israelites mourn for him as long as they did for Aaron (Numbers 20:29), honoring him with their grief for 30 days. The eulogy sings Moses’ praises as it describes how there is still none like him. But the lasting image of Moses, before his death, is of a man allowed to see the land — but nothing more.

“Sight” — or, more precisely, the issue of lack of sight, or of things not seen — comes up in a couple of New Testament texts: in John 20:29, Jesus tells Thomas, “Blessed are those who have not seen and yet have come to believe.” 2 Corinthians 5:7 encourages us to “walk by faith not by sight.” And Hebrews 11:1 defines faith as “the assurance of things hoped for, the conviction of things not seen.” These verses mean that despite the melancholy we may feel because Moses only saw the land, we nonetheless must not underestimate the significance of the gift Moses receives by actually seeing the Promised Land. Just the vision must have left him trembling. We, too, may receive such glimpses in our own lives, which can inspire us. Even if we do not see the promises fulfilled, we can have faith that God’s vision will ultimately be realized.

6 Comments to “Conclusion — Seeing the Promised Land: Deuteronomy 31 and 34”