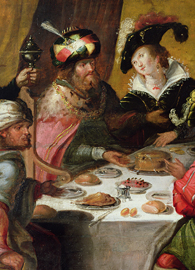 Although this week’s Lectio passage does not open with “Now concerning,” Paul most likely is still responding to concerns raised by the Corinthians. In fact, two concerns are addressed by Paul in this passage, and both have to do with proper behavior in the context of worship. The first (1 Corinthians 11:2–16) seems to be a matter of “manners;” the second (11:17–34) a matter of “morals.” We will examine each concern in turn.

You most likely know of the Rorschach inkblot test. Created by Swiss psychiatrist Hermann Rorschach in 1921, the test presents subjects with 10 ambiguously shaped inkblots. Subjects are then asked to describe what they see. The inkblot functions as a “blank slate,” onto which subjects project their thoughts, beliefs, and perspectives.

Why mention this? Well, I am convinced that 1 Corinthians 11:2–16 should carry a warning label: “The section you are about to read is the Rorschach inkblot of Paul’s letter to Corinth.” The text is ambiguous and complex. As a result, interpreters have made all kinds of claims about what this text teaches. [see Author’s Note 1] As your guide, my goal is to help you notice the ambiguities and offer a possible path through them.

The specific issue seems fairly clear: How should church members, male and female, “dress” when they pray and prophesy in worship services? (11:5) Paul mentions men’s attire (11:4 and 11:7), but mostly to show the difference he expects between men and women.

It appears from the discussion about shaved heads (11:5) and long hair (11:14–15) that Paul’s primary concern is how women are wearing their hair — “tied up” or “let down.” Paul is convinced women should have their hair “tied up” in worship. He appeals to nature, theology, and customary practices to persuade his readers.

The argument from nature. Arguments from nature move from “the way things are” to “the way things should be.” Paul essentially makes this argument (11:14–15). He finds it natural for men to have short hair and women to have long hair. To reverse this natural condition would be shameful and degrading to men and women. Paul believes it blurs the boundaries between men and women and deprives women of their natural head covering.
We might say it is “natural” to make arguments from nature, but they carry a two-fold risk.

For example, facial hair may seem “natural” for men, but in some ethnic groups men grow very little facial hair (Risk #1). If a man can grow facial hair, should he not shave in order to preserve his natural state? Few would make that case (Risk #2).

Theological arguments also carry some risk, and Paul seems to recognize it. Paul’s primary concern is preserving a symbolic distinction between men and women in the context of worship. He appeals to a biblical story that supports his point, yet makes no mention of God’s creating “humankind in his own image … male and female created he them.” (Genesis 1:27)

This account of the first humans would provide a corrective to Paul’s sense of creation’s order. Interestingly enough, Paul seems to recognize the need for a corrective, because in 1 Corinthians 11:11–12 he says, “Nevertheless, in the Lord woman is not independent of man or man independent of woman. For just as woman came from man, so man comes through woman; but all things come through God.” Life “in the Lord,” not “creation order,” is Paul’s primary orienting concern in these verses. “In the Lord” there is equal standing and mutuality between women and men. Though he finally wants to maintain a distinction between men and women in worship and even offers a theological claim in support, Paul seems to recognize that “in the Lord” hierarchy may not have the final word.

The customary practice argument. Perhaps this diffidence in Paul is evident in his closing argument, which is really not much of an argument. Paul simply says, “[I]f anyone is disposed to be contentious — we have no such custom, nor do the churches of God” (11:16). The word for custom in Greek is synetheia, best translated “customary practice” – a matter of manners.

Think of that common parental explanation to a child, “Honey, that’s just the way we do it in our family!” Such a claim does not inspire confidence that the parent is speaking an absolute truth intended for all time!

If wearing a covering in worship was a matter of manners, Paul’s next concern is clearly a matter of morals. The issue is serious enough to earn Paul’s rebuke (11:17). Their behavior demonstrates contempt for the church and humiliation towards church members (11:22). Paul is convinced the behavior has brought God’s judgment on the church (11:29–30).

What moral offence has Paul fired up? Basically, some Corinthian believers were charging to the front of the food line at the Lord’s Supper. Here’s the story.

Contrary to typical practice today, the Lord’s Supper in Paul’s time was a “full-meal deal.” As a means of promoting community and sharing (Acts 2:42–47), churches practiced common meals. Think church potlucks! Church members would bring dishes to share. In the course of the meal, the Lord’s Supper would be celebrated. Because of the Corinthians’ abuse, we get a brief glimpse into the celebration (1 Corinthians 11:23–26), but Paul’s primary point was to correct the abuse.

The abuse seems clear. Some church members were arriving early with their food and drink. Rather than wait for everyone to arrive, these early birds started eating and drinking — and didn’t stop until the food was gone and some were drunk (11:21). As a result, late arrivals were left with nothing. We should note that “arrival time” probably intersected economic class. Those who could knock off work early were likely better off economically. Those who were servant-class and “on the clock” likely arrived later.

Paul closes the section with a practical solution that assumes the best about the cause of their misbehavior. Again, to paraphrase, “Look! If you are so hungry that you have to dive into the spaghetti before everyone arrives, eat a snack before you come together.”

Long hair. Head coverings. Pigging out at church potlucks. How can we connect to this portion of Paul’s letter? What imaginative work can we do to hear God’s word for our lives so that we can be strengthened to the end (1:8)? Let me suggest two phrases in this passage to ignite our thinking: “In the Lord” and “discern the body.”

Discern the body. Paul’s admonition to discern the body is essentially, “Pay attention!” Paul is convinced that careful attention to the effects of behavior will help the Corinthians see where their life together fails to embody the meaning of the Lord’s Supper. Are we paying attention to life in our local congregations? Are we discerning how to be the body of Christ?

A memorable claim for me was when a local pastor placed a full-page “advertisement” in my hometown’s daily paper to argue that all men should have crew cuts, since long hair was degrading. His “proof” was based in 1 Corinthians 11:2–16.

The claim that women should wear a head covering “because of the angels” (11:10) could count as a third theological argument. It surely held some meaning for Paul and the Corinthians, but its meaning is completely hidden to contemporary readers. It is therefore difficult to call it an argument.

There are no Greek words for husband and wife. Writers simply used the word for man (aner) or woman (gyne). The reader determined from the context whether the author had in mind a husband and wife or any man and woman. Paul’s “order” of creation claim in this passage seems to have men and women in mind, not husbands and wives.