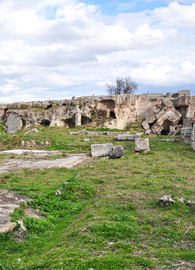 In our longest passage to date, Paul addresses a key question facing the Corinthian believers: Should we eat food that has been sacrificed to idols? A burning question for the Corinthians in more ways than one! Paul offers a long, complex response that relies heavily on past and current examples for guidance. In fact, Paul emphasizes examples in Scripture as God’s way to “instruct [the Corinthians], on whom the ends of the ages have come” (10:11).

Now, unless I am wildly mistaken, eating food sacrificed to idols is not a burning question Christians face today. Finding ourselves in this passage requires careful attention to the story and creative imagination to hear God’s word for our lives. It means seeing this issue as an example for us. We can simply update Paul’s statement in 10:11: “These things happened to [the Corinthians] to serve as an example, and they were written down [by Paul] to instruct us [readers today].”

In this week’s Lectio, we will pay careful attention to the question faced by the Corinthian believers and identify how Paul used examples to frame his advice to the believers. The Lectio will conclude by inviting us to consider God’s word for us through this intriguing, if unfamiliar, example of food sacrificed to idols.

Getting the Story Straight

We can only read Paul’s answer, so it takes some guesswork to determine precisely the situation faced by the Corinthian believers. What concerned them deeply enough to seek Paul’s advice and what did the Corinthians believe they should do? Our guesswork on the specific situation is improved when we learn about the culture and social practices of first-century Corinth. 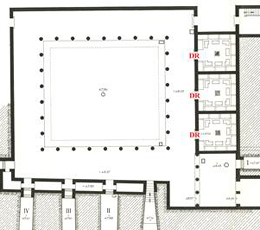 There were two prevailing forms of sacrifice at a temple:

We now turn to the three instructions we can glean from Paul’s counsel to the Corinthians.

In the first section of this week’s Lectio, 8:1–13, Paul tackles “the issue behind the issue” of eating food sacrificed to idols at a temple banquet (8:10). As the chart notes, some Corinthian believers saw no problem with this practice, based on their “special and superior knowledge” (8:7) that: 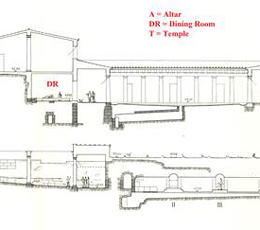 Paul does not deny these claims. They are clearly true. But Paul places another factor in the equation. In the language of psychology, there is an “intervening variable” between what we know and what we do. That variable is love. The risk of superior knowledge is pride. In Paul’s terms, “Knowledge puffs up” (8:1). Once again, we see pride at the root of troubles in Corinth (3:21, 4:6–13, 5:2, 5:6). We need to be clear. Love and pride are each other’s real enemies, not love and knowledge. Paul hammers away at the Corinthians’ pride in their knowledge. He reminds them that humility requires a cautious perspective on how much we know (8:2).

On the other hand, “love builds up,” because it pays attention to the effects of behavior on others. Love motivates us to exercise restraint when we know our behavior has an adverse effect on others, even when we know our behavior is “right.” (8:9). When we fail to exercise restraint and thus knowingly damage a fellow believer’s faith, we are sinning against Christ (8:12). Paul concludes the section by stating he would rather never eat meat again than destroy another believer’s faith (8:13).

Instruction #2: The Example of Sacrificing Personal “Rights” for Greater Purposes (9:1–27)

Paul’s conclusion in 8:13 apparently raised again in Paul’s mind certain criticisms of his ministry in Corinth. Paul made certain sacrifices to benefit the Corinthians; they interpreted those sacrifices as a sign of inferiority. A specific sacrifice Paul made was to exempt the Corinthians from supporting his ministry financially. Paul now addresses criticism of this decision by showing his action was an example of Christ-like living.

Paul opens this section, 9:1–27, by claiming he was within his rights to ask for financial support. Paul justifies this claim based on several factors:

Paul concludes this section by noting that the principle of sacrificing for the sake of a higher goal is embedded in the pattern of life. He appeals to the example of an athlete. If athletes sacrifice and exercise self-control in the pursuit of earthly glory, how much more should Christians be willing to sacrifice in pursuit of eternal glory (9:24–27).

In this section, Paul appeals to Old Testament stories to show the risk of pride [see Author’s Note 3]. In a complex and clever analogy, Paul compares the Israelites’ eating, drinking, and playing before the golden calf (10:7 and Exodus 32:1–6) to Corinthian believers’ eating and drinking before idols in temple banquets (1 Corinthians 10:21–22). Paul’s message is straightforward: If you think your spiritual knowledge or practices (baptism, Lord’s Supper) will protect you from displeasing God, think again! Look what happened to the Israelites. If spiritual pride makes you think you are standing, watch out that you do not fall (10:12).

With a proper dose of humility, Corinthians should recognize the temptation and flee from the worship of idols (10:14). They will see the absurdity of participating in a banquet for demons and the banquet of the Lord’s Supper (10:21). Such behavior can only provoke God’s judgment on the church (10:22).

In the concluding section of this week’s Lectio passage, Paul returns to core values Corinthians should employ in facing this particular issue. Since “the earth and its fullness are the Lord’s” (10:26, quoting Psalm 24:1), Corinthian believers are free to eat meat sold at the market or served in someone’s home. This liberty is constrained by love. Love builds up by seeking the good for others. If the Corinthians really seek to glorify God in everything they do, they will be following Paul’s example and the example of Christ by sacrificing personal advantage for the sake of others’ salvation (1 Corinthians 10:31).

This material is based primarily on Charles Talbert, Reading Corinthians: A Literary and Theological Commentary (Smyth & Helwys, 2002).

Recall from prior Lectios that written Greek had no quotation marks to show when an author was quoting someone else. In this form of argumentation, known as diatribe, the opponent’s claim is first quoted and then refuted. It is therefore essential to differentiate the Corinthian claims and Paul’s claims.

Paul’s use of these stories as examples (Greek: typos) shows his strategy for interpreting Old Testament texts for his readers. Paul “reads” them metaphorically and allegorically. He is more focused on the stories’ meaning and instructional value for his readers than on the original author’s meaning. This is why he can claim that “the rock was Christ” (10:4).