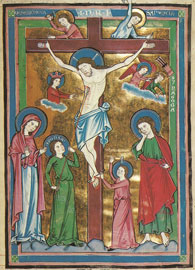 This week’s Lectio passage focuses on two concepts near and dear to the Corinthian troublemakers: wisdom and maturity. The passage divides naturally into two sections. In the first section, 2:6–16, Paul steps away from the specific concern he addressed in 1:10–2:5, namely, that divisions in the Corinthian church were caused by believers who were enamored with human wisdom based on status and power, rather than on God’s cross-centered wisdom. Paul offers an extended comparison between human wisdom and God’s wisdom. This complicated comparison, based on Scripture, analogy, and logic, aims at one purpose: demonstrating to the Corinthian believers that their behavior cannot be truly wise or truly mature.

To appreciate Paul’s argument in 2:6–16, we must understand irony, so let’s begin there. Irony is a word most often heard in an English literature classroom, but it was taken to the streets by Alanis Morissette’s 1996 smash hit song “Ironic.” The song offers some memorable pictures of irony:

We speak of irony when life turns out the opposite of what we would normally expect. As Morissette’s lyrics put it, “Life has a funny way of sneaking up on you.” This reversal of expectations catches us by surprise. A fire breaking out in a firehouse is ironic. O. Henry’s classic story “The Gift of the Magi” uses dramatic irony as the plotline. Jim sells his watch to buy Della a set of combs for her beautiful hair only to learn that Della has cut and sold her hair to buy Jim a chain for his watch.

Sarcasm relies on irony to criticize. When someone says, “That was a great job,” and uses a certain tone of voice, we know that the person really means, “That was a terrible job.” Tone of voice is often the verbal clue needed to recognize spoken ironic criticism, a reversal between what is normally meant by a statement and what is actually meant.

Since written communication does not convey tone of voice, recognizing ironic criticism in a written text is no easy task. While we can’t hear Paul’s tone of voice, I believe reading Paul’s claims in 2:6–16 as ironic criticism helps his argument makes sense. Paul is “sneaking up” on Corinthian believers who thought themselves both wise and mature. Paul will essentially agree with the Corinthian troublemakers’ view of wisdom in 2:6–16, but then make the ironic reversal by claiming in 3:1–4 that they lack the maturity to be wise.

By opening this section with a conjunction (de in Greek; best translated yet or but in English), Paul signals his intention to change directions. To this point, Paul has been hammering home the message that the gospel is not about human wisdom (1:17) but about the foolishness of the cross (1:18). Now he states, “Yet among the mature we do speak wisdom.”

What’s going on? What happened to his claims about the foolishness of the gospel (1:18), the “not many wise” Corinthian believers (1:26), and Paul’s own speech and proclamation not being words of wisdom (2:4)? Does Paul change his mind? Likely not! Instead, Paul uses irony to show the Corinthians how foolish they truly are.

Paul takes up two concepts important to the Corinthian troublemakers’ identity and the source of their pride: spiritual maturity and wisdom. Paul seems to be saying, “But if you want to talk about wisdom and spiritual maturity, by all means, let’s talk about them.” By shifting to their familiar language, Paul plays into their expectations and sets up the ironic reversal. “Okay, I’ll talk about these concepts,” Paul seems to say, “but only to show you why true wisdom and true spiritual maturity are the opposite of how you are thinking about them.” Paul teaches the true nature of wisdom and maturity by appealing to Scripture’s authority, by a carefully drawn analogy, and by simple logic. We will briefly examine each argument.

The scriptural argument. Paul’s first claim (2:7–9) is that true wisdom comes from God through revelation, not from human effort or clever rhetoric. Thus Paul agrees with the Corinthian troublemakers that there is special, spiritual knowledge accessible to “spiritual” people. Paul offers a cluster of scriptural phrases [see Author’s Note 1] to argue that this special knowledge — true wisdom — can come only from God, not from what human eyes see, what human ears hear, or what human hearts conceive. This true wisdom has been hidden, but is now known by God’s revelation through the Spirit, not by human inventiveness.

The analogy argument. Paul bolsters his claim that God’s wisdom can come only from God by an analogy in 2:11–12. The argument goes like this: Who has access to and knows best a person’s inmost thoughts — what a person truly thinks and feels? The answer is simple: the person herself or himself — the person’s spirit. By analogy, who has access to and knows best God’s inmost thoughts and feelings? Clearly, the answer is God’s Spirit.

The logical argument. Paul now connects the dots in 2:13–16. If true wisdom can come only from God and if God can be known only by God’s Spirit, then humans can be truly wise only by having God’s Spirit. Those who don’t have God’s Spirit just don’t get it (2:14)! Those who have God’s Spirit have inside information and therefore cannot be judged by outsiders (2:15) [see Author’s Note 2].

Paul concludes his logical argument by emphasizing that believers do know God’s mind/spirit, because they have the mind/spirit of Christ (2:16). Notice Paul’s subtle shift from third person in 2:14–15 to first person in 2:16. Paul acknowledges that spiritual people see truths unspiritual people don’t. By using “we” in 2:16, Paul acknowledges that the Corinthian troublemakers are “spiritual,” since they have the gifts of God’s Spirit. But Paul also asserts that he, too, possesses God’s Spirit. To have God’s spirit is to have the mind of the Lord; the mind of Christ (2:16).

What is the mind of Christ? Nothing but the cross (2:2)! And so Paul completes his ironic reversal on the topic of true wisdom. True wisdom is found in the cross. Since Corinthian believers were not seeking wisdom in the cross, they could not be truly wise. Since they were not truly wise, Paul could not speak to them as mature believers. In 3:1–4, Paul picks up the second reversal and simultaneously goes back to the specific problem within the church — division within the body.

People often use both wisdom and maturity to claim an inside track on truth. Both “Oh, you are just naïve” and “You are just too young to understand” are ways to say “I know; you don’t.” Having dismantled the Corinthian believers’ claim to being wise, Paul now dismantles their claim to being mature. Paul does this by making two basic points. First, Paul links wisdom and maturity.

Paul signals this connection by beginning 3:1–4 with, “And so ….” If a person isn’t wise, the person cannot be mature. Paul has shown that the Corinthian troublemakers lack God’s true wisdom, so they cannot be considered mature. Second, the Corinthian troublemakers’ immaturity is evident in the effects their behavior have on the congregation. Petty jealousies and quarrels are the marks of immature, childish behavior, not mature, adult behavior (3:3).

Paul now moves back to the topic of factions. The problem of factions within the church, which opens Paul’s letter (1:10–17), is evidence that the Corinthian believers lack maturity. No punches are pulled in Paul’s assessment of their maturity. The Corinthians are infants, people of the flesh, and not ready for solid food. They can be fed only milk, which Paul is about to feed them.

Paul is now ready to give them a better way, a more mature and a wiser way, to understand the distinctive work of Christian ministers (like Apollos, Peter, and Paul himself) within the body of Christ. But that is for our next time together!

The quote does not come from any single text. Paul introduces the quote with, “as it is written,” a phrase he uses only when referring to Scripture. Isaiah 64:4 comes close to Paul’s statement, and is therefore the most likely biblical source for his quote.

We must remember that Paul is expressing these ideas to make a point. The idea that spiritual people “are subject to no one else’s scrutiny” should not be used as a universal claim that no one can judge spiritual people or hold them accountable. The whole point of Paul’s letter is to hold the Corinthians accountable for behavior that is destructive to Christian unity.