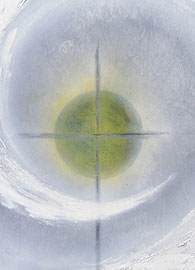 Everyone wants a healthy church. Surveys, resources, books, and websites abound on the topic, ready to dispense ideas, materials, and advice for creating and sustaining healthy churches. No one wants to see a church sick or dying. Well, it was not much different 2,000 years ago.

When Paul learned the Corinthian church was “not feeling well,” he wrote 1 Corinthians, hoping to nurse it back to health. Recall from last week’s Lectio that this was not his first letter to the church. Paul had earlier written the Corinthians suggesting they “quarantine” themselves from sexually immoral people (1 Corinthians 5:9–13). Now a delegation has shown up on Paul’s doorstep with news of additional health problems in the church. It’s not the news Paul wanted to hear.

From a medical perspective, three outcomes are essential for a person to overcome illness and return to health:

In this week’s passage, 1 Corinthians 1:10–2:5, Paul identifies the Corinthians’ fundamental “disease,” diagnoses its root cause, and maps a treatment plan for a cure. Paul does this in four distinct, but connected, sections.

Paul does not get to examine the “patient” in person. Recall from last week’s Lectio that Paul is in Ephesus when he writes this letter. While in Ephesus, a group associated with the Corinthian church (known only as Chloe’s people) pays Paul a visit. They report to Paul that the church is “not feeling well.” Paul names the sickness after an opening appeal for agreement and unity (1:10). It is “divisions among you” (1:10) that result in disagreements, disunity, and quarreling (1:11).

The Greek name for the “disease” is schisma, the same term at the root of such English words as “schism” and “schizophrenia.” It carries a much stronger negative connotation than division. For example, no one raises his or her eyebrows at the National Football League and Major League Baseball dividing their teams into six divisions — nothing wrong with that. It would give us pause if we said the NFL and MLB teams were organized into six different factions. Hence, a better translation of schisma would be something like factions.

While not described in detail, three of the four factions Paul identifies were the result of church members who identified themselves with particular church leaders: Apollos, Cephas, and Paul himself.

We know Apollos came to Corinth after Paul (see Acts 18:24–28). His ability to powerfully defend the Christian faith in “the public square” earned him admiration among Corinthian believers. Cephas, of course, is the Apostle Peter. We have no evidence Peter ever visited Corinth, but 1 Corinthians 9:5 suggests the church was at least familiar with Peter’s ministry, even if it did not have first-hand knowledge. Paul provides no clues about how those who claimed “I belong to Cephas” separated themselves from other factions in the church.

The fourth faction Paul identifies is those who claim “I belong to Christ.” We do not know how Corinthian Christians used “I am of Christ” in these factional disputes. Perhaps it was claiming that Christ was one option among many leaders to follow. Perhaps it was simply a means of rejecting all human leaders. Either way, the disease is placing Christ over and against those who are called to lead the church.

Paul rejects all such factions. He makes his case tactfully by first rejecting those who claim “I am of Paul.” Paul argues that no one should claim allegiance to him, since he did not die for anyone and it was not “into the name of Paul” that people were baptized (1:13). In all Paul’s work among the Corinthians, his only goal was to proclaim the gospel of Christ. He had no desire to build a following!

The Diagnosis: Prideful Desire for Status and Power (1:18–20)

What caused the divisions at Corinth? A desire for status and power, not doctrinal differences, seemingly lies behind the divisions. This is an important distinction.

In 3:5–9, Paul sees his work and Apollos’ work as complementary and mutually beneficial to God’s purposes. If doctrinal issues were at stake, Paul would surely not speak so highly of Apollos’ work. When status and power are at stake, competition and territorialism take over, undermining the Gospel message. Paul highlights the battle by contrasting status and power with the message of the cross. The message of the cross is God’s great reversal. The cross is foolishness, which destroys the “wisdom” of the sage, the scribe, and the debater (1:20).

Sadly, we often see the same destructive desire for status and power today. At a macro-level, high-profile pastors, speakers, and writers seem quick to take jabs at other Christian leaders. Though often disguised as a fight for correct doctrine, one wonders whether the real issue is competition for speaking engagements, book sales, and “15 minutes of fame.”

At the micro-level, church members quarrel over the “right” way to worship, pray, or practice the Christian life. The quarrel often seems mostly about the power to get “my way” in matters that are not essential. If we don’t get our way, we “divide” by splitting the congregation or simply leaving. Notice the relatively low importance Paul gives to the Christian practice of baptism compared to proclaiming the gospel. Paul’s difficulty accurately remembering whom he had baptized (1:14–16) is perhaps his way of saying, “Look! This isn’t really that important. Why quarrel over it?”

Paul shows how the cross has been God’s plan all along to undermine the human desire for status and power. Paul knows that status and power are expressed differently. Jews look for signs of power [see Author’s Note 1], while Gentiles look for words of wisdom [see Author’s Note 2] (1:22). The cross offers neither. The cross fails as a sign for the Jews because it lacks clear evidence of God’s power at work. The cross fails as a word of wisdom because it lacks any sense of sophistication.

In the last two sections, 1:26–31 and 2:1–5, Paul offers two examples that aim to convince the Corinthians that his analysis is correct.

A Word to the “Wise” on Healing

In 2 Kings 5 we learn the story of Naaman, an army commander of the king of Aram. Naaman is a great man and a mightier warrior, but he suffers from leprosy. On the advice of an Israelite servant girl, Naaman travels to Israel in hopes that Elisha, a man of God, might heal him. Elisha tells him “Go, wash in the Jordan seven times, and your flesh shall be restored and you will be clean” (2 Kings 5:10).

Naaman becomes furious. He expected Elisha to do something spectacular — call on the Lord, wave his hand over the spot, and cure the leprosy (2 Kings 5:11). Until his servants talk some sense into him, Naaman is ready to go home without healing, rather than submit himself to a task he considers beneath his dignity and status.

How often do we refuse opportunities for healing because of pride? We face the same risk Naaman faced when we desire a “dignified” gospel. How is the desire for status and power expressed in our world and in our churches? What impresses us? Is it size, wealth, or production value? We do well to remember that status and power are human temptations that always run counter to cross-centered living. When we focus on signs of power or impressive words of wisdom, we lose focus on the cross as the true measure of God’s power and wisdom. May God grant us the humility to live by the “foolishness” of the cross.

In 1:19, Paul contrasts God’s way and human ways by quoting Isaiah 29:14. The historical referent in Isaiah was Israel’s military crisis with Assyria. In response to Assyria’s relentless attacks, Israel’s strategy was to rely on alignment with Egypt’s power, rather than relying on God’s power to rescue them. It seemed a wise strategy, but it turned out to be foolish.

The phrase in 1:17 is sophialogou, the “wisdom of word[s]”. The Corinthians would have admired philosopher-teachers who possessed the skills of making persuasive arguments, using clever, sophisticated language.