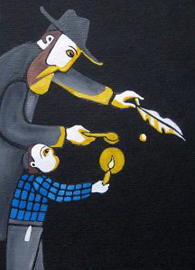 “Sex in the City” might be a catchy title for this passage, since two of Paul’s concerns involve sexual behavior, but it would divert our attention from the root problem Paul sees — failure of the community to live together in purity and truth (5:8) [see Author’s Note 1]. Paul points to this root problem by using a proverb and an analogy drawn from the Old Testament. Let’s start here and then work our way through the three major destructive behaviors Paul addresses in this passage.

Celebrating With the Unleavened Bread of Purity and Truth (5:6–8)

Paul anchors his call for action against a particularly egregious sin by a member of the congregation in an ancient proverb and a Passover analogy. A church member is living (sexually) with his stepmother. Paul wants him removed from church life and cites an ancient proverb to make his point. Just as “a little yeast leavens the whole batch of dough” (5:6), so the church’s failure to remove this man from church fellowship will eventually damage the entire church.

“Yeast” is the common link between the proverb and the analogy. Since unleavened bread (bread made without yeast) is one part of the Passover celebration, Paul continues his argument by noting two Passover practices. Passover celebrates God’s protection of the ancient Israelites from the last plague God called down on Egypt — the destruction of the firstborn of every family (Exodus 12–13). The Israelites were to place the blood of a year-old lamb on their door frame so that God would “pass over” their homes.

Paul reminds the church that Jesus is the “Passover lamb” sacrificed to keep them within God’s protective care (5:7). Paul also reminds them that each year the old yeast is thrown out and, for one week, only unleavened bread is eaten (5:8). For Paul, the church continues these practices by celebrating Jesus’ sacrificial death as the Passover lamb and by metaphorically “eating the unleavened bread” of purity and truth. Through their sexual and legal misbehavior, the Corinthians fail to practice purity and truth.

Paul connects purity and truth in addressing a specific case of sexual immorality. The case (5:1–13) involves a church member in a particularly sensational sexually sinful relationship: living with his stepmother. Paul notes this behavior would be condemned even by worldly Corinthians (5:1) — people not known for their strict standards of sexual behavior. The Greek term Paul uses is ethnos, translated as Gentile or pagan. It refers to all who live outside God’s covenant community of Israel. At its core, ethnos means “not Jewish.”

Yet as upset as Paul is about the behavior itself, he is even more aghast at the church’s response: indifference and even a measure of pride (5:2). Instead of indifference and arrogance, the church should “hand him over to Satan” (5:5). This stark image of discipline shows how important church life was to early Christianity. God’s protective realm is inside the church; Satan’s threatening realm is outside the church. The church is a lifeboat, essential to survival in hostile seas. It is not a nice club one can choose to belong to — or not! The Corinthian church could ill afford to be laissez faire about blatant wrongdoing in its membership.

Paul’s purpose in advocating severe discipline sounds highly punitive — “for the destruction of the flesh” (5:5). Does Paul want to see this person die? The Greek term is sarx, which is most often translated flesh. It can refer either to our physical nature (our bodily existence) or to our sin nature (our human proneness to wrongdoing). Context dictates which meaning should be applied. In this case, it seems unlikely that Paul is wishing the man dead; therefore, “destruction of the flesh” is better understood as “ending his sinful behavior.” Paul is hopeful that removing the man from fellowship will destroy his sin nature. As a result, the man will be “saved in the day of the Lord” (5:5).

Even our “live-and-let-live-as-long-as-no-one-is-harmed” culture would likely find this behavior shocking. Imagine the magazine headlines at the grocery store checkout counter: “Man’s son also his brother-in-law!” How could the Corinthian church have been proud of such behavior? The reason may be found in a phrase repeated twice in 6:12, “All things are lawful for me,” and in a phrase in 6:13, “Food is for the stomach and the stomach for food, and God will destroy both one and the other.” Paul seems to be quoting and then refuting these two claims. [see Author’s Note 2]

If these two claims represented the “knowledge of every kind” (1:5) that Corinthian believers possessed, perhaps they used this “truth” to tout their radical freedom from moral laws. If all things are truly lawful, Corinthian Christians could take pride in their freedom from basic laws of sexual behavior that even Gentiles recognized. If what we do with our bodies has nothing to do with our spiritual life, then we are free to do whatever we want with our bodies.

Paul, however, argues that the “truth” is more complex. Even if the basic claim were true, Christian behavior must account for whether behavior benefits the person and the community, and whether the behavior takes control of one’s life (6:12–13). Even if the spiritual life is not about what we put in our bodies [see Author’s Note 3], our bodies belong to God. Paul reminds the Corinthians that their bodies are the temple of the Holy Spirit (6:19), and it is unthinkable that believers would join the members of Christ with the members of prostitutes in sexual immorality (6:15). Believers are to glorify God in their bodies (6:20) by shunning sexual immorality.

The Effect on Filing Lawsuits of Not “Celebrating Purity and Truth” (6:1–11)

The problem of church members suing each other is the second topic on Paul’s mind. Once again, bad behavior is linked to bad theology, and the result is harm to life together. And once again, Paul’s concern is not only the behavior of particular church members, but also the entire church’s response to these behaviors.

Though we don’t know the details, we do know Corinthian believers were suing other Corinthian believers. These civil cases, evidently over minor matters (6:2), were being tried in Roman courts [see Author’s Note 4]. Paul finds this unconscionable. Note how he anchors his argument in the logic of theological claims. The Corinthians should know that they will someday be judging the world (6:2) and even angels (6:3). If this is their destiny, surely someone in the congregation should be sufficiently wise to judge a dispute between two members (6:5).

The very fact that church members are suing each other is a sign for Paul that something is already wrong in the church. While lawsuits may be about justice, they may also be about demanding one’s rights and getting one’s way. Because the Roman system of justice was notoriously corrupt, a lawsuit to correct a wrong often involved committing another wrong (bribing an official). When the wrong is trivial, Paul argues believers should choose to accept being wronged and defrauded (6:7). This is reminiscent of Jesus’ teaching in the Sermon on the Mount (Matthew 5–7). Disciples of Jesus must be willing to turn the other cheek and not defend themselves against lawsuits. By fighting wrongdoing with wrongdoing, Corinthian believers put at risk inheriting the kingdom of God.

It might be tempting to turn the issues Paul addresses into rules such as, “Christians must never take other Christians to court.” That may oversimplify the task of “eating the bread of purity and truth.” Even in today’s passage, Paul suggests that aggrieved parties have the option of appointing someone in the church as an arbiter (6:4) or simply letting themselves be wronged. (6:7) Celebrating purity and truth calls for discerning how to practice what we believe.

This week’s Lectio passage emphasizes this close connection between right belief and right behavior. Seven times in this passage Paul asks the Corinthians, “Do you not know …?” Paul shows how distorted beliefs lead to distorted behaviors in the Corinthian church. Sexual immorality and frivolous lawsuits threaten the church’s health and witness. A congregation’s identity and health depend on both true doctrine and pure living. Churches must attend to both sound doctrine and accountable behavior to sustain life together. While we may not face the particular issues Paul addresses in this passage, any congregation must be vigilant in knowing the truth and maintaining purity in the community.

The Greek word used in 5:8, eilikríneia, literally means “judged in light of the sun.” Equivalent English words include purity, sincerity, and genuineness. Most English versions translate eilikríneia in this verse as sincerity. Given the particular sin Paul addresses in 1 Corinthians 5, I believe purity conveys the meaning most clearly. I therefore use the phrase “purity and truth” in this Lectio.

Written Greek had no quotation marks to show when an author was quoting someone else. Because Paul qualifies these phrases (by saying “but not all things are beneficial” and “but I will not be dominated by anything” and “the body is … for the Lord and the Lord for the body”), the simplest interpretation is that Paul is quoting Corinthian claims about the freedom one has in Christ and that true spirituality does not concern what we do “physically.”

We already know that the Corinthians were prone to misinterpreting Paul’s teaching. Paul addresses one mistaken interpretation in 5:9–13. We also know that Paul did teach that “the kingdom of God is not food and drink but righteousness and peace and joy in the Holy Spirit” (Romans 14:17). Perhaps the Corinthian believers mistakenly assumed this meant that the spiritual life had no connection to bodily life.

Part of Paul’s issue with this behavior stemmed from the common knowledge that Roman civil courts were corrupt. The Corinthians should know that an “unbelieving” judge would not likely be looking for justice in a case, but rather for a “reward” from one of the parties for a favorable verdict. It is the moralcharacter, not the faith stance, of the judge that concerns Paul.