Today, young couples exercise great creativity to make birth announcements memorable. The pregnancy that led to our first grandchild was announced by his parents in a surprise visit — from Southern California to Seattle. After we’d caught our breath from their appearance at our door, the parents-to-be presented us with a pair of tiny moccasins symbolizing the baby to come.

Nothing, however, can top the unusual announcements Luke describes in his opening two chapters. But more about that in a moment.

The church’s season of Christmas, rather than being bound by a secular and commercial calendar, continues past the holiday into the season of Epiphany. Thus, in this Lectio, rather than putting Christmas away till the following December, we relive some of the warmth and joy of Luke’s great story and wonderful songs.

During the month leading up to Christmas, you’ve likely heard a sermon, a reading, or a song based on the Gospel of Luke. While Matthew’s gospel tells the story of Jesus’ birth more from Joseph’s perspective, Luke tells of Jesus’ birth from Mary’s. And it’s Luke who gives us the much-loved vision of angels, shepherds, and babe-in-a-manger that has shaped many of our beloved carols.

Before moving into the story, here are some introductory observations about the Gospel of Luke as a whole:

Half of Luke’s first chapter describes the remarkable birth announcement of John the Baptizer.

In Luke 1:5–25, a devout, older couple is going about their everyday lives. They’ve not been able to have children in a culture in which childlessness was shamed and mocked. The man, Zechariah, isn’t among the chief priests who lived in Jerusalem, but is of a lesser order of priests from the hill country of Judea. So when the time comes for him to serve in the temple, Zechariah likely expects to make the journey, render his service, and return home to his wife, Elizabeth. But, through an angel, God intrudes into the everyday life of this older couple.

From the angel, Zechariah hears that his wife will bear a son. He is stunned, and says to the angel, “How will I know that this is so? For I am an old man and my wife is getting on in years?” (1:18). Because Zechariah has a hard time getting his head around this amazing news, the angel strikes him mute — until Zechariah’s son is born.

The old priest comes out of the temple’s inner court and tries to explain to worshipers what has happened, but, as Luke says, “He kept motioning to them and remained unable to speak” (1:22). Zechariah goes home, breaks the news to Elizabeth, and watches mutely as she indeed begins to show signs of being pregnant. 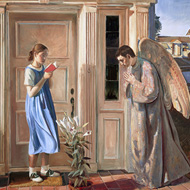 Next, Luke’s storyline moves to Galilee for another birth announcement (1:26–28). This time, an angel encounters a Nazareth girl, who is, like Zechariah, totally unsuspecting. There’s a tradition among the Greek Orthodox that the annunciation to Mary took place at the Nazareth spring, where girls like Mary would regularly come to collect the family’s supply of water. When I was in Israel, our guide took us to an ancient Nazareth church built over a still-gurgling spring, where we pondered the impact of God’s intrusion into the daily chores of a Galilean teenager.

Though only betrothed to Joseph, Mary is told, “You will conceive in your womb and bear a son, and you will name him Jesus” (1:31). Mary responds to the angel, “How will this happen since I haven’t had sexual relations with a man?” (1:34, CEB). Both Matthew and Luke make this matter-of-factly clear without belaboring or sensationalizing the issue.

These gospel writers are not making virginity morally better than marriage, or denigrating sex. They are simply reporting the miraculous conception of Jesus as a sign of God’s involvement. Of greater importance to Luke is who this baby would be.

He will be great and will be called the Son of the Most High .… He will reign over the house of Jacob forever, and of his kingdom there will be no end (1:31–33).

I used to expend lots of energy trying to prove why the so-called “Virgin Birth” had to be. But it’s increasingly clear to me that this is not about sex or science, but about a sign — a sign for all to see that this was not just another Galilean baby, but God in the flesh, with God the Spirit at work accomplishing God’s own purposes through an unsuspecting upcountry girl.

Mary’s remarkable response to God’s call is, “Here am I, the servant of the Lord; let it be with me according to your word” (1:38). While this is God powerfully at work, Mary is a willing instrument. For this we honor her as a most remarkable woman.

Two pregnant women, related to one another, one young and one older, meet at Elizabeth’s home in the hill country of Judea. With the baby leaping in her womb, Elizabeth is full of the Holy Spirit and erupts with loud, joyful song, blessing her younger relative (1:42–45). But the song we especially remember is Mary’s (1:46–55). We call it the “Magnificat,” after its opening Latin words, which are translated “My soul magnifies!”

While it is sometimes read solemnly and set to classical music, surely the “Magnificat” should be heard as an almost giddy, dancing overflow of a mind and heart schooled in her Scripture. Mary’s song, along with the other two songs of Luke 1 and 2, is filled with Old Testament allusions and quotations. Much of Mary’s song echoes the song of Hannah, mother of Samuel (1 Samuel 2:1–10).

This is a stunning, even revolutionary declaration of what kind of God has brought about Mary’s supernatural pregnancy. This is a God who has put down the proud rulers of this earth. “[H]e has filled the hungry with good things, and sent the rich away empty” (1:53).

Mary shares in common with Elizabeth the great dream of God’s ancient people, a dream that God would fulfill the promise to Abraham to bless the whole world through Abraham’s descendants, a dream proclaimed by the Hebrew prophets. For this to happen, the powerful of the world, such as Herod and Caesar, would have to be brought low, and humble people like Mary, Elizabeth, and their babies lifted high.

Zechariah, newly liberated from silence and “filled with the Holy Spirit” (1:67), praises God and blesses the child he has insisted be named John, not Zechariah as would be expected.

Take a moment to look back and reflect on a few points:

“In those days a decree went out from Emperor Augustus that all the world should be registered” (2:1), or “enrolled in the tax lists” (CEB). Now we meet Joseph, who is a descendant of David and thus required to make the 80-mile journey from Nazareth in Galilee to Bethlehem, “the city of David” (Luke 2:4), near Jerusalem. Historians puzzle over fitting this required registration into ancient records. What is clear is that, at the command of Caesar, world ruler of that time, Joseph and his pregnant, newly wed wife [Author’s Note 2] set out for Bethlehem, where the Son of God, ruler of another kingdom, would be born. These two powers and kingdoms, God’s and this world’s, have collided throughout history and still do.

Luke 2:8–20: The Most Famous Birth Announcement of All Time Comes to Sleepy Shepherds Outside Bethlehem

Shepherds, who heard the good news of a savior “born today in David’s city” (2:11, CEB), were not cuddly guys decked out in terrycloth bathrobes as in church Christmas pageants. First-century shepherds were poor, labeled unclean, and occupied lower rungs of the social ladder. But this greatest birth announcement of all time comes to them rather than to folks in Herod’s palace or in the high priest’s family in nearby Jerusalem. The theme of God revealing good news to the poor and outcasts continues.

Shepherds decide to go into town and see for themselves. They are told to look for “a baby lying in a manger” (2:12), a feeding trough for animals. Three times in Luke’s story the manger is mentioned (2:7, 12, 16). The shepherds find Mary, Joseph, and the baby in the ground floor of someone’s house, where animals are kept at night, instead of in an upstairs guestroom. [Author’s Note 3M] And, as they have been told, the newborn is “in a manger.”

Yes, a feeding trough was a humble place for the Son of God to be born. But a manger was also a sign to guide the shepherds to the child whose birth announcement they had so dramatically received. On their way back to their flocks of sheep, the shepherds gossip the good news through town.

Luke’s story of birth announcements also includes senior adults. In fact, Luke’s story runs the gamut of age and stage in life — from young Mary to an 84-year-old widow-prophet named Anna; from rowdy shepherds to Simeon, the elder Spirit-led watcher after the One promised by God. “The Holy Spirit revealed to him that he wouldn’t die before he had seen the Lord’s Christ.” (2:26, CEB)

Mary and Joseph bring Jesus to the temple for his eighth-day ritual of circumcision. The couple fulfills the requirements for sacrifice. In that setting, Simeon and Anna receive birth announcements leading them to praise God, and, in Simeon’s case, to offer the final song of this opening Lectio.

Master, now you are dismissing your servant in peace, according to your word; for my eyes have seen your salvation, which you have prepared in the presence of all peoples, a light for revelation to the Gentiles and for glory to your people Israel. (2:29–32)

Every year, Jesus’ parents would take him to Jerusalem for Passover. Now that Jesus is 12, they may also be celebrating Jesus’ bar mitzvah, when Jesus becomes a full member of the synagogue. Returning home, they mistakenly assume Jesus is in the pilgrim crowd. He is separated from them for three days, until they find the boy Jesus in the temple engaging in discussion with religious teachers. “Did you not know that I must be in my Father’s house?” Jesus tells them (2:49). Joseph and Mary don’t understand. Would we?

But the story of Luke 1 and 2 concludes with Mary “treasur[ing] all these things in her heart,” Jesus obeying his parents like any good Jewish child, and Jesus increasing “in wisdom and in years, and in divine and human favor” (2:52).

Mary and Joseph were probably legally married, but, as Matthew 1:25 puts it, Joseph did not engage in “marital relations with her until she had borne a son.”

The word often translated “inn” (2:7) has several possible meanings, the most suitable for this text probably being “guestroom,” as rendered by the CEB. Simple Palestinian homes of this era had only two rooms, one reserved for guests. The other was the family’s room, where the entire family cooked, ate, slept, and lived. At one end of this family room was a place where a cow, donkey, and some sheep would be brought in at night. A manger or feeding trough may have been built into the floor. For an extended and insightful treatment of where Jesus was born, see Kenneth Bailey, Jesus Through Middle Eastern Eyes (InterVarsity Press, 2008), pp. 28–32.

Back to Luke   Next Lectio>>

2 Comments to “Birth Announcements: Luke 1 and 2”