Are Any Among You Sick? James 1 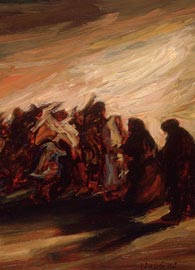 I’ve been ill the past few days. Nothing serious— just a really rotten head cold— but I’ve been surprised by how debilitating it has been. Between the cold itself and the medications taken to combat it, I’m left sluggish and staring like a zombie. Activities I do most days, such as reading and writing, are difficult if not impossible to pursue. Mostly I gape at the television, or sleep. I am in a fog. It is almost as though I forget who I am, what is important to me, and what I am here to do.

Then my children come home from school, my wife returns from work, and I am retrieved from the fog. As if I’m finally recognizing my reflection in a mirror, their presence enables me to remember who I am. I still feel awful, of course, but it is easier for me to “snap out of it.” A certain mental clarity is achieved: I have a place in this world, a role to fulfill, duties to complete. Time to get up off the couch and get to it!

A Wake-up Call for a Scattered People

The experience of reading the letter of James is akin to that of loved ones returning home to retrieve a sick family member from the stupor of illness. Indeed, the final words of the letter make this intent fairly plain: James writes to wake us up, to change our ways, to alter the way we think about ourselves and our world so that we will live more wholly into our Christian calling (James 5:19–20).

The mental “jarring” that initiates the wake-up process begins in the first verse. While we were able to identify the author of this letter last week (James, the brother of Jesus, head pastor of “First Church Jerusalem”), the address might leave us a bit bewildered. “The twelve tribes in the Dispersion” (1:1)? To whom in the world is this letter addressed?

The word “Dispersion” (or “Diaspora”) means “scattering”; in the Old Testament, the recurring use of this term refers to God’s punitive “scattering” of unfaithful Israel away from the Promised Land and into a life of struggle in exile among the nations of the Gentiles. [Author’s Note 1] This is, of course, precisely what happens in Israel’s history: the 12 tribes of Israel, once unified under a single kingdom, become first divided (1 Kings 11–12), then conquered and scattered among the nations (2 Kings 17, 24–25). By Jesus’ day, God’s marginalized, powerless people lived in the hope that one day the Lord would gather the 12 tribes together again as part of the great restoration planned with the arrival of the Messiah. [Author’s Note 2] Thus, while “the Dispersion” refers specifically to the world outside the Holy Land (and likely is to be taken that way here; see, e.g., John 7:35), it carries with it a figurative reference to the difficulty of living faithfully as God’s people when residing among foreigners in an alien land.

So James, head pastor of “First Church Jerusalem,” is writing to all believers living away from their “homeland” and therefore struggling to live faithfully in a foreign land among an alien people. This becomes obvious as the letter progresses: James’ readers are susceptible to the temptations (James 1:13–15) and deceptions (1:16) of the “world” (4:4–10), and may thus be led to “wander” (1:16; 5:19–20) after other allegiances. Hence, the first mental “jarring” some of us might experience as we read the letter: Is this really addressed to me? I love my country and honor my citizenship as an American! I’m not a resident alien, living in a foreign land, am I?

I say “some of us” because undoubtedly some of you reading do know what it is like to live as a “foreigner” in a strange land! Anyone who has spent significant time living in a different culture knows of the many difficulties one encounters, especially when it comes to knowing which habits and practices from home must be retained in order to keep one’s identity intact, and which can safely be left behind. James’ “ideal reader” is someone who understands herself to be a member of God’s people (i.e., “the twelve tribes”), who knows her citizenship lies elsewhere (i.e., she lives “in the dispersion”), and who knows she is in danger of losing her identity as she dwells in her current culture. If you don’t know this to be true about yourself as a Christian, well, James is about to try to convince you otherwise.

Rather than go verse by verse through the first chapter, I want to offer some general points to guide you in your reading. While most of the letter is made up of short sermons, Chapter 1 consists of a series of short sayings. As it turns out, the chapter can be viewed as a sort of table of contents introducing concepts that will be expanded later in the letter. The opening aphorism on being joyful in response to trials (1:2–4) uses key words that will come up again in the section on faith and works (2:14–26). The next aphorism, on “asking” for “wisdom” and not being “double-minded” (1:5–8) will find expansion in 3:13–4:10. And so on.

Next, we might note that the first chapter repeats words related to cognition and perception. Indeed, such words are repeated 17 times here and only eight additional times in the remaining chapters of the letter.

James wants to address how we think — about ourselves, about our world, and about how we ought to comport ourselves as God’s people residing in the Diaspora. Consider, expect, understand, know, be wise, and do not be deceived!

Another thing to note: the chapter is dominated by contrasts. It is as though two ways of living are being described:

This is a biblical way of thinking. Before they reached the Promised Land, Moses told the people of Israel,

See, I have set before you today life and prosperity, death and adversity. If you obey the commandments of the Lord your God that I am commanding you today, by loving the Lord your God, walking in his ways, and observing his commandments, decrees, and ordinances, then you shall live and become numerous, and the Lord your God will bless you in the land that you are entering to possess. But if your heart turns away and you do not hear, but are led astray to bow down to other gods and serve them, I declare to you today that you shall perish; you shall not live long in the land that you are crossing the Jordan to enter and possess. I call heaven and earth to witness against you today that I have set before you life and death, blessings and curses. Choose life so that you and your descendants may live … (Deuteronomy 30:15–19).

James seems especially interested in the contrasts between God and humans:

This contrast between a whole God and a divided humanity clarifies as the chapter moves toward its end. James wants us to know that God has provided us with an “implanted word that has the power to save your souls” (1:21).

The problem is, some believers think that simply being a hearer of the word will do the trick (1:22). No, it isn’t enough to hear the word; faith may come by hearing (Romans 10:17) but it most certainly won’t be retained if one doesn’t act on what one is told! Like one who looks in a mirror and then, walking away, immediately forgets what she looks like (James 1:23–24), so also is one who hears the call of the Gospel, says “Amen,” and then doesn’t actually live life accordingly — that person is actually dangerously divided and will not be able to retain her Christian identity over the long haul. When the opportunity arises — when the trial comes, when the call to serve arrives — that person will forget who she is and fail to respond as a Christian should. Conviction, James insists, must be connected to action. Failure to connect hearing and doing is an indication of conflicting allegiances, what James terms “double-mindedness” (1:8; 4:8).

The hammer falls in 1:26–27. Christian people who are all talk and no action, all creed and no deed, are simply deceiving themselves. Perhaps they heard Romans 10:9 (“because if you confess with your lips that Jesus is Lord and believe in your heart that God raised him from the dead, you will be saved”) out of the larger context of Paul’s letter and thought he was saying that saving faith could be attained simply by thinking and saying certain things. James insists that real Christians are people who actually follow the way of Jesus. Focusing particularly on two things (1:27), God’s people must:

Are any among you sick (5:14)? Better: are you, as I am, struggling with double-mindedness? Do you find yourself caught between conflicting “wisdoms”? The letter of James promises to bring healing to that which ails us. But be warned: the medicine James offers might not go down all that easily. It is often said that the Bible comforts the afflicted and afflicts the comfortable. Of all the New Testament texts, James may be the first one listed under the “afflicts the comfortable” label! But this is good discipline. Paul might instruct us in how to get saved, but James is going to teach us how to stay firmly planted in a saving relationship with God.

<<Previous Lectio   Back to James   Next Lectio>>

2 Comments to “Are Any Among You Sick? James 1”