Against Internationalism: The Remembrance of Israel’s Glory (Wisdom of Solomon 10:1–19:22) 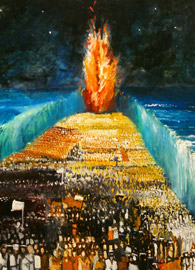 In Week 6 of this series, we saw that the early sages of Israel were “internationalists.” By this we meant two things.

It would be a mistake to conclude from this that they weren’t faithful Yahwists. Indeed, wisdom orthodoxy reflects many of the same assumptions about God’s providential care for, and sovereign governance of, the world that we find elsewhere in the Hebrew Scriptures. But precisely because the sages believed that Yahweh’s rule was universal, even if it wasn’t universally acknowledged, they were more open than many of their co-religionists to learn from Israel’s neighbors, at least on matters of daily life and interpersonal relations, though not on theology per se.

But therein lay a problem, which later Israelite sages identified and addressed. For, as we saw last week, the later sages were increasingly sensitive to the transcendence and inscrutability of God, and therefore increasingly convinced that any share of divine wisdom that human beings might acquire depended on divine revelation, not merely on the astute observation and shrewd analysis of human experience.

And presumably the self-revelation of the one true God would unlock the true meaning of the covenant relationship that God had established with his chosen people. So the later sages saw the need to connect their new understanding of wisdom with the “salvation history” of Israel. [Author’s Note 2] Today we shall look at how one of them did so.

Before moving to this, however, I want to share a story that may illustrate both the power and the limits of “wisdom internationalism.” Some years ago, I taught a seminary class on biblical ethics at Hope Africa University in Bujumbura, Burundi. One day, when we were studying the Hebrew Wisdom Literature, I led the class in a “pass the chalk” exercise. I asked them to think of proverbs they had learned as children. Then I asked each student to write one of those proverbs on the blackboard in his or her native tongue, to furnish an English translation, to explain its meaning to the class, and then to pass the chalk to the next student, who would the repeat the process.

When we were done, we had Kirundi, Kinyarwanda, Congolese, Luhya, and English proverbs scrawled on the board. Here are some of the best ones:

This exercise generated a lot of laughter and banter, partly over the earthy humor of many of the sayings, partly over the difficulties of translating them into idiomatic English, and partly over my feeble attempts to pronounce the words in the original languages. Yet the point of these sayings was immediately obvious to all of us, despite the great cultural and linguistic differences among us, and that testifies to the commonality of human experience.

But notice that there’s nothing explicitly theological about any of them. Nor is there any hint of the darker and more mysterious aspects of human experience — the meaning and purpose of life, the problem of evil, the specter of death. Before such questions, homespun proverbs, which every people, ancient and modern, has produced in order to mold the conduct and character of its young, must fall silent. Something more than conventional wisdom is needed to answer life’s deeper questions.

One ancient people, the Israelites, believed that such answers as human beings can ever give to these questions were to be found, not in daily experience, but in the astonishing history of their dealings with God. Israelite prophets and priests had maintained this view for centuries, but the credit for grafting it into the Israelite wisdom tradition goes, among others, to that Greek-speaking Alexandrian Jew of the first century B.C. who wrote the Wisdom of Solomon. [Author’s Note 3]

This author, like many other Israelite sages, liked to personify divine Wisdom, that is, to depict an attribute of God as if it were a concrete manifestation of God, and to endow this persona with distinctly feminine characteristics. Sometimes she is shown as a nurturing, protective mother, and sometimes as a chaste but alluring lover.

Why does “Solomon” suppress their names? Because he wants to give Lady Wisdom all the credit for the successes enjoyed by the heroes of Israel. “Wisdom protected the first formed father [Adam] …” (10:1). “Wisdom … recognized the righteous man [Noah] and preserved him blameless before God …” (10:5). “Wisdom rescued a righteous man [Lot] …” (10:6). And so forth. Additionally, he wants his readers to collapse the historical distance between their ancestors and themselves.

This literary maneuver parallels the standard Jewish practice of answering children who ask about the meaning of the Passover by insisting that it is we, not just our forebears, whom God delivered (Exodus 12:26; Deuteronomy 6:20–22). [Author’s Note 4] For “Solomon,” Lady Wisdom not only deserves credit for the heroic exploits of antiquity, but is available today … to us … in our challenges and temptations.

In the next two chapters, “Solomon” applies the conventional reward/retribution scheme to the story of Israel’s deliverance from Egyptian servitude and sojourn in the Sinai desert. Wisdom “prospered their works by the hand of a holy prophet [Moses]” (11:1), enabling them to endure hunger and thirst, “disciplining them in mercy” (11:9) for their sins, and punishing their pagan enemies with great harshness. A particularly revealing comment, addressed directly to Lady Wisdom, describes her chastisement of the Egyptians for their idolatrous worship of animals:

In return for their foolish and wicked thoughts,
which led them astray to worship irrational serpents and worthless animals,
you sent upon them a multitude of irrational creatures to punish them,
so that they might learn that one is punished
by the very things by which one sins (11:15–16).

There is a kind of symmetry between the sins the Egyptians had committed and the plagues God visited upon them to force them to let his people go (compare 12:23).

The Canaanites, who had occupied the Promised Land during the time when the children of Israel dwelled in Egypt, come in for similar treatment. Once again, “Solomon” addresses Lady Wisdom, as the agent by which divine justice — though tempered by patience and mercy — is administered in the world.

Those who lived long ago in your holy land you hated for their detestable practices,
their works of sorcery and unholy rites, their merciless slaughter of children,
and their sacrificial feasting on human flesh and blood ….
But even these you spared, since they were but mortals,
And sent wasps as forerunners of your army to destroy them little by little. (12:3–5, 8)

The unspeakably reprehensible sins of child sacrifice and cannibalism were initially punished, appropriately enough, by the bites of insects. Unfortunately, the Canaanites didn’t take Wisdom’s warning to heart, and, after failing to take advantage of the God-given opportunity to repent (12:10), they were annihilated by the armies of the Lord.

The key point in these diatribes against the Egyptians and Canaanites is that divine Wisdom enlightens and empowers Israel to be herself — that is, to escape the unrighteousness and folly characteristic of other nations and to abide by the “oaths and covenants full of good promises” (12:11), which God had first established with her ancestors, and which are still binding.

Chapters 13 through 19 are a lengthy polemic against the foolishness of idolatry. Yahwism is affirmed in uncompromising terms, and the practices of Israel’s polytheistic neighbors are vilified and mocked. Yet a grudging concession is made along the way. Unjustifiable as idolatry is, it is also understandable. Those who contemplate “the greatness and beauty of created things” (13:5) are supposed to perceive the transcendent greatness and beauty of the Creator.

But what’s to prevent people from confusing the creatures with the Creator, from attributing divinity to created things precisely because of their greatness and beauty? Paganism and pantheism are seductively attractive doctrines for aesthetically sensitive souls. Hence, says “Solomon,” nature-worshippers are “little to be blamed, for perhaps they go astray while seeking God and desiring to find him” (13:6). What is it that enables people to enjoy the goodness of nature with pious gratitude, while steering clear of the temptation to absolutize it?

The answer is: the contemplation of the mighty works of God in the history of Israel. God has established an irrevocable covenant with his chosen people, has repeatedly delivered them from enemies and oppressors, and has promulgated righteous laws that secure their freedom. The antidote to idolatry is memory. The Wisdom of Solomon concludes with this ringing doxology: “For in everything, O Lord, you have exalted and glorified your people, and have not neglected to help them at all times and in all places” (19:22).

In short, internationalism must be rejected, not because the sages of other nations lack either genuine insight into human affairs or a true appreciation of the glories of creation. On the contrary, they possess these praiseworthy traits in full measure. What they lack are those spiritual resources that prevent self-insight from turning into self-congratulation, and that keep aesthetic sensitivity from turning into idolatrous naturalism.

It is precisely the remembrance of Israel’s glorious history, a history whose glory can be ascribed only to the guidance and protection of a just, righteous, sovereign, and all-wise God, that enables us to attain the highest wisdom of which the human heart is capable: the wisdom that accepts the vanity of life without despair, smiles at human folly without bitterness, endures injury without rage, and accepts the inevitability of death without fear.

“Cultus” refers to a system of religious observances. In the Jerusalem temple, these would have been the performance of sacrifices and the celebration of festivals. The word comes from the Latin colere, meaning “to till the ground,” and ancient pagans did indeed understand worship as a means of “cultivating” their deities — i.e., paying them homage in order to secure their blessings.

Jews and Christians have sometimes been guilty of such pious commercialism, too, but I am not implying here that worship in the Jerusalem Temple was necessarily guilty of it. Nor should the word “cultus” be confused with its modern derivative, “cult,” which refers to a renegade religious sect, usually under the control of a charismatic (and sometimes criminally insane) leader.

The belief that Yahweh is abidingly present to his chosen people in their journey through history, though sometimes silent, veiled, and apparently inactive, see the two earlier Lectio series, “Genesis/Exodus” by Dr. Frank Spina and “Selections from Israel’s Story” by Dr. Sara Koenig.

For a brief discussion of the authorship of the Wisdom of Solomon, see Week 8, Author’s Note 2.

A modern Jewish Passover ritual, referencing the two passages just cited, underscores this point: “The wicked person says, ‘What is this observance to you?’ Since he says ‘to you’ and not ‘to us,’ he rejects the essentials of our faith: the unity of God and the community of Israel.” Herbert Bronstein, ed., A Passover Haggadah, rev. ed. (New York: Penguin Books, 1978), p. 30.

<<Previous Lectio   Back to Wisdom Literature