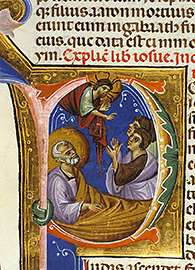 In the Gospel of Matthew, Jesus tells a parable about two brothers in the same situation (Matthew 21:28–30) — the father tells them both to “go and work in the vineyard today.” Only one does the right thing; while he originally tells his father “no,” he later changes his mind and does as he was told. While his answer is not ideal, Jesus explains, the good son ends up doing “the will of his father” (21:31). What about the other son? While he first says “yes,” he flakes out and does not obey his father.

The point, obviously, is that God cares more about true obedience than about temporary assent or lip service. God wants a people who ultimately listen and follow. How applicable this parable is to the Old Testament and the story of Israel, our spiritual ancestors! Essentially, Joshua and Judges recount the journey of the second son (Israel), so to speak, as God’s people are told to fully obey YHWH’s will and they promise to do so.

And yet, as the story unfolds, bad decision after bad decision ensues; they clearly have disobeyed God. What was meant to be a land flowing with milk and honey ends up a land flooded with Canaanite enemies, idols, scandals, and bloodshed.

Nobody Likes Change: The Death of Joshua

In the former, it is a transition from wilderness wandering to “settled” people in the Promised Land. In the latter, the outlook is not so bright. The death of Moses at the beginning of the book of Joshua transitioned rather smoothly into the raising up of Joshua as the leader of the people. Joshua 1:1–9 describes the passing of the mantle of authority from Moses to Joshua.

But Judges gives us no such continuation of leadership. Rather than God’s speaking to the next leader of the people (as in Joshua 1:1–9), the Israelites “inquired of the Lord” (Judges 1:1). This already hints at the fragmentation of the people, as they are seen more and more as different tribes who are only thinly connected by religion and politics.

These books of the Old Testament are generally viewed as history under the leadership of two key figures — Moses and Joshua. Next we have “the book of Judges.” Leadership has moved from one stable (long-term) national figure to a number of relatively short-lived “judges.” Clearly, “after the death of Joshua,” the 12 tribes of Israel are in a new phase of life, but the story of the judges, chapter after chapter, recounts a rather bleak tale of failure and disobedience, save one or two decent leaders.

Before discussing this book any further, it is important to explain (especially to modern readers) what the Old Testament means by “judges.” If you have in mind (as I used to) prominent government officials with gowns and gavels, put those thoughts aside!

The Hebrew word that is translated in our Bibles as “judge” differs greatly from what we conceive of as a judge. Such men and women in Israel were more like “agents of justice.” This could be conceived of internally — as in the judge’s responsibility to make sure “justice” was secured within Israel itself. In that sense, the legal roles would be somewhat similar to our own use of the term “judge.”

However, a major duty of an Israelite judge as an “agent of justice” was to be a military leader in times of external threat and injustice — in that sense judges were looked upon as warrior-heroes, “saviors,” if you will (note the language of rescue and deliverance in Judges 6:14; 10:1; 13:5). Another way to say this would be that the “judges” were defenders of Israel’s shalom (or “peace”) in whatever way was necessary.

While the book of Judges names a dozen such people, only six are discussed in any detail: Othniel, Ehud, Deborah, Gideon, Jephthah, and Samson. Each one was “raised up” from the tribes of Israel to help deliver God’s people from such threats as the Moabites, Philistines, Midianites, and Ammonites. These men and women were not kings with royal lineage. Nor were they bred from youth to fight as great warriors with weapons training and military strategy. They were relatively ordinary tribespeople called for a time to step in and lead.

There Was No King in Israel …

Toward the end of Judges, the line is repeated “In those days there was no king in Israel” (17:6; 18:1; 19:1; 21:25). The purpose of making this statement was for the author of Judges to emphasize that the period of the judges was an unfortunate time of Israel’s history between the leadership of Joshua, on the one hand, and the rulership of the Israelite king, on the other hand.

While some judges did a better job than others, clearly this phase of history was one of Israel’s lowest. Indeed, after the statement “In those days there was no king in Israel,” the sentence ends like this: “all the people did what was right in their own eyes” (e.g., 17:6).

What’s the big deal? Why was there such an emphasis on having or needing a king? One of my favorite movies is The Patriot, which offers a fictionalized portrayal of the American Revolutionary War. When an assembly of men in Charleston gathers to discuss whether or not to oppose Great Britain and fight alongside the colonists, one man declares: “We are citizens of an American nation and our rights are being threatened by a tyrant 3,000 miles away.”

Mel Gibson’s character, Benjamin Martin, rebuts: “Why should I trade one tyrant 3,000 miles away for 3,000 tyrants one mile away?” I think you could say something similar of Israel when, without proper leadership, the self-ruled people, as The Message puts it, “did whatever they felt like doing.”

Help! I’ve Fallen and I Can’t Get Up!

The disease of all Israelites choosing their own good led to a number of symptoms, the most prominent ones being idolatry, greed, murder, and mistrust of their own God. All of these were signs of the breaking of the covenant and disobedience to God’s commands — i.e., sin. Judges 1:1–3:6 focuses on two major aspects of Israel’s disobedience: failure to drive the Canaanites out of the Promised Land and failure to keep themselves exclusively focused on their one God. From these two major sins flowed a river of misery and difficulty for the people.

The book of Judges depicts Israel stuck in a vicious cycle. First comes commitment and a starting point of hope (like God’s raising up of a judge). Then comes an act of rebellion or disobedience on the part of Israel. Next, God punishes his people for their breach of trust, with the punishment often taking the form of handing them over to their enemies (see 2:14). Finally, Israel cries out in pain and remorse — and the cycle starts over.

Scholars sometimes refer to Judges as narrating the “Canaanization of Israel.” At the beginning of the book of Joshua, the dividing line between the holy people of God (Israelites) and the apparently reprobate pagans (Canaanites) is rather clear. However, by the time we get into the book of Judges the lines begin to blur (as they did with Rahab the faithful and Achan the greedy), such that, in the end, the Israelites could blend in morally and spiritually with the Canaanites.

Is There No Hope?

I would imagine that this question — Is there no hope? — was constantly on the minds of God’s people in this period.

[T]hey lusted after other gods and bowed down to them. They soon turned aside from the way in which their ancestors had walked, who had obeyed the commandments of the Lord; they did not follow their example (2:17b).

Indeed, as mentioned above, they looked less and less like God’s holy priesthood (see Exodus 19:6) and more and more like the very Canaanites they were meant to separate themselves from. But, as Israel faded into the dark landscape of Canaanite ways, this brought out with greater contrast the vibrant colors of YHWH’s unfailing grace and mercy towards his people. Again, after each act of rebellion and the subsequent consequence of foreign oppression, YHWH would give them a judge to save them.

Whenever the Lord raised up judges for them, the Lord was with the judge, and he delivered them from the hand of their enemies all the days of the judges; for the Lord would be moved to pity by their groaning because of those who persecuted and oppressed them (2:18).

While this is certainly a positive notion, the question might linger: Was the Lord wrong or unjust to allow Israel to repeat this cycle of failure and misery? One reason YHWH does allow this, we learn from Judges, is that he wanted to “test” them, “whether or not they would take care to walk in the way of the Lord” (2:22).

So, to respond to the question, Is there no hope?, I would repeat the psalmist’s exhortation, “Hope in the LORD!” (Psalm 130:7; 131:3). While God hates sin, the book of Judges reminds me of the Apostle Paul’s universal truth: “where sin increased, grace abounded all the more” (Romans 5:20). It is a mistake to attribute this idea only to the God of the New Testament who sent Jesus. Undoubtedly Paul, before he met Christ, would have known YHWH to be the God of mercy and grace (though certainly the merciful love of God would have shined brightly through the cross).

When you read the book of Judges, it can be a downer, for sure! But we must remember that it has a role in the grander story of God’s history with and for his people. Again, Judges eventually reminds the Israelites that this grim tale of tragedy and regret is set in contrast to the future rule of an Israelite monarch — especially good King David. And that is a foretaste of the greater rule of King Jesus. But we are getting ahead of ourselves. For now we will focus our attention on the life and times of Israel’s judges.