A Merciful and Gracious God: Exodus 33–34 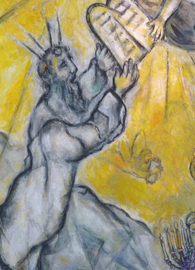 When Moses interceded for the Israelites because of the golden calf in the previous chapter, God said to Moses, “you will lead the Israelites, and I will send an angel to go before them” (Exodus 32:34). The implications of God’s words get spelled out more clearly at the beginning of Chapter 33, as God explains, “I will send an angel before you … but I will not go up among you, lest I consume you on the way, for you are a stiff-necked people” (33:2–3). This is a sign of judgment: God intends to withdraw from the people.

The people’s response is to mourn and remove their “ornaments” (Exodus 33:4). Commentators have long debated what these are, as sometimes they appear in the Old Testament as positive decorations (e.g., 2 Samuel 1:24; Isaiah 49:18), sometimes as gifts given by God (e.g., Ezekiel 16:7, 11), and sometimes as objects of criticism (e.g., Ezekiel 23:40). Whatever the exact nature of the ornaments, they are significant in this passage for two reasons:

After some description of the tent of meeting (Exodus 33:7–11), a remarkable conversation takes place between God and Moses. Indeed, we are told in Exodus 33:11 that “the Lord used to speak to Moses face to face, as one speaks to a friend.” Moses initiates the conversation, saying “Look, you said …” (Exodus 33:12). By referring back to God’s previous statements and promises, Moses is holding God to what God had said. Moses demonstrates that the word of God is something in which we can trust, something to which we can appeal.

Moses then presents his first request in Chapter 33: “show me your ways that I may know you, in order to find grace in your sight. Consider too, that this nation is your people” (33:13). God responds to this request by saying, “My presence will go with you, and I will give you rest” (33:14).

Seems nice, right? Rest is often connected with the promise of the land, so God is reiterating that the promises of the past, particularly the promise of land, will come true. However, our English pronouns don’t reveal something that is evident in the Hebrew: the “you” in Exodus 33:14 is a singular you, not a plural.

So it is as if God told Moses, “I will give rest to you, Moses,” not, “I will give rest to all of you Israelites.” In Exodus 32, God told Moses that he would destroy all of the Israelites and start anew with Moses (32:10). Moses did not like that then, nor does he like the implication now, for he responds by saying, “If your presence is not going, do not cause us to go up from here” (33:15).

For Moses, there is no me without the rest of the Israelites, and he makes that even clearer in Verse 16, when he says, two times, “I and your people ….” Moses makes a profound statement in this verse: what makes the Israelites distinct from the rest of the nations is God’s presence with them — literally, God’s going with them. In other words, Israel’s identity is inextricably intertwined with God’s being with them. There is no Israel without God who accompanies them. Therefore, Moses asks that God will go with all of them.

To this second request, God responds positively: God will do the very thing that Moses asked. The reason, God explains, is that Moses (literally, “you” in the singular form) found favor or grace in God’s sight, and God knew Moses by name.

Moses then has another request — to see the glory of God. To this, God responds by saying that Moses can see God’s goodness, and will hear God’s name, but he cannot see God’s presence. These are all distinct terms in Hebrew as well as English. God’s glory is the Hebrew word kabod, the word for goodness is tov, and the word for name is shem, whereas the word for presence is panim, the same word as “face.” Moses asked to see God’s kabod, and God said Moses could not see God’s panim, God’s presence or face.

The request to see God in an unmediated form is denied — even to Moses, the great mediator. Again, we must remember that these texts are within the greater context of the instructions about the tabernacle, the vehicle for God’s being with the people.

In Exodus 32, one of the motivations driving the Israelites to request the golden calf was their desire to have God be with them in a form that they could manage and control. Moses appears to have his own desire: not to manage or control God, but to see him visibly. Amidst all the conversations with God, despite the previous mentions of God’s glory (Exodus 16:7, 10; 24:16, 17), Moses wants more.

Some have criticized Moses for making what they see as a selfish request. They wonder what, if anything, this request to see God’s glory has to do with interceding for the Israelites, or for their plight? Exodus 34 will remind us that Moses never forgets to intercede for the Israelites: immediately after God reveals God’s name and identity (34:6–7), Moses returns to the theme of Chapter 33, asking God, “go with us. Although this is a stiff-necked people, pardon our iniquity and our sin …” (34:9).

Why does Moses ask — for himself — to see God’s glory? Again, God promised Moses, as an individual, everything — that he would be the new chosen nation, that he would be given rest. Moses proved by his responses that he is not self-centered. But he shows his personal desire here. Interceding for other people does not preclude wanting something for yourself, too. 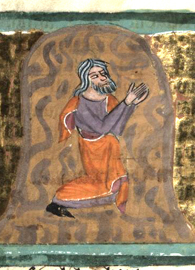 EnlargeNo One Can See God and Live

Though Moses’ request is denied, God gives an explanation and a concession. No one is able to see God and live [see Author’s Note 1], God explains (Exodus 33:20, 23), but Moses will be allowed to see God’s back. It is hard to ignore the paradoxes and anthropomorphisms, as God explains that God must put Moses in the cleft of a rock and shield Moses with God’s hand such that Moses may catch a glimpse of God’s back but not God’s face.

When God passes by Moses, what Moses gets is the proclamation of God’s name. God proclaims, “The Lord, the Lord, a God merciful and gracious, slow to anger, and abounding in steadfast love and faithfulness, keeping steadfast love for the thousandth generation, forgiving iniquity and transgression and sin, yet by no means clearing the guilty, but visiting the iniquity of the parents upon the children and the children’s children, to the third and the fourth generation” (Exodus 34:6–7).

But Moses need not feel cheated in any way — this self-revelation from God identifies God. God’s glory and God’s goodness are that God is a merciful and gracious God [see Author’s Note 2].

Moses responds by bowing, worshipping, and returning to the theme of God’s presence accompanying the Israelites. By saying in 34:9, “If now I have found favor in your sight,” it is almost as if he is reminding God of what God told him back in 33:17, that Moses had found favor in God’s sight. As before, Moses makes no attempt to defend the Israelites, calling them “a stiff-necked people,” but he nonetheless asks God, “pardon our iniquity and sin, and take us for your inheritance” (Exodus 34:9).

The explicit mention of the broken tablets in 34:1 reminded us of what happened in Chapter 32, but 34:10–28 is when the covenant gets remade and restored. Verse 34:1 also emphasizes that God will write on the tablets — like before! — as a concrete sign that Israel has been forgiven and the relationship has been restored. But this is not just a rewriting of the original laws on fresh tablets; if it were, we would expect an exact repetition of Exodus 20. Instead, we find a series of laws which are related to those in Exodus 13:20–23. In that way, this chapter upholds the importance not only of the Ten Commandments, but of the other laws that God gave to Moses and Israel.

Chapter 34 ends with a brief but significant description of what happens to Moses after talking with God. Verse 34:29 tells us, “Moses did not know that the skin of his face shone [see Author’s Note 3] because he had been talking with God.” This could be read in two ways: first, as giving us the reason for Moses’ changed appearance; because Moses talks with God, his face shines. But it could also be read as a statement about Moses’ changed perception: because Moses had been talking with God, he was unaware of his own appearance. In other words, what Moses knows about himself decreases in importance and perspective after talking with God.

When God appeared to Moses in the burning bush, Moses’ first question was, “Who am I that I should go to Pharaoh and bring the Israelites out of Egypt?” (Exodus 3:11). God’s answer then was, “I will be with you.” Though that is not a direct answer to Moses’ question, it suggests that Moses’ own identity does not matter as much as God’s presence with him. Here, too, we see the same theme. Moses is one of the greatest mediators for God. But who Moses is by himself is insignificant. It is his relationship with God that matters most.

Parallels in Chapters 34 and 20

But Moses calls to them. It is significant that Aaron and all the leaders return to him, after what Aaron had done in Chapter 32, and Moses speaks with them before speaking with the rest of the Israelites and telling them God’s commandments. Only when Moses finished speaking with them did he cover his face with a veil (34:35).

Paul picks up this final aspect of Exodus 34 in his discussion of the ministry of the Spirit in 2 Corinthians 3. Like many of Paul’s writings, it is a complex interpretation of the Old Testament to drive home his theological point.

These chapters, which have discussed the identity of Moses, of Israel, and of God, also point to an identity possible for those who follow God today. Moses, who speaks the word of God to the people and intercedes on behalf of the people to God, never becomes a deity himself. He is only a reflection of God’s glory.

In 2 Corinthians 3, Paul explains that, with the help of the Holy Spirit, all of us may be so transformed that our own lives reflect God’s glory to a dark and broken world, a world that is in the same need today of a gracious and merciful God.

I discussed the problems with the description of God visiting punishment on children in the Lectio for Exodus 20, as the same language comes up in the commandment against making idols.

The Hebrew word for “shine” is related to the noun qeren, which means “horn,” often appearing in the sense of a ray as a symbol of divinity in the Ancient Near East (compare Habakkuk 3:4). The Vulgate (the Latin translation of the Old Testament), however, took it literally that Moses had horns on his head, which led to a number of artistic pictures of Moses with horns on his head.