Selections From the Prophets Week 5

A Famine for the Word of the Lord: Amos 8 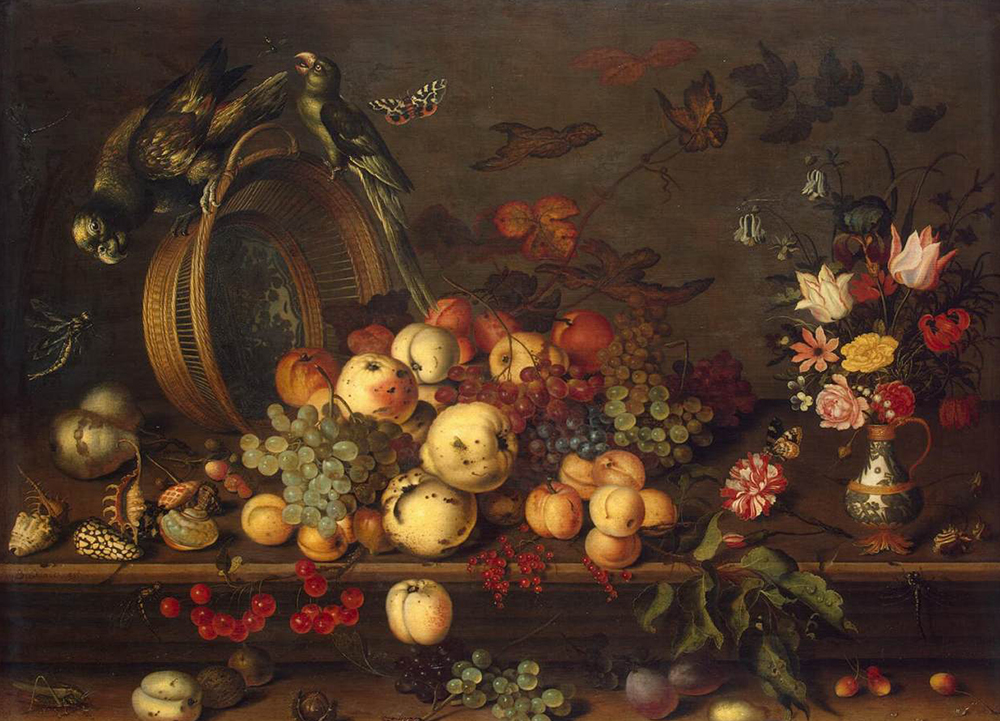 “The end has come upon my people Israel;
I will never again pass them by.
The songs of the temple shall become wailings in that day,” says the Lord GOD;
“the dead bodies shall be many,
cast out in every place. Be silent!”
….
On that day, says the Lord GOD,
I will make the sun go down at noon,
and darken the earth in broad daylight.
I will turn your feasts into mourning,
and all your songs into lamentation;
I will bring sackcloth on all loins,
and baldness on every head;
I will make it like the mourning for an only son,
and the end of it like a bitter day.
The time is surely coming, says the Lord GOD,
when I will send a famine on the land;
not a famine of bread, or a thirst for water,
but of hearing the words of the LORD.
They shall wander from sea to sea,
and from north to east;
they shall run to and fro, seeking the word of the LORD,
but they shall not find it.

Visible Images That Conceal Nothing

In 1928, a young painter in Brussels struggled with the post-World War I world he saw around him. As Europe tried to regain a sense of identity and purpose, it became popular for politicians to issue statements of idealism and false optimism, which, while attempting to encourage the broken spirits of millions, only reinforced the distance between full restoration and the ugly, broken reality of day-to-day life.

Putting his brush to the canvas, René-François-Ghislain Magritte began painting a series of images in the style of surrealist André Breton that were deceptively simple still-life paintings, because they subverted one’s ability to simply accept them as representations of the so-called real world. One of Magritte’s most famous paintings of this period was titled The Treachery of Images (La trahison des images), which shows a pipe that looks as if it could have been reproduced from a tobacco store advertisement. At the bottom of the canvas, Magritte painted the words, “Ceci n’est pas une pipe” (“This is not a pipe”).

When you look at the image and the text below it, you are left with a seeming contradiction: Which statement is true? Do you trust the image, or do you trust the text? Magritte is making a bold move in this piece by forcing the viewer to admit that the text is a true statement: the painting is not a pipe; it is, rather, an image of a pipe. When Magritte was asked about the painting, he matter-of-factly replied that of course it was not a pipe: “Just try to fill it with tobacco.”

What Do You See?

Similar to the experience of viewing Magritte’s painting, when we reflect upon the images prophets are calling us to consider, we can come to a point of scratching our heads and asking, “What does that mean?”

Central to Amos as well as many of the other prophets is the challenging of the people of God not to rest too comfortably on the image they have of themselves. As Abraham Heschel states,

[T]he most beautiful face lends itself to caricature, to a ludicrous exaggeration of some of its features. And the sublime ideas of biblical faith are equally subject to caricature…. From the beginnings of Israelite religion the belief that God had chosen this particular people to carry out His mission has been both a cornerstone of Hebrew faith and a refuge in moments of distress. And yet, the prophets felt that to many of their contemporaries this cornerstone was a stumbling block; this refuge, an escape” [Author’s Note 1].

The Book of Amos was likely written between 760 and 753 B.C. during the reigns of King Uzziah, who ruled over Judah, and King Jeroboam II, who ruled over Israel [Author’s Note 2]. In this way he is a contemporary of Hosea and Jonah, whom we will encounter later in our selections from the prophets. Amos is a common person, neither of royal lineage nor from an established prophetic line. He is from the small rural community of Tekoa, approximately two hours walk from Bethlehem, which itself is a small town in comparison to Jerusalem. As a person on the margins of society, Amos represents a powerful image — we are told he is indeed a prophet, due to God’s calling:

I am no prophet, nor a prophet’s son; but I am a herdsman, and a dresser [ḇôlēs] of sycamore trees, and the Lord took me from following the flock, and the Lord said to me, “Go, prophesy to my people Israel” (7:14-15).

As a dresser, or pruner (bôlēs), of sycamore trees, Amos applies his skill to Damascus, Gaza, Tyre, Edom, Ammon, and Moab — [cities or capitols and] nations that oppress the weak—and then to his own nation of Judah, and finally to Israel, for which the harshest judgment is reserved. As a bôlēs [Author’s Note 3], he desires to cut away — literally “pinch away” — those things that are preventing fruitfulness, and the verbal shears of prophetic pronouncements offered throughout the text attack the dead wood of greed, violence, and those who “trample on the head of the poor into the dust of the earth and push the afflicted out of the way” (2:7).

As we discussed in the previous Lectio, the “day of the Lord” for Amos is similarly a total vision where God brings complete judgment to all the earth, exemplified in Judah and Israel. As we hear these strong words of judgment, we are left with a difficult image of a God we want to see as loving, compassionate, slow to anger, and abounding in love, but who is instead acting with total destruction. In this way we are left asking whether this is God or not. What is evident is similar to the surrealism of René Magritte, in that the “visible images conceal nothing” — everything is laid bare — and the dead branches are to be stripped away.

Rāʿāḇ — A Hunger for the Word of the Lord

In our reading for this week, God shows a basket of summer fruit and asks Amos a seemingly innocuous question in Verse 2 — “Amos, what do you see?” — to which Amos replies, “A basket of summer fruit.” Throughout the prophetic literature we find God calling the prophets not only to see what is before them on a literal level, but to look through seemingly basic things to the deeper meaning beyond.

As God responds to Amos, he doesn’t mention the bowl of summer fruit again, but enlarges this metaphor — a bowl of fruit that is past its prime, fruit that has fallen from the tree and perhaps lies rotting on the ground but has now been gathered up and placed before the prophet for inspection. The qualities of this image exemplify the status of Israel — the people have been offered sustenance from the Lord yet have relied on their own pride. So plentiful is God’s provision that it is falling ripe from the tree, and now lies in the grass unacknowledged and rotting. In our passage for this week, Amos’ vision points to one of the greatest famines of all. As we hear in Verses 11 and 12, what the people hunger for is not mere fruit:

The time is surely coming, says the Lord GOD,
when I will send a famine [rāʿāḇ] on the land;
not a famine [rāʿāḇ] of bread, or a thirst for water,
but of hearing [šāma’] the words [ḏāḇār] of the LORD.
They shall wander from sea to sea, and from north to east;
they shall run to and fro, seeking the word of the LORD,
but they shall not find it.

The word translated in the NRSV as famine is rāʿāḇ, which is an acknowledgement of hunger [Author’s Note 4]. Without the word of the Lord to sustain, correct, instruct, and direct the people, they are doomed to wandering without direction and becoming destitute. The people are gorging themselves on things that are not of God and yet trying to assert that they are still in God’s favor. Amos is letting them know that they cannot have it both ways: the Lord will abandon them for a time to this wayward lifestyle in the midst of the rotting fruit in order to provoke a hunger for what actually nourishes and sustains: the words of the Lord. They will have to change their ways.

With each pronouncement of Amos there is embedded a call to repentance in the form of modest living, accountability, and social justice. Through these actions of piety, the people can begin to hear the word anew. There is a way to find the word of the Lord after all. Holiness is the path to seeing clearly what is before us and the true implications of what we see. There is still hope for some, but it might indeed be too late for others, and the life we have grown accustomed to may now be something of the past.

As Amos concludes, attention is turned to a vision of restoration that is a theme in many of the prophets. God does return, restore, and reconcile:

I will restore the fortunes of my people Israel,
and they shall rebuild the ruined cities and inhabit them;
they shall plant vineyards and drink their wine,
and they shall make gardens and eat their fruit.
I will plant them upon their land,
and they shall never again be plucked up
out of the land that I have given them,
says the LORD your God.
(9:14–15)

We are given the tools to see and hear (šāmaʿ) the words (ḏāḇār) of the Lord that are clearly before us, as Amos proclaims throughout his visions — to live righteously, to serve the least of these, to bind up the wounds and provide consolation for the brokenhearted, to live within our means and generously give to others what has been given to us. In this way we can begin the journey of seeing that what is before us may very well deserve the title, “Ceci n’est pas une vie” (“This is not a life”), to the befuddlement of some and the salvation of others.

As noted by Jennifer Dines, in the opening of Hosea,

Ḇālas: “to pinch sycamore figs (a process necessary to ripen them) — gatherer” James Strong, Dictionary of the Hebrew Bible, in The New Strong’s Exhaustive Concordance of the Bible (Thomas Nelson Publishers, 1984), ḇālas 1103, p. 21.

2 Comments to “A Famine for the Word of the Lord: Amos 8”