Selections From the Prophets Week 13 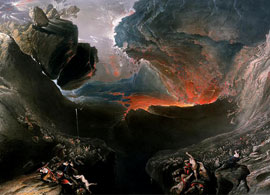 Dies Iræ: The Day of Wrath

In the Vulgate (the late fourth- and early fifth-century translation of the Bible by St. Jerome), Zephaniah 1:15–16 is translated as follows:

(“That day is a day of wrath, a day of tribulation and distress, a day of calamity and misery, a day of darkness and obscurity, a day of clouds and whirlwinds, a day of the trumpet and alarm against the fenced cities, and against the high bulwarks.” (Douay-Rheims translation)) [author’s Note 1]

This notion of the “dies iræ,” or “day of wrath,” has framed the writing of requiem masses by Mozart, Verdi, Stravinsky, and Berlioz; has been the foundation for Gregorian chant and four-line medieval neumatic plainchant; and has served as the theme for the Catholic liturgy for centuries. This day of wrath has become a cultural mood in mass culture as well, evoking from the end-times fervor of alien-invasion films to apocalyptic novels such as the Left Behind series. Needless to say, our culture has long been concerned with the end times, and the horror of God’s finally coming in vengeance is not just the stuff of the Cineplex or Mozart’s Requiem. As we shall see in our reflections drawn from the prophet Zephaniah, the day of wrath is a very real thing. Yet it is only part of the story.

There is a dearth of unambiguous references to historical events and, as we shall see, there appears to a be a tendency towards a more generalizing interpretation of earlier prophetic material, which may suggest a complex redactional process as earlier oracles were edited, exegeted, and found to be relevant in new situations. [Author’s Note 2]

Two things we are to hear in this: that in order to understand Zephaniah fully we must reflect back on some of the themes already addressed in previous Lectios, and that, as William Shakespeare put so eloquently, the “past is prologue” [Author’s Note 3], in that what has come before will always help us understand our present and our future. What is clear through the canonization of Zephaniah is that, although this book offers in many ways a repetition of themes already encountered, by returning to them we are to reread them in light of today and tomorrow. David Peterson lists the summary nature of Zephaniah in this way:

In sum, the book of Zephaniah deploys many Israelite images and traditions in formulating its speeches. Day of the Lord, creation, Zion, and covenant traditions are only the most prominent of such rhetoric. [Author’s Note 4]

“On That Day” — A Descendent of Kings Who Challenges the Kings

As the first verse tells us, Zephaniah is the “son of Cushi son of Gedaliah son of Amariah son of Hezekiah, in the days of King Josiah son of Amon of Judah.” (1:1) Scholars have generally accepted this designation, which places Zephaniah as the great-great grandson of Hezekiah, king of Judah from 715 through 697 B.C., and also a distant relative of King Josiah, who reigned from 640 to 609 B.C. [Author’s Note 5]

Other than this lineage, there is little else we know about the prophet. Given the dates found in this lineage, Zephaniah is associated closely with the prophesies of Nahum and Habakkuk at the end of the seventh century, yet this royal lineage puts Zephaniah in a particular position with which to challenge the systems of power that have silenced the ways of God. He begins his indictment of the royal households in 1:8–9:

And on the day of the Lord’s sacrifice I will punish the officials and the king’s sons and all who dress themselves in foreign attire. On that day I will punish all who leap over the threshold, who fill their master’s house with violence and fraud.

The refrain “on that day” brings us back to our previous reflections (see Week 4 and Week 12) on the use of yôm for “day” as not denoting merely a 24-hour period. Here the refrain “on that day [yôm]” is repeated over and over throughout the first chapter, akin to the sound of waves crashing against the shore, with each successive wave pulling back another stain to leave the earth pure once again. This is particularly evident in 1:14–16:

What is clear is that the “day of the Lord” in Zephaniah is that place and time where and when nothing will stand that is not of the living God. This total devastation of systems of power and oppression is not merely temporal and earthly, but carries a level of cosmic totality by bringing us back to the creation narrative. In 1:2–3 we see that the entire created order will be swept away:

I will sweep away humans [adam] and animals; I will sweep away the birds of the air and the fish of the sea. I will make the wicked stumble. I will cut off humanity [adam] from the face of the earth [adama], says the Lord.

Here the framing of the language calls to mind the creation narratives of Genesis 1:26–27, where humans are brought into being and given stewardship and dominion over the face of the earth in Genesis 2:5–9. Zephaniah offers a reversal of Genesis: where God had bound humans to the earth, now the entirety of creation is separated from them, and creation itself is swept away. 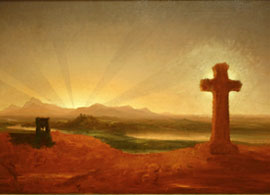 A Day That Dawns Bright — a Call to Holiness

While the dies iræ — the day of wrath — has been framed in our cultural imagination by requiems, cinematic apocalypses, and fear-provoking book series about the end of the world, the world does not end this way in the prophesy of Zephaniah. No, as we move into the words of Chapter 3, the prophet turns the day of the Lord from a place of darkness to a dawning of light and hope:

On that day [yôm] you shall not be put to shame
Because of all the deeds by which you have rebelled against me;
For then I will remove from your midst
Your proudly exultant ones,
And you shall no longer be haughty
In my holy mountain.
For I will leave in the midst of you
A people humble and lowly.
They shall seek refuge in the name of the Lord —
The remnant of Israel;
They shall do no wrong
And utter no lies,
Nor shall a deceitful tongue
Be found in their mouths. (3:11–13)

It is as if the narrative of destruction comes to an abrupt halt and turns around to shine a spotlight on a singular reality that is a still point of calm and peace. Here the same day (yôm) of the Lord is now opened to embrace a people who have chosen to walk in the ways of humility, lowliness, and truth. These people are called to a holy life and will bear evidence to the generations of what it means to seek after the Lord, and not their own power and prestige borne on the backs of the oppressed. They shall do no wrongs nor slander in deceit, for their mouths shall be filled with the words of the Lord.

What an amazing promise in the midst of such wrath and destruction. Yes, God takes seriously the work of justice and righteousness, and calls us to turn and face him fully even if it means the end to all that we have previously known and cherished. Yet this same God desires us to live into a life worthy of our calling and not merely be destroyed in the wake of sin. In some respects, this means acknowledging that what we have and what we have become indeed come to an end, and an apocalypse of sorts is on our doorstep.

But, according to Zephaniah, there is still a call to repentance even in the face of doom. “What good will it do,” we might ask, “to turn around and seek a humble and lowly life after we have led a life of brokenness and sin?” As we saw in our Lectio reflections on Jonah a few weeks ago, it is not our job to worry about whether it is worth turning to holiness. Rather, turning to holiness is what we are to do regardless of the outcome. For the city of Nineveh the outcome was so miraculous that even the prophet couldn’t believe the truth of it.

Perhaps this will be your story as well. You may feel that your life has gone so far astray that the wrath of God will be a welcome relief. But perhaps the apocalypse is the easy road and not your calling after all. Why? Because, as we see in Zephaniah, we were meant to sing as our last song not the dies iræ after all, but a song of rejoicing and exaltation found in a life of holiness before the God who embraces and loves:

Sing aloud, O daughter Zion;
shout, O Israel!
Rejoice and exult with all your heart,
O daughter Jerusalem!
The Lord has taken away the judgments against you,
he has turned away your enemies.” (3:14–15)

See the “Prophesy of Sophonias” from the Latin Vulgate with Douay-Rheims English 1582/1610 translation.

She that is queen of Tunis; she that dwells
Ten leagues beyond man’s life; she that from Naples
Can have no note, unless the sun were post —
The man i’ the moon’s too slow — till newborn chins
Be rough and razorable; she that — from whom?
We all were sea-swallow’d, though some cast again,
And by that destiny to perform an act
Whereof what’s past is prologue, what to come
In yours and my discharge.